What is the effect of sharpening ski edges at different angles (85-90) and with different grit diamond stones (150-1200+) or regular files?

How does this relate to the level of the skier and the type of snow?

Don't do it. It is really easy to ruin a perfectly good pair of skis. A great way to handle ski maintenance is to wax your own skis, touch up the burrs with a fine grit diamond stone (400-grit or so), and let a professional ski shop handle your edges a couple times per season. This would be analogous to doing your own oil changes on a car, but letting a mechanic deal with fixing the brakes and replacing the spark plugs.

That being said, if you are mechanically competent and approach ski tuning methodically, maintaining your ski's edges isn't truly that hard. If you're capable of sharpening a quality knife, you are already halfway to being able to tune ski edges.

The one stop recommendation for edge bevels: 1 degree base edge, 91 (aka 1 aka 89) degree side edge. More aggressive angles are more aggressive, but can also be terrifying and potentially dangerous. Seemingly minute changes (less than half a degree) majorly impact how a ski behaves. Some ski manufacturers will give their recommended edge angles for specific skis (usually buried away in technical specs). Files are for rough shaping, diamond stones are for sharpening, smoothing, and removing burrs.

Even if you don't do your own tuning, knowing what you're after can help a ski tech give you a good tune.

This link from The Race Place gives a nice overview from which I'm cribbing and double-checking myself. My personal experience comes from 20+ years of tuning my own skis as well as working in ski shops off and on over the last decade.

This post is almost entirely about why you might choose specific edge angles; it is not a how to. If you want to see how to actually tune edges, check out these ski tuning videos:

The ski tuning world has lots of idiosyncrasies about the best way to do anything. For example, different ski techs will adamantly tell you to tune the base edge or the side edge first, or that all tuning strokes must go from tip to tail. Follow whoever's advice makes sense to you; the key is to do everything consistently and get the same tune on your skis every time.

Before even thinking of tuning edges, the base (ptex portion) must be flat from edge to edge. This is checked by holding a truing bar against the base of the ski and seeing if/where light shines through between the base and the truing bar while sighting along the base of the ski. For a quick check at home, any object known to be absolutely, perfectly flat can be substituted.

If the base is convex (edges lower than base, light shines underneath the truing bar at the edges), the ski will feel "washed out", hard to turn, or "wander-y". In effect, you will need to tip the ski over exceedingly far in order to turn. If the base is concave (edges higher than base, light shines under the center of the truing bar), the ski will feel twitchy and unpredictable. Whenever the ski is running flat, each edge will be fighting to turn the ski opposite directions, generally causing terror. You can also detect a concave base (edge high) by running the truing bar along the base of the ski and listening for the edges.

While very minor deviations from a flat base can be corrected at home (some dirtbags will use a small hand plane or sandpaper), it is best to get a "Stone Grind" from a reputable ski shop. This has the additional benefit of structuring the bases, which is important for optimal running characteristics. Additionally, a stone grind is your reset button (within reason) for edge angles if you have created a monster.

As with any tools, you get what you pay for. Generally well regarded brands for ski tuning equipment include Swix, Toko, Sun Valley Ski Tools, and BEAST. There are many others out there, many of which produce good stuff. If possible, try to buy from ski tuning / ski racing suppliers and avoid generic big box hardware store tools. Brands usually market their highest end tools as "World Cup Doo-Hickey Thingamajigger."

A file guide is used to ensure that you are shaping your edges to a consistent angle--keep in mind that we'll be discussing the differences between 1 and 2 degrees. Some World Cup ski techs have tuned thousands of pairs of skis and can do this freehand, but us mere mortals cannot.

Files (which can be shockingly expensive for truly top-notch ones) are used for removing large amounts of material, but leave a rough edge. Diamond stones are used to bring an edge the last few smidgens into spec and to smooth things out. Just like sandpaper, a 100-grit diamond stone will be coarser and remove more material, while a 1000-grit diamond stone will remove less material and leave a nicer edge. Diamond stones also have a side benefit: when you clip a rock with an edge, the remaining material can become work hardened, to the point that you could actually dull a file. A diamond stone can remove this outer layer, allowing your files to work properly on the underlying material.

You will generally only use your files a handful of times per season: when changing edge angles or repairing damage. Diamond stones are used for daily/weekly/monthly touch ups and sharpening. Think of it as caring for a fine kitchen knife: you wouldn't go set it up on a vice in the workshop and take a bastard file to it every time it was getting dull. That would only be the case if the edge chipped and you need to do major modifications. Instead, you would use a diamond stone / pocket stone / water stone / etc to restore the fine cutting edge.

For a bare bones home setup, I would recommend a cheaper file and a lower grit diamond stone (probably 200 or grit or so) as well as an adjustable file guide (one each, base edge and side edge). Additionally, you will need a ski vice (or similar) to hold the skis in place and something to hold the bakes back while you work (the rubber bands from the produce aisle work well). From there, suggestions for upgrades would be:

The list goes on from there, but you probably don't need this post if you need more ideas.

There Are Two Edge Angles

Base edge angles affect how far the point on your edges gets lifted off the snow when the ski is flat, and generally range from 0 to 3 degrees. A smaller angle will help the ski initiate turns quickly, but can make things happen a little too quickly. Terrifying. Conversely, a larger angle will take longer to initiate turns, but will be more predictable.

Oh, the humanity! There isn't a standardized way of measuring angles. Company A's 1 degree is Company B's 91 degree is Company C's 89 degree. European companies usually measure 86-90 degrees, while US companies usually measure 90-94 degrees. I will use the 90--94 convention. Adding on to that confusion, you must also take into consideration that both the base edge angle and side edge angle affect what angle is formed at the point. For example, a tune with a 1 degree base edge and a 92 degree side edge will have those edges meeting at an 89 degree point. As such, changing the base edge angle often, but not always, necessitates changing the side edge angle as well. 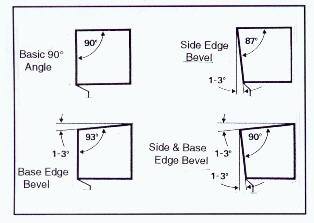 While 99% of skis should be tuned with a consistent edge angle from tip to tail, you can actually vary the base and side edge angles along the length of the ski. This starts to get into the dark arts of ski tuning, but can be beneficial for certain conditions and as a way of compensating for an individual skier's technique.

Here's a few scenarios with recommendations:

11
What is the effect of changing side and edge bevel on ski edges?

6
Should I re-wax downhill skis after using skins?
4
Relation of ski characteristics to skiing ability and snow conditions
3
How to learn ski touring
7
How does ski binding height affect skiing off-piste?
9
Can you "kick and glide" and climb without skins in Alpine Touring ski gear?
6
How do multi radius skis work in practice
3
Sharpening Base Edge on Skis
1
Ski for hikers?
6
How can I store skis in car without rust during ski season?
1
Weight distribution during ski carving