How do you remove leeches from your eyeball?

Leeches have been known to fall and attach on the eyeballs of hapless hikers. Where I'm from, if a leech attaches itself to you, you just spray it with alcohol and it will shrink and fall off. Obviously spraying alcohol on your eyes is not advisable.

I asked a guide how they would remove one in case it happened, and I was told we would either need tweezers or someone with sharp nails, but both seem to have an opportunity for further injury. I also read that you can just wait for the leech to get full and it will remove itself from you.

What is the best way to remove a leech from your eyes?

This story says that a saline solution was used and it was not pulled off.

Dr Fogg says tweezers were not an option as simply pulling the leech off could leave its head lodged in the eyeball, leading to infection.

A check of the medical literature revealed two other suggestions - using an anaesthetic on the eye to put the leech to sleep, or salted water.

The woman's husband had made an earlier unsuccessful attempt using salted tap water, before she went to Sydney's Royal North Shore Hospital.

"We numbed the eyeball so we could have a better look at it... but the leech wasn't apparently affected by it,'' Dr Fogg says.

Salt crystals also posed some risk of being "abrasive to the eyeball'' and so doctors turned to a hospital staple - saline solution which has many uses, including being used in intravenous drips for people who lack enough salt in their blood.

Saline solution was now recommended for the treatment of people with leeches on their eyeballs, and Dr Fogg says that was not as rare as it sounded.

The mass was identified as a tiger leech 'Haemadipsa picta' (Figure 1a). This was removed with direct application of cooking salt to the leech and gentle traction with forceps ensuring the head was not left in the wound.

This is a picture of a tiger leech. 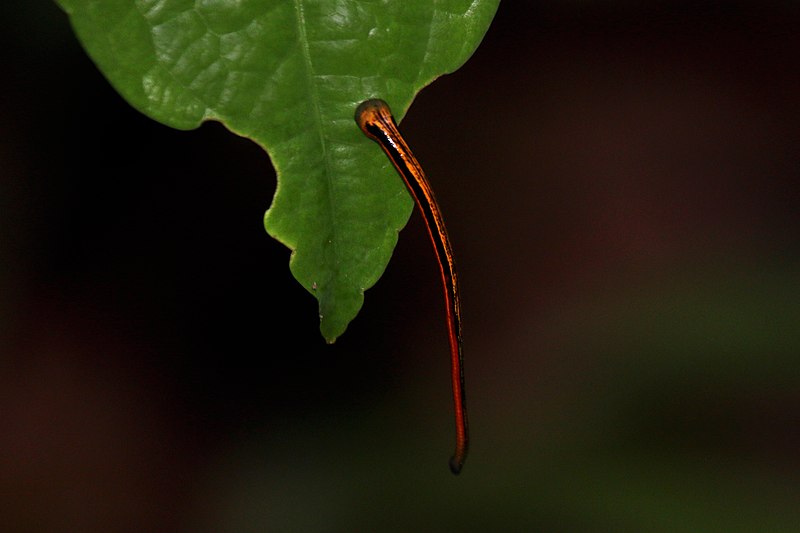 All emphasis is mine.

You should not take medical information from the internet and instead seek medical help if at all possible.

Not the answer you're looking for? Browse other questions tagged hiking safety first-aid leeches or ask your own question.