Is there any statistical evidence that hunting reduces the likelihood of mountain lion attacks?

There has been some discussion on this question about whether or not hunting would increase or decrease the likelihood of a mountain lion attack. I have seen some websites saying that it does not, but I am skeptical of their objectivity.

Have there been any reputable studies done on this? Or at least non-biased? As in not done by either hunting organizations or organizations who consider almost all hunting to be bad?

I do realize that the number of attacks is fairly low, but as this is can be a rather controversial subject, I would like to know if any research has been done on it?

There are two things we have to keep in mind with this subject. If the cougar populations are in decline anywhere, this would seem to mean that cougar attacks would naturally also be in decline. But if sport hunting is in fact contributing to mountain lion population declines but still not increasing public safety or reducing attacks on livestock, then other options for mountain lion management must be looked into.

Take a look at this article, which puts forth the idea that sport hunting does not reduce the likelihood of mountain lion attack:

The Mountain Lion Foundation initiated this study to test the claim that sport hunting reduces attacks on humans and predation on livestock.

To test the claim that sport hunting reduces conflicts, we looked to California, the only western state with viable mountain lion populations that does not allow sport hunting. Mountain lions have not been sport hunted in California since 1971, first as the result of a legislative moratorium and then as the result of a 1990 citizen sponsored ballot initiative which made the ban permanent.

Consequently, for 34 years California has served as a living laboratory to study the relationship between humans and mountain lions in the absence of sport hunting. It also presents an opportunity to test whether sport hunting has been an effective conflict-reduction strategy in states where it is allowed.

With regard to mountain lion attacks on humans in the western United States and Canada from 1972 (the first year of the sport hunting ban in California) to 2005:

With regard to mountain lion predation on livestock, according to data from the U.S. Department of Agriculture's National Agricultural Statistics Service (NASS 1995, 1996, 2000, 2001, 2005):

It is noteworthy that an increase in mountain lion attacks on humans in several western states during the 1990s occurred at the same time that the number of mountain lions killed by humans was reaching record levels. According to agency records, from 1990 to 1999:

In fact, some mountain lion experts have raised the possibility that sport hunting -- rather than decreasing the likelihood of attacks -- may actually increase the risk of attacks.

For further information on this subject please take a look at this entire article: Effects of Sport Hunting Mountain Lions on Safety and Livestock. The article, charts and photos are quite interesting. 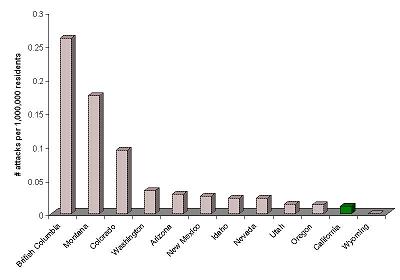 Average annual number of mountain lion attacks on humans per one million residents in the western U.S. and British Columbia, 1972-2005 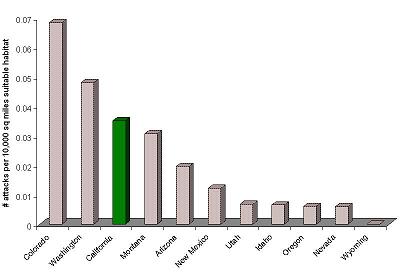 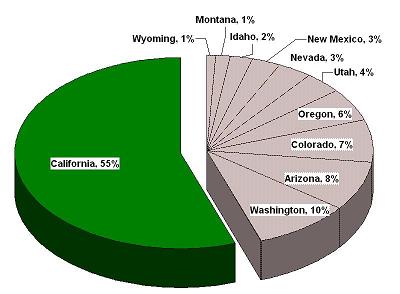 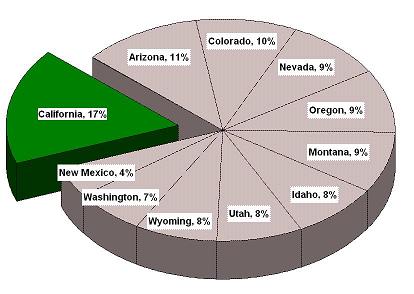 34
When back country camping, how do you avoid being attacked by a mountain lion in your sleep?

4
What are some of the winter hiking trails rated difficult in Colorado's Rocky Mountain National Park that don't require technical climbing?
14
Is there statistical backing for asserting the wilderness is safer than the highway?
9
Are there any areas in Southeast Asia where it would be safe to wild-camp with a tent in the mountains?
27
Are there any situations while backpacking that would require a watch?
8
Is there any evidence that attaching a biner to both seat and leg loops results in a 3-way load?
3
What animals have paw prints similar to a mountain lion such that the absence or presence of claw marks are the most reliable distinguishing feature?
3
How to estimate the size and or gender of a mountain lion from its tracks?
9
Are there any animal behaviors that can be used to predict weather conditions within a 24 hr time period?
1
Is there any evidence that black bears (or other large predators) are indifferent to, or acutally repulsed by, the scent of humans?
26
Are there any natural materials found in the wild that can be used as an effective sunscreen?