I currently live about 25 miles northeast of Cincinnati, Ohio, USA. On February 20-21, 2015, a fairly significant snow and ice event struck the area. On February 29-March 1, 2016, a smaller event occurred also bringing a thin coating of ice. From February 20-24, 2017, it is sunny and approximately 60°F (16°C) or higher. I mention this just to illustrate how unusual the weather has been at this time of year, during 2017.

My workplace overlooks a pond. In past summers, I have gone so far as to break out binoculars and a guide book, and identified that we have at least one map turtle, five painted turtles, and maybe a red-eared slider.

Today (Feb 24, 2017) I went outside for a break and saw the map turtle and two of the painteds on one of the logs on the edge of the pond.

Considering that the long-term forecast does not preclude a return to more normal conditions (there is a blizzard not 200 miles away right now), is there any chance that this early emergence from their hibernacula could ultimately be harmful to these guys? Or could they just as easily return to the pond bottom and resume a state of brumation for another month or two?

UPDATE 6 MARCH 2017 - Early last week there was some heavy rain that swelled the pond and turned it murky. Still, I may have seen one partially-submerged-turtle-shaped object drifting around. Then a few days later, it froze overnight and snowed until noon the next day. Now it has returned to the unseasonable warmth. A bit of a roller coaster from both human and reptile point of view. Anyway, today I saw two painteds on a log. Keeping an optimistic spirit here, until next update.

UPDATE 21 MARCH 2107 - We remain on the temperature roller coaster, though it seems to be starting to stabilize. Anyway, ever since the snow events a couple weeks ago, I have seen no more than two painteds at any one time, and so far no other species. Still too early to jump to conclusions, though. At the least, the fact that there are two definite survivors is good reason for optimism.

UPDATE 27 MARCH 2017 (FINAL) - Great news everyone! I just went out for a look during lunch, and saw a total of five turtles around the pond. One was the map, three were painteds, and one was either another painted or a slider. With the weather stabilizing toward definite spring conditions, it looks like our carapaced friends are in the clear. Yippee!

An early thaw can definitely be dangerous to some of the many varieties of painted turtles.

However, according to the Ohio Division of Wildlife, you only have one breed of painted, which is the Midland Painted Turtle, Chrysemys picta marginata.

Midland painted turtles are among the most abundant and most conspicuous turtles in Ohio. They are particularly fond of basking and can be seen by the dozens on logs and along the banks of most bodies of water through the summer.

This turtle is generally up and out in February, so that's very common!

From Ohio's 12 species of turtles:

While hibernating, the body temperature of the Midland painted turtle averages 6 °C (43 °F). Periods of warm weather bring the turtle out of hibernation, and even in the north, individuals have been seen basking in February.

EDIT: On February 27, 2017, I spoke with a very kind woman at the Ohio Division of Wildlife. I told her where you live and which turtles you've seen. She said all your turtles have adapted to these changes in weather, and can go back into whatever state of hibernation is necessary to protect themselves. A full hibernation isn't always necessary, especially if it's just for a few weeks or so. Some Map turtles tend to end their hibernation earlier than the other breeds anyway. Unfortunately, there are rare times when, if the turtles haven't sensed the weather getting colder, and are spending a lot of time out in the sun, a surprise freeze will cause them to pass away before they can get back under water. She said it's very rare, and happens quickly, so hopefully they don't suffer.

Those who are deceased can be seen at the water's edge, so it's up to you if you want to look around the pond area. I wouldn't, but I'm very sensitive about seeing injured or deceased animals! 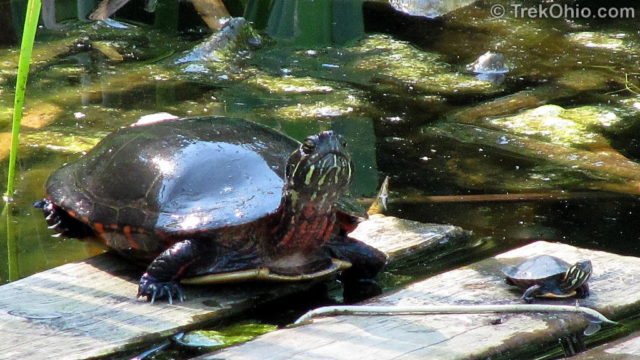 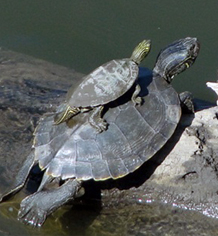 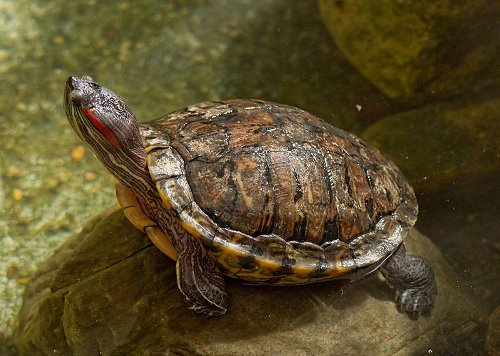 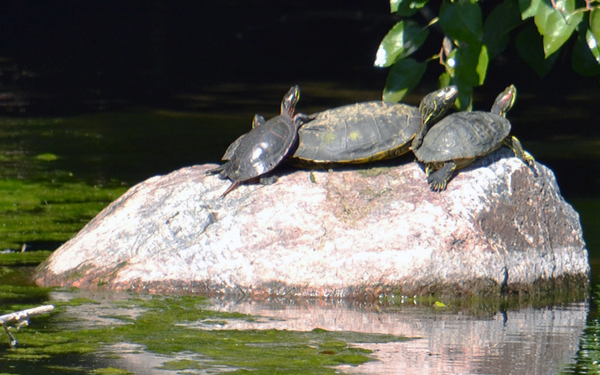 UPDATE APRIL 2019: Thanks for all of your updates from the months after posting the question in February of 2017. It looks like things went really well! That's great news! I hope you've had good strong populations in 2018, and are going through a productive year right now!

It looks like it can be harmful for the turtles.

Even the healthiest turtle may come out of hibernation too soon and be caught above ground by a spring snowstorm and perish. Many wild box turtles are eaten by foraging animals as they sleep, or freeze to death because they didn’t find satisfactory winter dens.

Owner Joy Bloor said: "To hibernate properly they need to be under 6C. Above that and they start waking up and start using energy.

"It's energy they can't spare because they don't have the body weight, so we have to keep them warm with the lamps.

"They can't go back to sleep because they would die. If they are not warm enough they will not eat or drink.

"So they are up and about now for the year. It's definitely the earliest they've ever been awake.

"It's the weather. Most of them were still awake in mid-December because it was so mild and now they are out of hibernation already.

Not the answer you're looking for? Browse other questions tagged animal-behaviour weather animals turtles or ask your own question.

9
What is the Chincoteague Pony Swim on Assateague Island in Virginia and Maryland?
9
How much rain (realistically) could a packaway rain jacket take?
12
What breed is this very large, black, turtle/tortoise found in the Northeast United States?
11
Which types of animals would peel bark off this tree?
28
What animal could strip all the bark off the lower 7 feet of this tree?
9
Foxes in the living room - what causes this behavior?
10
What is this squirrel doing and why?
11
Why should lights be turned off on beaches where turtles breed?
3
What animal could entirely strip the bark of a birch like this?