Where exactly is this rocky shoreline in the Downeast region of Maine, USA?

During the second week of October, 2016, my husband and I went for a drive from our home in Massachusetts to the state of Maine. One of the things we wanted to see was the town of Bar Harbor.

Whenever we go anywhere, we try to take the “scenic route” rather than the highways. That affords us the best opportunities for seeing birds, animals, flowers, woods, and anything else found in nature. Sometimes that means we get lost or off-track, but the best part of that is accidentally ending up in places that are absolutely gorgeous. That was the case on this trip.

We had seen signs to Bar Harbor, but rather than go there (which we did the following day), we took some turns and wandered around.

Driving up a hilly but not too narrow road, we spotted a really unusual shoreline, with more different types of rock than I've ever seen in one place. In fact, there were many I don't think I've seen before at all. I think the road was one-way at that section, but I don't remember that for sure.

We parked the car along the side of the road, and literally saw all these different types of rocks and shorelines in my pictures from where we were standing. It was the only stop we made, making it even more fun to see so much. I'm not good at measuring distances, so I don't know how big it was. The water wound in and around the rocks and the shoreline curved in and away. As the shoreline curved away, the rocks became flatter, and some of those had moss on them. I can't walk easily on this type of terrain, so I got onto the flat orange rock and stayed there. My husband always stays within shouting distance in case I start to slip, but he was able to get to where there were some fascinating breaks in the rocks with water running through them. He also got down to the shore. Some of the drop-off was flat, and, as you can see, there was also an area of dangerous sudden drop off the rocky edge into the ocean. We saw an entrance to a steep wooded path to the left behind the trees, but we didn't walk it.

Since we weren't really paying attention to the signs, as we often don't, I'm not sure exactly where we were. It was probably in the area of Acadia National Park. I'm pretty sure we saw Cadillac Mountain nearby, which is in the National Park. We didn't have to stop to pay, and there wasn't a visitor center, so it didn't seem like an "official" Park entrance.

I've posted a sampling of the many pictures we took. It's the only stop we made along that road, so it was a treat to see so many fascinating things in one place. Some of the pictures are close-up and cropped. We have some big panoramic views, but they all have other people in them, so I didn't post them. The trees in the first two pictures were up to the left of the rocks, near the road. The ocean and trees in the fourth picture were taken facing out from the lower left most part of the rocks.

I'm hoping that because of the unique design of the area, someone will be able to tell me exactly where we were, so we can return. I'm also wondering if there's an actual name for it, so I can learn more about the history and rock formations. 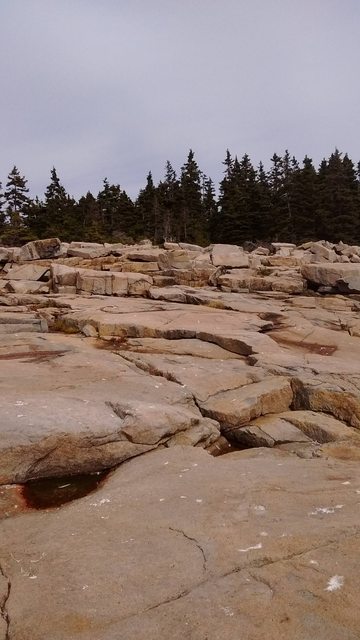 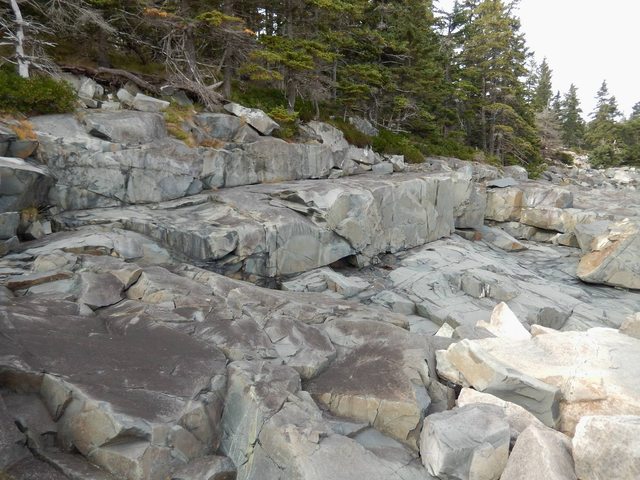 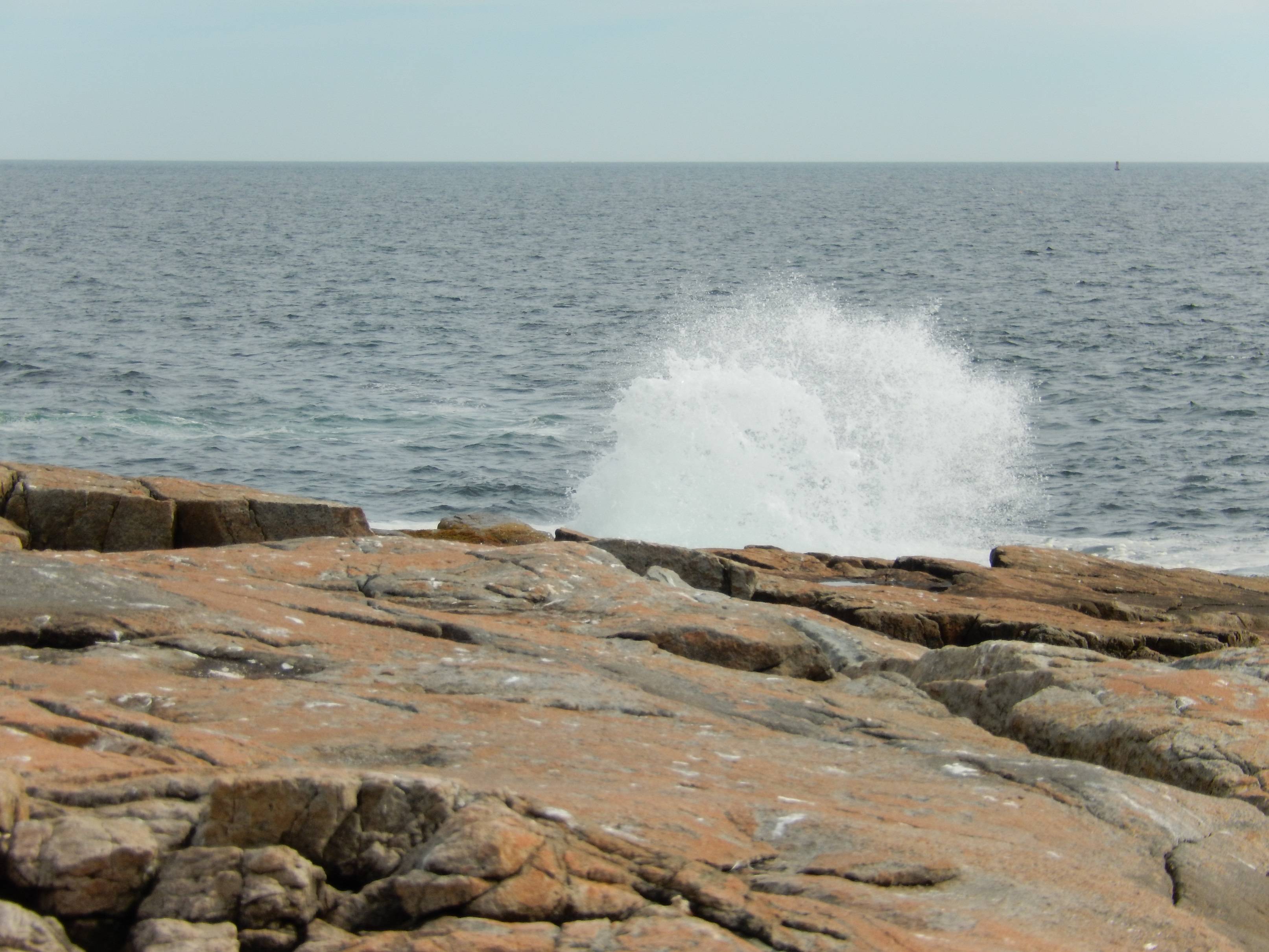 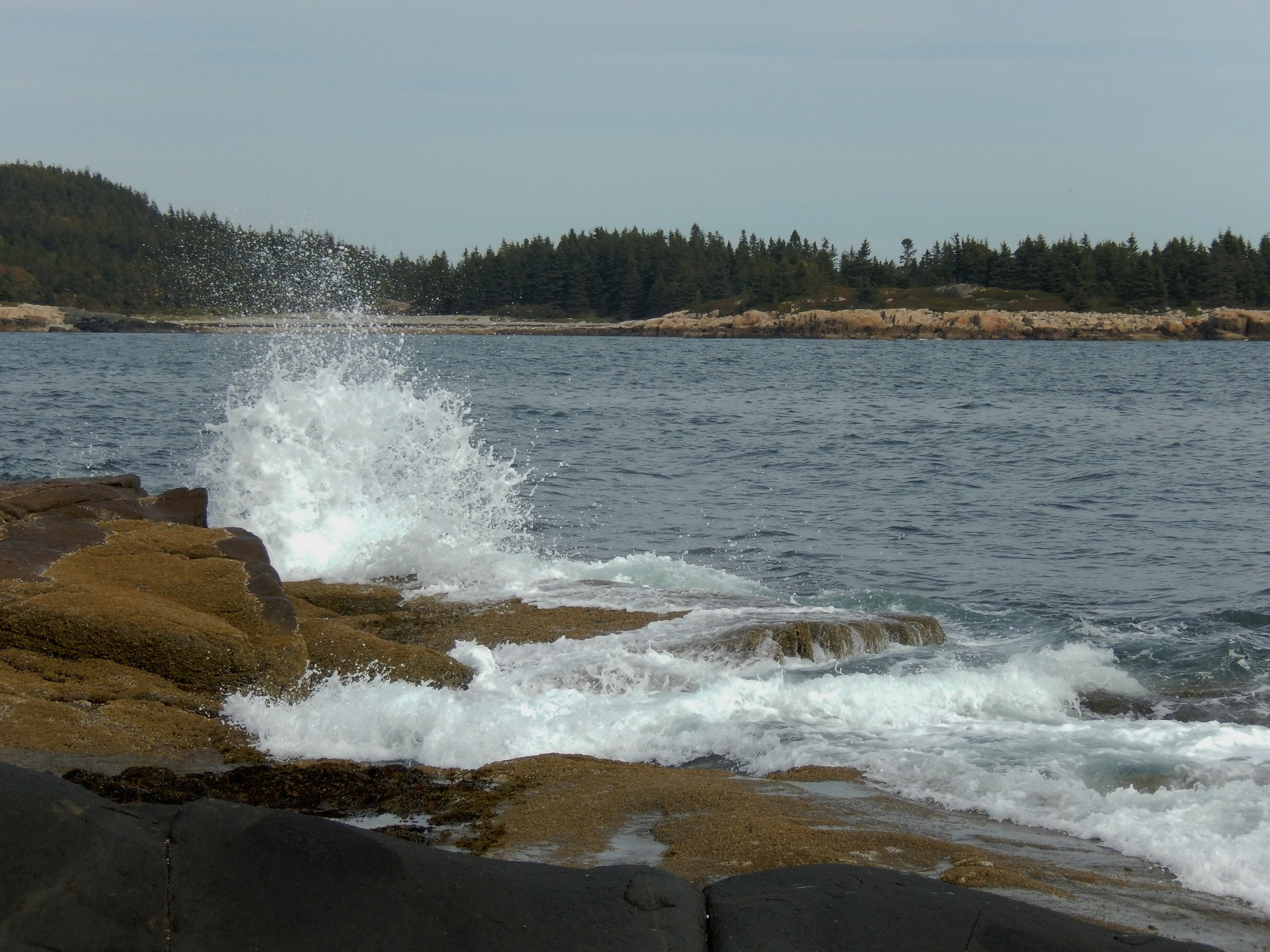 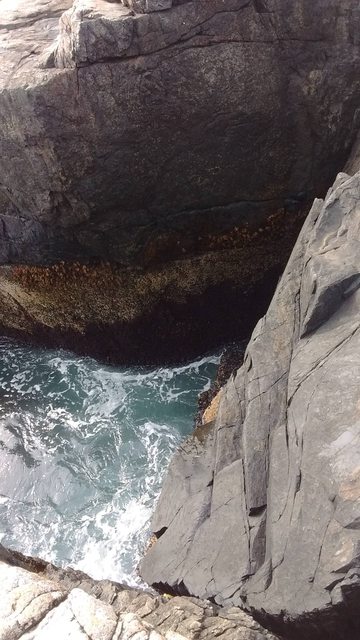 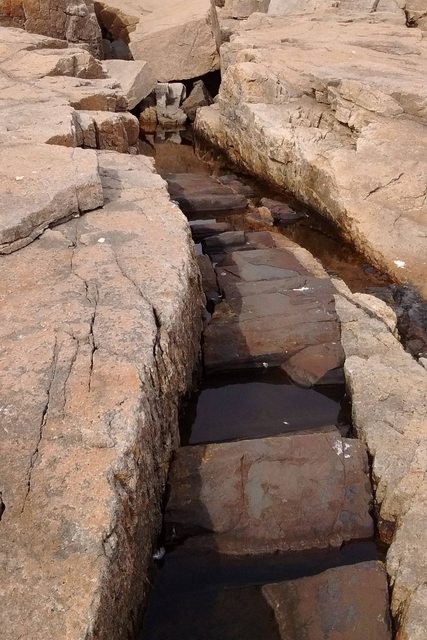 Unfortunately, much of the shoreline of Mt Desert Island looks like that, particularly on the east and south.

Stop and think about what you were doing before and after being there. There is only one way onto the island by car. Did you see this before or after getting to Bar Harbor? How long before or after? Do you remember which way the shore was facing? Could you see anything across the water, or was it open ocean? In what directions from straight out did you see other land across the water? What time of day was it? From that you can find the sun angle, from which you may be able to determine orientation some of the pictures were taken in. Did you just pull over at the side of the road, or was there a parking area just for that purpose? Were there any signs there? Was this at high tide or low tide?

Basically, what I'm trying to point out is that you know a lot more than just what the pictures show, even if maybe you don't realize it. Think about it carefully. There are substantial clues in your head. After narrowing it down, look at maps and Google Earth to see what matches. At the least, you should be able to dismiss large sections of the coast as not matching. Keep narrowing things down.

For example, if you were near Bar Harbor, you should be able to eliminate anyplace on the western half of the island. The pictures also show no buildings obvious along the shoreline. That clearly eliminates anyplace at a town, for example.

Keep following the clues. You know a lot more than you're telling us.

4
What is this small, bright yellow, mushroom found in the woods in Massachusetts?
21
What's the difference between a fjord and a fjard?
9
What is the Chincoteague Pony Swim on Assateague Island in Virginia and Maryland?
12
What are these round, spiny, puffy, green things from the ocean in Northeast United States?
12
What breed is this very large, black, turtle/tortoise found in the Northeast United States?
10
What is this really tall grass-like plant?
11
Why does North Cascades National Park get so few visitors?
8
Where are some accessible flat areas for handicapped birders in Acadia National Park in Maine, USA?
5
What is this plastic net with a wide middle and bottom that looks like an upside-down flower hanging from a tree?
1
Fall/autumn colours in northwest North American mountains