Do American mourning doves only make their plaintive cooing sound where people can't see them?

We have American mourning doves in abundance in Massachusetts. They spend months in our yard, eating seeds both on the ground and in the feeders. They also peck around in my flower garden, so I think they might be eating grubs and insects. We see many of them every day, rain or shine.

I love their plaintive cooing sound. It's hauntingly beautiful. I used to think it was an owl call but know better now.

What's interesting is that the call sounds like it's coming from a distance away. It doesn't sound close enough to be at my feeders. I've never seen a bird using their mouth in such a way as to think I was watching them speak. Even when they're in the tree branch above the feeders, as in my second picture, they look and seem silent. I know it's not because they're nocturnal, as I hear it all day, though sometimes louder towards dusk. I don't think I'm just missing it, as I frequently sit outside with them for hours.

There's a whooshing sound when they rise from the ground, but that comes from the flapping of their wings, and stops when they land.

Do these American mourning doves ever make that lovely cooing sound on the ground, feeder, or anyplace where people can see them? If not, why not?

The first picture is of their favorite feeder, which is on a pole about six feet in the air. Frequently at least four share that eating space, with one or two sitting on top waiting for their turn. The second picture is on a branch beside a rope that leads to a feeder a few feet down. The third is on the roof of my sunroom, where they sip water as it runs down in rivulets after a rain. 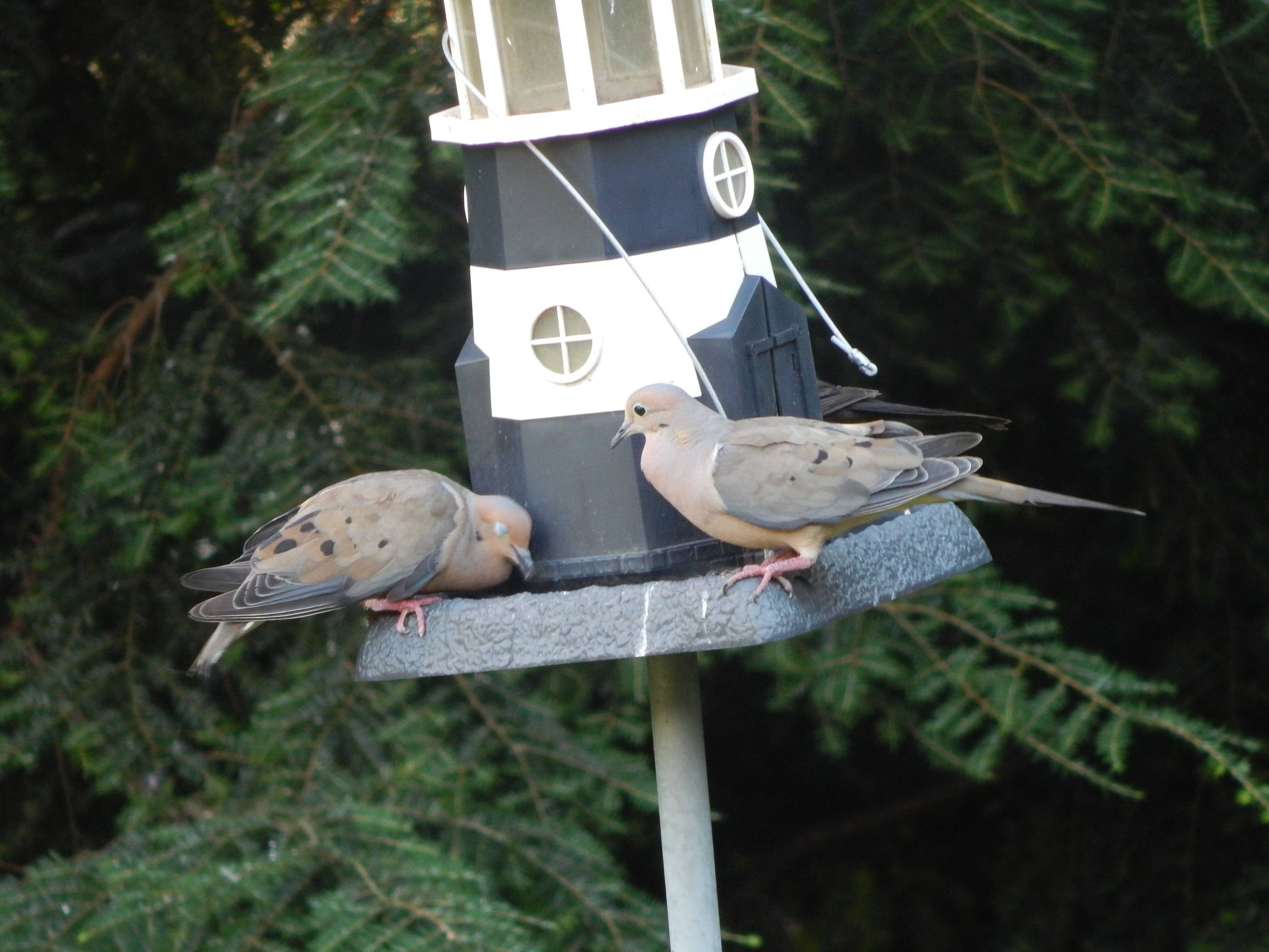 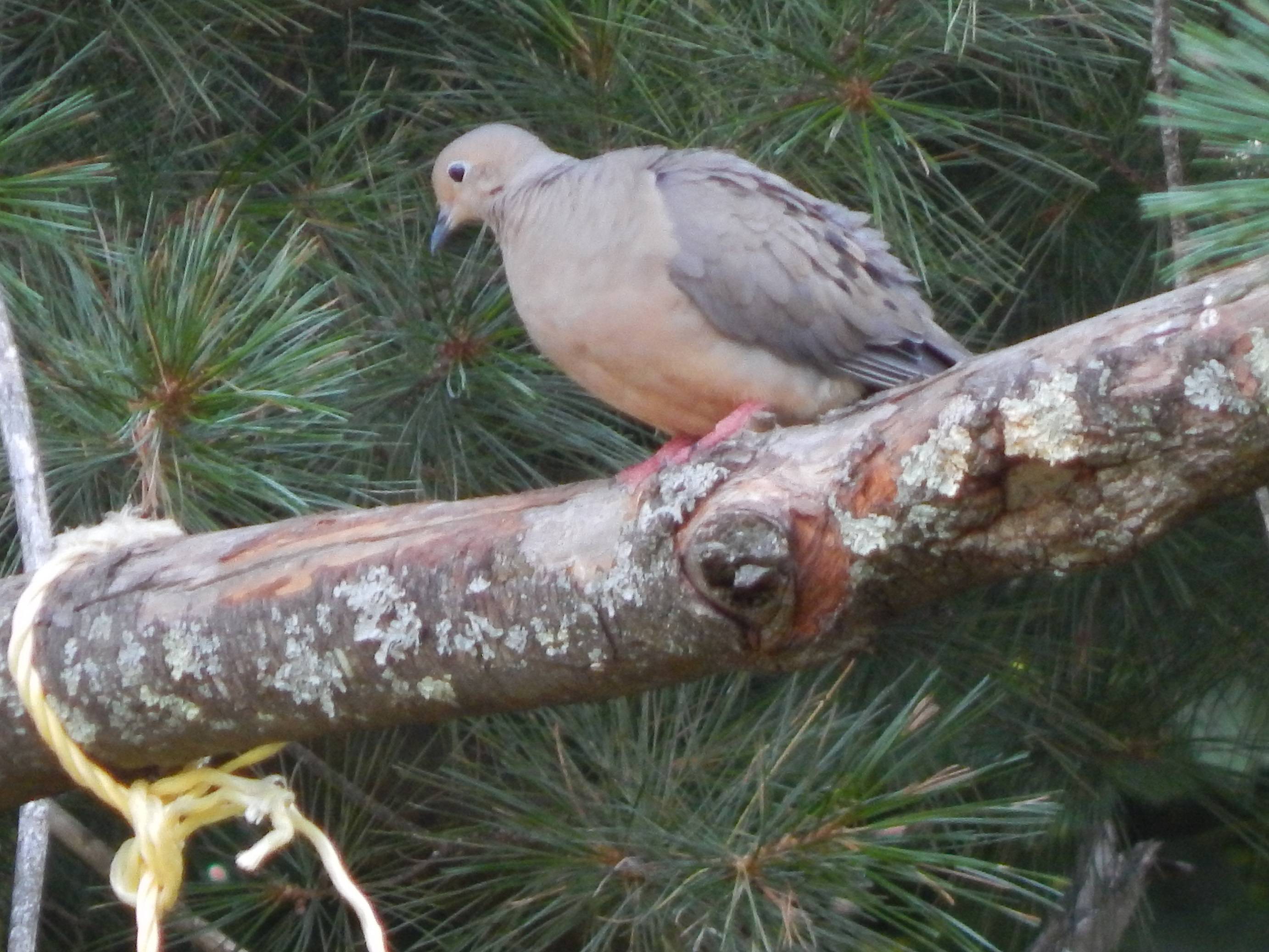 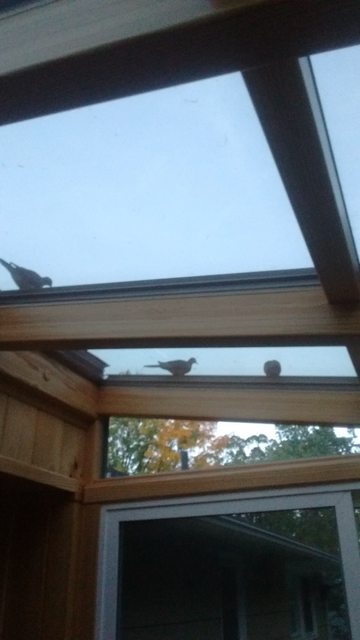 That vocalization is called a perch call, or perch coo. It's only made by a male mourning dove, and the only time he uses it is when he's looking for a mate. As @cr0 and @That Idiot have seen, the dove will make that plaintive sound where you can see him, although it's not that common. Even if he's visible, you usually don't know he's the one calling out. His mouth opens just a tiny bit and very quickly. The lungs fill and puff up, and the chest pumps out the rest of the sound. The bird waits between 10 and 15 seconds and does it again.

Mourning doves are monogamous and form strong pair bonds that persist during at least one nesting season. The breeding season is among the longest of all North American birds, with peak nesting activity occurring in late spring/early summer. At the beginning of the breeding season, unpaired males devote considerable time to perch cooing and performing displays such as flapping/gliding flight to attract females. The perch coo is one of the few vocalizations mourning doves (Zenaida macroura) make. It consists of one note followed by a higher one, then three to five notes held at great lengths, and it used by males to court females.
Source.

The dove generally perches in a conspicuous place about five feet up or higher, where he can be easily seen by female doves. The most common spots are tree branches and power lines. If a male finds a perch he likes, he'll return there throughout the season and defend it from other males. From that position, the sound carries a far distance through the open air. There are times when they'll perch lower to the ground, and call out from there. These perches include fence posts and other man-made structures, usually not lower than a few feet off the ground. According to my research, they don't use feeders or the ground for this behavior. Other mating behaviors take place in these areas, but not the perch call.

For further information about the birds, including recordings of this and the few other sounds they make, I recommend All About Birds, and Audubon Field Guide.

6
How can I identify Woolly Adelgid on a Hemlock tree?

8
How should I position my hummingbird feeders to attract the most birds?
9
How far does a nursing Eastern Gray squirrel travel from her nest?
21
Do bees at the hummingbird feeders keep the birds away?
7
How should I choose a submersible bird bath heater which is reliable and effective?
8
Why are common grackles standing on our bird feeders with their heads pointed straight up?
7
Do backyard birds prefer birdbaths with moving water?
3
Do doves go through a molting time of shedding and replacing their feathers?
4
Did a bear knock all my bird feeders down?
6
Why aren’t birds using these feeders?
9
Can dirty bird feeders make birds sick?