How can I identify Woolly Adelgid on a Hemlock tree?

Note: An update has been added to this post, and is found below the first set of pictures.

I live in Central Massachusetts, in the town of Holden. We're on the border of the large city of Worcester.

In a previous question, one of my photographs caught the eye of a user here in Massachusetts who is monitoring the Hemlock Woolly Adelgid, an aphid-like tree killer.

This insect is decimating forests and home landscapes all over the country. The New England Area is so badly infested that hemlocks are under quarantine in both Maine and New Hampshire.

It seems the most significant research in New England has been taking place at Harvard Forest, the 3500 acre forest owned by Harvard University. It's located in Petersham, a town about 70 miles west of Boston. Senior Ecologist David Orwig has spent decades studying and educating about what has been called the "woolly bully" at the forest and other regions. His research is getting widespread attention. In April of 2015, The National Geographic published an article entitled Are Harvard's Dying Hemlocks a Warning for Trees Everywhere?

The hemlocks here teem with a pest that’s slowly killing them; their demise is all but inevitable. “I’m hoping some will survive,” said Orwig, the forest’s senior ecologist, “but we’re on borrowed time.”

Because this is such an important issue, I'm concerned not only about my own tree, but also about how to identify the Hemlock Woolly Adelgid while out walking, in order to report it to the proper authorities. I'm hoping other people here can be encouraged to do the same.

First, Is my tree infected?
An excellent publication detailing the life-stages, with pictures, can be found here. My tree doesn't seem to have the large growths that are the hallmark of the mature adelgid, but I do have a lot of leaves with a white dusty coloring, which can be a sign of a young infestation. I did find a woolly-looking thing with pinchers attached to a twig, and a few areas of white netting. There are a few round solid lumps, which I thought might be bird droppings, but the experts would know better about that.

All the pictures below were taken in the first week of March, 2017, except the one with the doves, which is from July of 2016. To save space, I've made all of them smaller. Please click on them to see larger, more close-up versions. Some are blurry, but I have others I'd be glad to post instead if need be. Don't hesitate to ask.

The pictures are as follows:
First row left: The woolly thing, which dried up after I removed it. First row right: The same thing attached to the branch. Second row left: View of a branch with leaves with white dusty covering; an area of white netting joining some leaves; and a small round mass at the bottom. Second row right: Another look at discolored leaves. Third row left: A view of a branch from behind to show the twigs. Third row right: The picture of a branch taken in July of 2016. Fourth row left: A view of the same branch taken on March 2, 2017. Fourth row right: The base of the trunk, which I didn't realize was damaged until last week, when I went out to take these pictures! 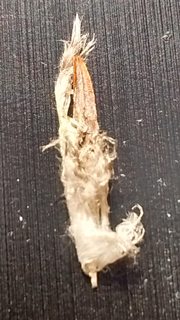 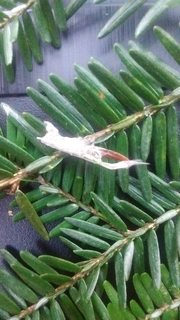 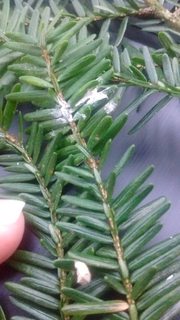 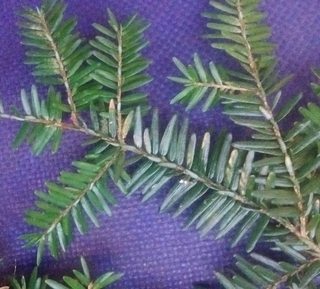 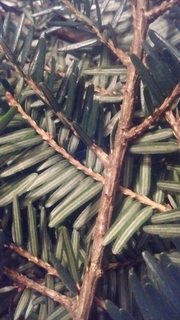 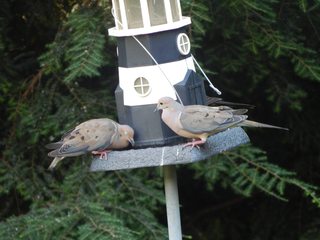 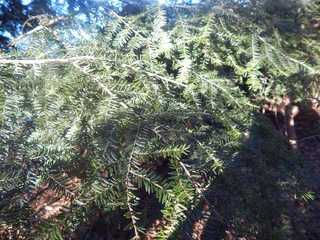 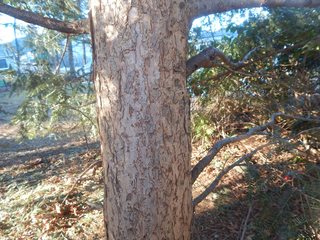 Update: Shortly after posting this I had the tree examined by a naturalist/ecological arborist who's been studying the adelgid for years and treating trees all over Massachusetts. He said it was very healthy, with good new growth and no evidence of adelgid. He was intrigued by the picture I had posted of the suspected infestation. As part of his research, he's been finding that something had happened, most likely a weather pattern, to cause the adelgids to die off without human intervention. Many previously-infested trees have made remarkable recoveries, most likely including mine. This correlates with information provided by Olin Lathrop's answer below.

He examined all of my trees and plants, and did find some Wooly Adelgid on a hemlock in a completely different area of my yard.

He explained that Wooly Adelgid is identified by the appearance of white, cotton-like masses at the junctions of the twigs and the needles. The wooly substance is a coating covering an adelgid with eggs.

He said my infestation was in a young stage, and didn't cover a large enough section of my tree to be doing major damage. He recommended removing the affected branches, which we did, and keeping an eye on the rest of the tree as we come into the spring and summer. If we see a lot more, and want to treat them, his approach to control begins with spraying the affected area with horticultural oils. The spray coats the adelgids and suffocates them, while not harming the rest of the tree or other plant or animal life. This is the least invasive treatment, and should always be the first choice when possible, especially for a homeowner with only a few trees. If the infestation gets out of control, the next step is to treat the entire tree with an insecticide. Imidacloprid has been used successfully for years, but permethrin seems to have some better qualities, and is becoming more popular. All trees are part of the delicate balance of the outdoor eco-system, and removing them shouldn't be the first course of action.

He agreed that the vicious adelgid is doing tremendous harm wherever it's found. The number of infested trees makes control very difficult, and sadly, especially in forest areas, the adelgids are still winning the war.

I appreciate and give full credit to Olin Lathrop for spotting the problem on the original tree, which precipitated this question. Without his keen eye, and generous help, I would never have had it examined. Then I wouldn't have known I had trouble lurking in a different tree, and probably would have lost it.

Below are pictures of our actual adelgids, taken in March of 2017. They're similar to Olin's, further confirming the correctness of his answer. 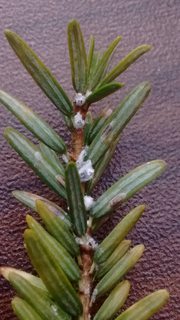 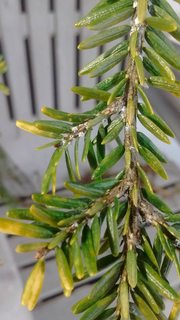 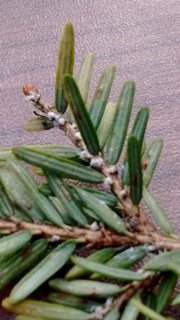 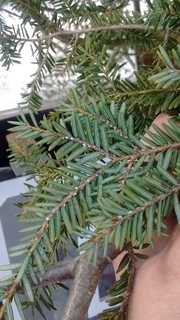 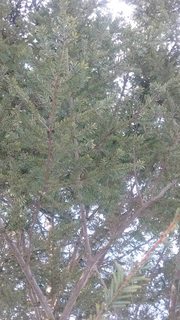 As far as I can see, only your original picture from 2016 shows sign of woolly adelgid. The tree is not in focus since the point of the picture was the doves, but here are some clues: 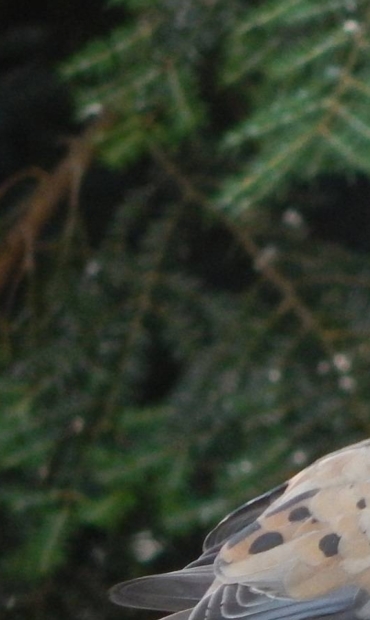 The white dots look characteristic of a woolly adelgid infestation, and a rather severe one if the dots can be seen from the top of the branches. Another clue is the defoliation: 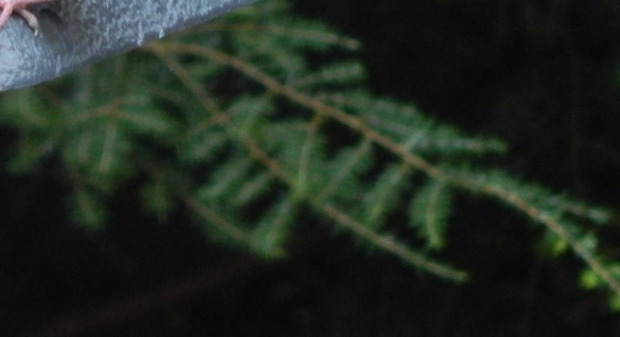 Notice how needles are clearly missing in several places, particularly on the branch at lower middle of this snippet.

Here is a typical look of a mature woolly adelgid infestation. It is most obvious on the underside of branches. Often you will find pieces of branches on the ground, such as this one. This picture was taken in Groton MA on 30 Apr 2016: 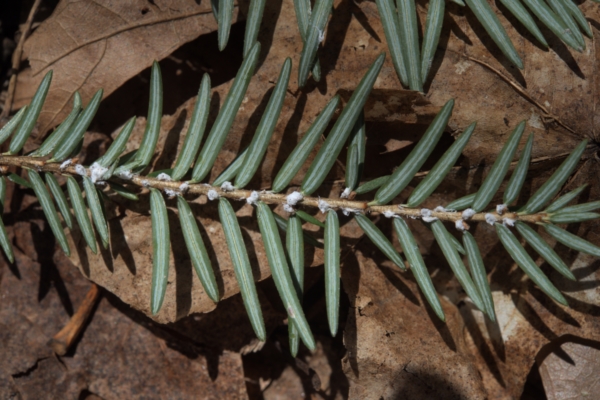 Often this can only be seen when looking at the undersides of branches. Severe infestations can be seen from the tops of the branches, as this one in Beverley MA on 7 Jul 2016: 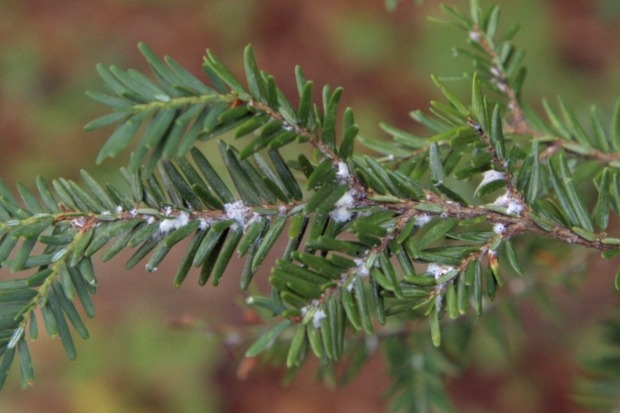 What made me originally ask about the time and location of your picture (you've told us time, but I'd still like to know location) was that I observed something unexpected happen during the summer of 2016.

There were several infestations in Groton that were quite evident in the fall of 2014. That winter, one night got down to about -15°F, which seems to have killed off most woolly adelgid in the area. There was very little to be found in the spring of 2015, and thru most of that year. The next winter only got to -5°F, which is apparently not low enough to kill off the pest. Things started off in the spring of 2016 about where they left off in the fall of 2015, with some severe infestations by July 2016.

I didn't monitor the woolly adelgid again until fall, when I tried to find a good candidate location for testing a bio-control. To my suprise, most of the places I checked showed no current signs of adelgid, and even some recovery of the trees. Most trees seemed to have healthy needles at branch tips, even though further back the needles were still lacking that had dropped previously. Here is a good example of the foliage pattern: 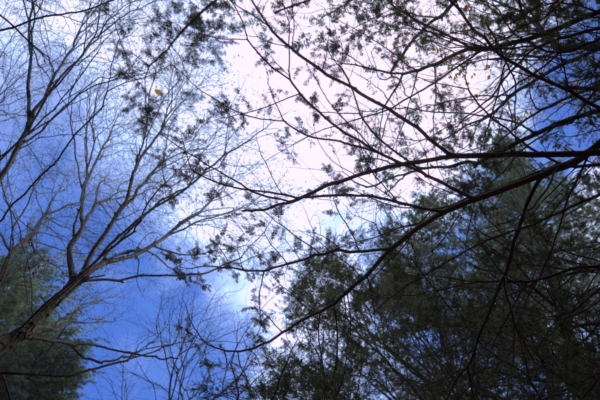 This was in Groton on 6 Nov 2016, and characteristic of many hemlocks in the area. Note the unusual pattern of needles at the tips of branches, with no needles further back towards the trunk. There was no adelgid directly visible in this tree and most others, although it could still be found here and there in this stand.

Something interesting happened in the summer of 2016, which I'd like to understand. We had a unusually dry summer, with drought conditions in much of Massachusetts. Most of the hemlocks grow in wet areas, that at least stayed damp. I don't think the drought affected the hemlocks directly, but may have contributed to the adelgid decline.

It seems this should be studied. It would be useful to understand what did in the adelgid during the summer of of 2016. Perhaps this could give a clue towards a new control technique.

I've been trying to connect up with people doing research in this area, with only limited success. If anyone out there is researching this pest, I'm happy to help and be eyes on the ground in the Groton MA area.

Not the answer you're looking for? Browse other questions tagged bugs trees forests bug-identification or ask your own question.

5
Do American mourning doves only make their plaintive cooing sound where people can't see them?

9
What types of trees are in these intertwined groups in Massachusetts?
12
What are these bulges? Are they harming the tree?
14
How to assess the likelihood of a tree falling in a forest?
6
Is this a dragonfly or a damselfly?
7
What kind of animal may have done this?
3
What is growing in these cocoon-looking structures found on a mountain in Massachusetts, USA?
9
What is this black and yellow-striped caterpillar with four toothbrush-looking tufts of hair along the top?
1
How can I tell the difference between a Tentworm caterpillar and a Fall Webworm caterpillar by observing the web?
2
What woods have been used to build primitive shelters in northern climates, especially around the Adirondacks Mountains?