What should I replace guylines with?

I need to replace some guylines on one of my tents. I normally use some paracord lying around but they have been getting tripped over more and more.

I found some glow in the dark paracord, but before I buy this stuff I wanted to know, has anyone used it? How well does it work? Is there something else I am better off using to prevent kids from tripping over it?

One of my tents has fluorescent paracord - it doesn't glow in the dark, but is incredibly bright and can easily be seen. We also attach some of it as guidelines when pitched in wilder areas to help the kids find their way to the tents in the dark. It works well - typically the only people who trip over them are adults...if they have had one two many glasses of wine...

Glow in the dark sounds like a good idea though - if it is at a reasonable price I would suggest getting it anyway and trying it.

I recommend highly reflective line. Many manufacturers make this. I have had excellent results with Kelty Triptease. One 50' line cuts down to easily make 4 guylines for a tent. It is highly reflective and even a little light will make it really stand out at night.

You may also consider reflective markers like those made by MSR. These will also make the cord stand out more in the day just by making it blend less with the background.

Fluorescent or glow in the dark paracord would be the way to go - I haven't tried the latter, but from looking at its colour it may blend in more in the daytime than fluorescent stuff, even if it stands out more at night. I'm happy to be proved wrong of course!

However, it seems here the question alludes to kids tripping over the lines, which isn't necessarily a problem that should just be solved by making the lines more visible (though of course it's a good step and certainly helps.) I'd also suggest the following two points:

I propose using whatever cord is strong enough, inexpensive, and compact, then marking it with fluorescent surveyor's tape. 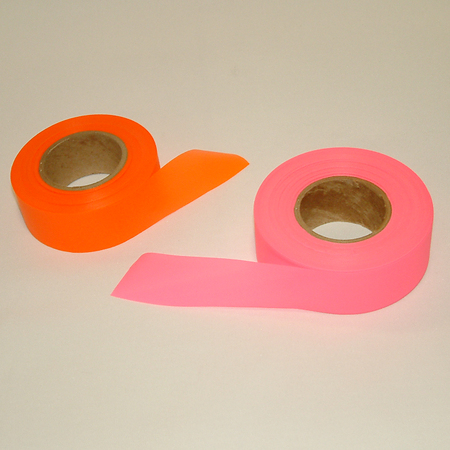 Another option is adding your own glow paint as needed.

I had a similar issue: I was tripping over a fire ring that was present at one campsite we used last year.

I left one of our flashlights on, shining inside the fire ring until we packed up the next day. I fiddled with the flashlight setting and orientation until I had it mildly illuminating the ring enough to be obviously visible but not enough to be obnoxious.

You could do something similar, leaving the flashlight at one end of the line or the other, or perhaps hanging from the middle of the line pointing down. Even if the line itself is not visible, as with the hanging light pointing down, make sure everyone knows what the purpose of the light is so they avoid it. Also remember that if you put the light at the far end of the line and face it toward the tent that may cause problems for the tent occupants.

One of our hammocks has a line around its rim which is laced with dim lights and it has a battery pack at one end. Its purpose is for helping see the location and orientation of the hammock at night. If you can get a similar line, maybe you can use it as a guy line. Ours might not be able to bear any significant load, but you might be able to find some that can.

Not the answer you're looking for? Browse other questions tagged camping tents paracord or ask your own question.

17
What should I look for if I want to buy a winter-proofed tent?
54
How to deal with condensation in a tent?
11
How often should I waterproof a tent?
10
Large Tents and Traditional Campsites
23
Reacting to tornado warnings while camping with no buildings nearby
25
Why shouldn't I buy an ultra light tent?
13
What are practical uses of paracord survival bracelets?
5
How to safely heat a enclosed tent with electricity
12
Is "survival" paracord with fire starter strand dangerous