Are there sound-based alternatives to whistle signals for group communication?

Whistles can be used to signal to group members, however the downside is that other people may think you are having an emergency.

Are there any other devices that would allow you to signal with noise to other members of you team but would not cause other hikers to assume that you are in trouble?

I'm sure this isn't what you were shooting for but using radios, satellite phones, cell phones, etc. would all count because they transmit the "noise" of your voice to your target where it is reproduced as noise. So in a way it is kind of like teleporting your words/noise exactly where you want it to go or speaking in a targeted echo chamber. :)

The advantages of using something like a radio/phone instead of a whistle are plentiful and pretty obvious. Just to increase the length of my answer I'll name a few:

There are two primary disadvantages to radios/phones.

Drums have been used historically to communicate over long distances in forested areas, so you could send messages simply by knocking on wood. Pick up a couple of hard sticks, and knock them against each other or something else that has some good acoustics. You could communicate with morse code this way, and the average traveler would just assume they're listening to a woodpecker.

If you're looking for something to carry, you could bring a pair of claves along with each group: 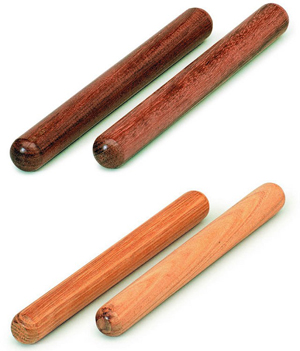 They make a strong sharp sound that will carry quite a ways, and double as a pair of fighting sticks incase you need to go sinawali on something.

I spent a summer with two brothers from the Dominican Republic and they would call out to each other with a loud howl-like "FOOOOOOOOOOOO" sound that carried very well through fields, forests, and over a lake.

Later in life I spent some time with a friend of a friend who was essentially squatting and setting up a semi-permanent settlement in the jungle. Him and his gang of goons used the same sound, a howl-like "FOOOOOO" to signal their presence to each other in a remote Latin American 'city' on a hillside, and they said they used it in the jungle too. I was surprised to actually hear this and see it work for them to regroup from different parts of the city - it really carries well!

The folks from the latter story told me it's the sound that humans can make the loudest for the longest amount of time (key thing there is it's not only loud and carries well, it can also be drawn out for a long period). When you get the chance, try it out, and notice how long you can make it with relative ease (it doesn't take your breath away as other similarly-loud calls might).

I put it to practice and found it works. Myself and two others were relying on radios during work in the woods once and our team didn't meet as expected. The "FOOO" sound actually worked better than a pea-less whistle and the non-functional (due to terrain) radio I had, according to my team which heard me and eventually got back together.

As for getting in trouble, generally the signal for emergency is three repeated calls. So, don't do that. If you just call once or twice and wait a reasonably long time before calling again, people who are listening are more likely to say "Oh, they're OK or they'd be SOS'ing or calling out more chaotically in a panic." The FOO sound specifically carries very well but doesn't have the sense of urgency that a high-pitched scream or whistle does, at least in my experience.

One alternative is to use animal calls. For instance, on a clear night an elk bugle call can be heard up to a mile away. There are also duck calls or push-to-call cow elk calls.

These should not replace a whistle as an emergency signaling device, but as a way to hear where your team members are or signal back and forth without shouting they do work.

One of the downsides of this is that in some places the use of animal calls is illegal, for instance in national parks in the United States. The other is that you may attract animals (this is what the calls are designed for), including predators and extra care should be taken during hunting seasons.

Not the answer you're looking for? Browse other questions tagged safety communication whistles or ask your own question.

11
Are there standard whistle signals for communicating with separated party members?

18
What should a rescue team be equipped with?
15
Is it safe to sleep for more than 16 hrs a day at altitudes above 6000m?
14
What to do if a team member falls sick?
16
Snake on chest while sleeping?
8
Are there standardized signals to communicate with aircraft?
6
What features should I look for in a satellite emergency device?
12
What could possibly go wrong in Sarek?
11
Are there standard whistle signals for communicating with separated party members?
6
The dangers of simul-rappelling
6
Under optimal conditions, how far could an emergency whistle be heard?