Which bird species migrate between Europe and the Americas?

I know there are some species which migrate over vast distances, such as the Bar-tailed godwit (Limosa lapponica), which flies through Alaska and Africa, or the Arctic tern (Sterna paradisaea), which flies seemingly everywhere,* but I don't know what sources to consult for other species as I am a novice birder.

I'm especially interested in knowing about bird species which pass through the UK and also Southern USA.

* NYT: Birds that migrate thousands of miles with nary a stop

There is a route known as the East Atlantic Flyway used for migration between Eastern Canada, Greenland, Iceland, Siberia, Northern Europe, Western Europe, and on to Africa. 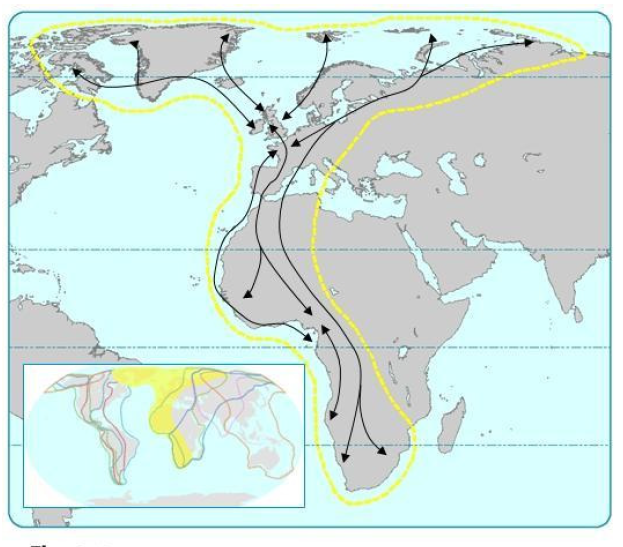 There are 297 species using the flyway and tens of thousands of individuals per year. They are mainly waterfowl and waders, but an interesting exception is the recently discovered route of a population of Northern Wheatears in Eastern Canada - a small songbird that migrates through Europe to winter in North Africa.

There's been a lot of interest in this flyway recently as it provides a vector for Avian Flu to move between European and American populations, with many migration routes overlapping in Iceland, Greenland and Eastern Canada.

I'm not aware of any bird from south of Arctic Canada that makes it over to Europe, apart from the occasional exotic blown over by storms. Most migrations are on a north-south axis, as populations follow food sources across the seasons. There would be little advantage for a bird from lower latitudes in the Americas to make a strenuous migration to a similar latitude and season in Europe.

I don't have a direct answer to your question, but basic logic says that would be unusual.

Think about what seasonal migration is for. It is to get access to different conditions than any one place provides over changing seasons. Some species accomplish this by short migrations between different altitudes. However, long distance migrations are to get different conditions by changing latitude. Therefore, such migrations are predominantly north/south. Europe and North America are east/west of each other. It doesn't make much sense to cross a whole ocean and end up in roughly the same conditions as where you started.

By this logic, if there are any species that migrate as you describe, they probably spend summer in the arctic. Europe and North America are much closer there. For example, summer breading grounds may be far enough east to be considered "Europe", but the bird then flies to Brazil during winter in the northern hemisphere. A reverse scenario might be true between just a little more west in the arctic and winters in the Mediterranean area.

15
Does a bird really abandon the nest? Will similar birds re-use it?
10
Does feeding migratory birds in the fall affect the timing of migration?
7
How and why is the red kite bird disturbed by wind turbines?
15
Why does this blue tit bird desperately want to come inside?
19
What is the ecological justification (if any) for bird feeders?
10
What's the ecological impact of bird-baths?
11
Why was I attacked by a bird (twice)?
7
How should I rescue a baby bird, including when it's wet?
8
Can dirty bird feeders make birds sick?
1
What bird(s) is this in this recording?