Why do some knives have one-sided sharpening?

Although most knives I have seen have their edge symmetrical, others (often serrated ones) have the edge ground out only from one side (the side of the serrations). There are also some straight edge examples, like the PECK. Why is this necessary, does it have significant benefits and is it exclusively linked with serrated knives?

Sorry for not posting pictures, I couldn't google hard enough to find some.

Serrations are formed on one side due to the method of manufacture (a formed grinding wheel). I suppose it would be possible to grind serrations from both sides with very careful alignment but I cannot recall seeing this on any production knives.

Single-side or "chisel grind" blades are not restricted to serrated knives. Nearly all traditional Japanese knives use this design:

To achieve their "unforgettable sharpness," traditional knives are razor sharp on one side and slightly concave on the reverse side. This design creates an overall sharper cutting edge, makes resharpening easier, and allows for more sensitive culinary work.

This design allows for easier hand sharpening (on a water stone) because of the construction. The back of the blade (called the "ura") is actually hollow, flattened at the perimeter, as seen on this chisel. (On knives the flattened area is much smaller and harder to see.) The front uses a very wide bevel. Each surface is placed flat on the stone to sharpen and acts as a natural guide, though much skill is still required. Here is an exaggerated-scale cross section: 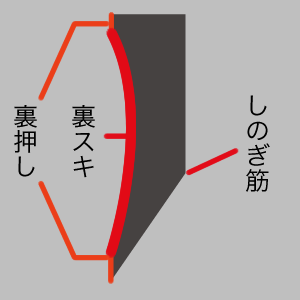 (This one is more proportionate)

It allows for a keener cutting edge on a knife of a given thickness. It also changes the way the knife cuts and the manner in which it is held. The steel used in these knives needs to be very hard to support the low angle edge but they are fragile as a result.

Some manufacturers such as Emerson Knives use a single side grind, but it does not benefit from the method of sharpening that Japanese knives (and chisels) have because it lacks the hollow back and single flat bevel required.

Not the answer you're looking for? Browse other questions tagged knives or ask your own question.

3
Is there an actual advantage of switchblade folding knives over any other method of opening a folding blade with one hand?