Why are common grackles standing on our bird feeders with their heads pointed straight up?

I live in Northeastern United States, where it's spring at the moment. We keep bird-feeders throughout the year, so those that over-winter always have something to eat.

As is usual at this time of year, a massive group of common grackles (Quiscalus quiscula) recently arrived, along with other birds of similar size and color, including starlings and red-winged blackbirds. There were hundreds of them, quite a magnificent sight. Some have already dispersed, especially the red-wings, but a large number will stay until the late fall migration.

Over the last few weeks, we've been witnessing a behavior we don't remember having seen before. At least five grackles perch near each other on top of a grouping of bird feeders or, less often, on the ground. They stop eating and stare straight up into the sky. Some puff up their bodies and flap their wings. They screech at each other, but it doesn't sound like the usual grackle call we're used to hearing.

After a minute or so, some fly off to join the groups scattered in the yard or trees, and the others will continue eating. When they all leave, it's only for a few minutes, and then it happens again. It could be the same group returning or a different group altogether, as we can't strictly identify them. We've seen it a few times over the course of a few hours on a number of different days. At first we thought they were on the lookout for some kind of predator up high in the trees or in the sky. However, because they only see out of the sides of their eyes, if their heads are straight up they can't be watching the sky, or even the tall branches above them, so we've pretty much ruled out that theory.

Does anyone know what this behavior means?

Unfortunately, they're quite skittish, so every time we try to take a picture, they fly off. They very much resemble the picture below. 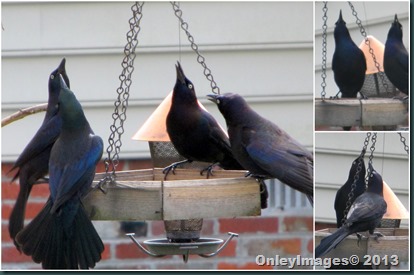 Those grackles are engaged in a courting behavior, most frequently called “bill tilt.” It's also been called “head up” or “head up threat.” While establishing pairs for mating, males vie for the attention of the females. Usually as the birds arrive, a group of males will chase the females. Gradually the males drop off until there are fewer males vying for the attention of each female. Once they settle in at the feeding and nesting areas, the males begin the process of establishing dominance, thus increasing their chance of attracting the specific female who'll become his mate. The males won't do the head tilt unless at least one other male and one female is present. The females may also do the head tilt, but once the pair is established, they both discontinue it. In each group, the male who can tilt his head farthest back and hold it the longest is considered dominant and the other males respect that.

Although the grackles may engage in some physical sparring behavior to establish dominance, much of that is avoided by this behavior.

From page 208 of Stokes Backyard Bird Book: The Complete Guide to Attracting, Identifying and understanding the birds in your back yard.:

Watch the common grackles at your bird feeder. Every once in a while they'll look up as if they were looking at the sky. (They are not really looking at the sky; when birds do that they tilt their head to one side.) This display, called “bill tilt”, is part of their language. It is usually done between two males or two females when they are competing for dominance over a mate or at a feeding site. The display is held for several seconds, and then the birds resume feeding. Bill tilting is especially likely to occur when new birds arrive on the scene.

Groups of grackles foraging in a common feeding area frequently display dominance and aggression behaviors toward each other. One of these behaviors is the “bill-tilt.” Interacting birds tilt their heads upward and point their bills toward the sky. The more dominant the bird, the more upwardly tilted their heads!

The ruffling of feathers is also a courting or nesting behavior.

Males put on a display for females by fanning their wings and tail, ruffling feathers and tilting their bills. Females quiver their wings in response. Source

World-renowned ornithologist, Arthur Cleveland Bent, compiled a large group of studies and visual reports of grackles and their behavior dating back to the late 1800s. The following is a quote from Witmer Stone in 1937, published by Mr. Bent:

As early as March 5, I have seen evidence of mating and sometimes two males have been in pursuit of a single female, resting near her in the tree tops, where they adopted a curious posture with neck stretched up and bill held vertically.

As early as March 13, many of the Grackles are flying in pairs, the male just behind the female and at a slightly lower level. They are noisy, too, about the nest trees and there is a constant chorus of harsh alarm calls, 'chuck, chuck, chuck,' like the sound produced by drawing the side of the tongue away from the teeth, interspersed with an occasional long drawn 'seeek,' these calls being uttered by birds on the wing as well as those that are perching. Then at intervals from a perching male comes the explosive rasping "song" 'chu-seeeek' accompanied by the characteristic lifting of the shoulders, spreading of the wings and tail, and swelling up of the entire plumage.

Interestingly, the specific calls will be used between males and females or males and males while in a group. Much like the head tilt, the male uses it only in the presence of other males. Once he has found a mate, he doesn't use either again, and neither does she.

8
How should I position my hummingbird feeders to attract the most birds?
3
What sort of crane, and what sort of snake?
4
What are these large black and white waterfowl with red around the eyes?
21
Do bees at the hummingbird feeders keep the birds away?
5
Do American mourning doves only make their plaintive cooing sound where people can't see them?
7
Do backyard birds prefer birdbaths with moving water?
7
What is this black and white bird with thin brown legs and a multi-colored beak, found in Massachusetts USA in January?
22
Why do some birds fly in a V-formation?
8
How do songbirds and small animals know when there's a hawk in the immediate vicinity?
6
Why aren’t birds using these feeders?