Camp fire starting for the novice?

We have several posts about fire most of them are about specific challenges.

A recent question had myself and others searching for fire starting basics. We don't seem to have a post about it.

What does the novice need to know to start a camp fire?

This is not a survival question. The novice has sufficient seasoned dry wood, paper or other man made materials to start a fire.

As mentioned in an earlier post, there are three critical components: fuel, oxygen, and heat. Understanding how these interact is critical to successfully creating a fire.

The oxygen is the easy part given that we're surrounded by it. Still, you must keep circulation in mind. The process of combustion consumes oxygen, and if its supply cannot be refreshed, the fire will die.

Heat can come from many sources: a match, lighter, or ember. While the first two are obvious, there are many ways of producing an ember: friction (a hand or bow drill), a compression piston, a magnifying glass, or a chemical reaction.

When a substance such as wood is burned, there are two general stages of combustion:

When most of us think about "fuel" for a fire, we think immediately of wood. Before something as dense as wood can be ignited, we will need something more flammable than wood: tinder. Tinder is usually very light material, and can be natural or man made. Natural tinder may include grasses, cat tails, tree barks, or fungus. Man made tinders include a broad array of "fire starters", many of which are chemical.

When starting the fire (applying heat to tinder), you are actually getting the tinder to give off gasses. These gasses ignite, providing additional energy (heat). Provided enough gas is available and your fuel (wood) can be heated to the requisite temperature, the carbon will eventually begin to burn.

It seems obvious, but a small piece of wood or tinder can be heated to ignition with a small source of heat. Consider that a match would do little to heat a quart of water, but that same match might warm a thimble full of water. Your tinder must be appropriate for your source of heat.

Put your tinder to the inside of your fire lay, making sure you are able to EASILY access it with your ignition source. Surround this by your smallest pieces of fuel (kindling). Your initial layers of kindling might be the size of match sticks, with the next layer the size of pencils. Build outward to larger pieces of fuel.

Let's not forget about oxygen -- if the fuel is stacked too densely, it cannot reach the wood inside the arrangement.

You may wish to control (limit or accelerate) the access of oxygen to your fire. Limiting the flow will reduce the rate of combustion, causing your fire to burn cooler and consume fuel at a lower rate. Increasing the flow of air will consume fuel more quickly and increase heat.

Once the fire is going, there are practical matters to consider as well. Does your fire lay support itself or does it fall apart? As the fuel burns, how is new fuel added? There are dozens of techniques easily found by searching on the web.

In the end, it returns to maintaining the balance between fuel, oxygen, and heat.

Others have focused on materials and structure. This answer just tries to supplement that info by focusing a bit on fire building as a process.

Others have mentioned that your initial source (e.g. a match) needs tiny tinder to ignite. A small fire of burning tinder can ignite larger wood (kindling). A medium-size fire of kindling can ignite logs. That much is pretty understandable, even for someone who has never tried to light a fire.

A common mistake for a novice is to build what looks like a fine structure, with tinder, kindling, and logs, as if it were a finished building - a log cabin of sorts, or a large teepee. That can work, with experience, but it can also fail. And it's not the right way to learn to start a fire (IMHO).

What's important it this: Pay attention to whatever fire you have already, starting with your match. Feed IT, according to its size and its available fuel and oxygen (e.g. wind) - that is, the fuel and oxygen that it has access to in immediate proximity/contact. Fuel and air that is not right next to the fire (e.g. flame) doesn't count.

What this means in practice is that it's not about what your structure looks like. It's about what's happening in the immediate vicinity of the fire itself - the part that's actually burning. That's all that counts.

To make things simple, let's assume that all of your fuel is good, dead, very dry. You've prepared, ahead of lighting, a pile of tinder, a pile of kindling of various sizes (e.g. stick diameters), and a pile of logs of various sizes. You're ready to add fuel to whatever fire you have at any moment.

(If your fuel is not super dead and dry then you will need more heat to catch it on fire, and you will need to build your fire up more slowly.)

Build a small fire structure. One that will accept your match fire, to light tinder, and with a small amount of small kindling ready to be lit from the burning tinder.

Light the tinder and immediately pay attention to the resulting fire. If it burns well, add a bit of tiny kindling.

Do not add fuel that the small fire is not eager to burn. Be ready to add fuel to your fire. But don't add fuel until your fire asks for it. Your fire will tell you when it's hungry for more.

The fastest way to eat a sandwich (including swallowing) is to take small bites and swallow them before taking more. Jamming lots of food in your mouth just clogs things up. Same with fire fuel: feed your fire only as much as it seems to be accepting and catching on fire.

Just keep paying attention to how your fire's burning, and feeding it to make it bigger. A bigger fire can ignite more fuel and bigger chunks of fuel.

How much fuel do you add at any time? Just whatever works - only as much as will actually catch fire. Add one little piece and see if it catches, then repeat. Give the fuel you've already added a chance to burn well, before adding more.

Remember: You're adding fuel only to get more heat, to increase the size of your fire. You're not adding fuel for its own sake. If fuel you add doesn't catch fire then take it off. If it catches slowly, wait till it gets going good before adding more.

Fire needs heat, fuel, and oxygen, and it can only use them in balanced amounts. You start with a very small amount of heat, so you add only a small amount of fuel at first. You add more fuel progressively, as the fire can handle it.

[Successful use of a large, pre-built structure doesn't contradict this. In that case, the large amount of big fuel is not used by the fire initially, and it is kept far enough away from the actual fire (e.g. flame) that it does not prevent access to sufficient oxygen. The disadvantage of this approach, especially for a novice, is that it is hard to adjust your fire as it burns. In effect, with this approach you've planned for a specific burning / fire development. If the fire does not actually burn as the structure would expect, then you have to start taking it apart and re-building it progressively.]

That's the idea, but here's something important in terms of adjusting your fire: wind - specifically, wind that you provide and regulate by blowing on your small fire, to help it grow.

Here's the simple secret to blowing on a fire: Blow from below, not above. To do that, put the side of your head on the ground or very near to it. The lower your mouth is to the ground, the better. (Don't blow into the wind, obviously.)

Purse your lips and blow slowly, steadily, and long. Then turn your head away from the heat and smoke, and inhale. Repeat... Long, steady breaths, not sudden or powerful breaths. The power, for the fire, is in the long, steady supply of fresh air, not in the strength of a quick gust.

You act like a blowtorch, and the result has the effect of a blowtorch. Think blacksmith bellows for a fire that heats iron. No bellows, no wrought iron.

If your fire is very tiny (little heat), blow very gently or not at all. As it gets a little larger (hotter), you can blow more strongly. This is a very effective way to get your fire burning hotter and larger faster.

(Yes, you can also fan a fire with a hat, pot, etc., but the wind you get from this is nowhere near as strong, consistent, and lengthy as an exhalation. Its only advantage is that it seems easier, but it's generally a weak method of supplying oxygen.)

There is really no magic in starting a fire. Even moist wood will ignite if you do it right. First you want to forget about paper or any fluids as they won't do you any good, then you need some patience for proper preparation.

Apart from that, here's a list of natural tinder/kindling (my favorites bolded):

Basically, to start a fire you need to complete the fire triangle, 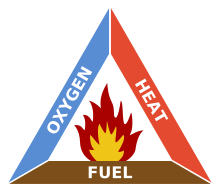 At the very beginning you will need some kind of starter that can create heat, like a lighter or magnifying glass or matches to get the first spark/flame going.

Then you begin with things that have a lower autoignition temperature such as tinder or lighter fluid, and use that to light bigger pieces of wood.

Not the answer you're looking for? Browse other questions tagged fire-starting or ask your own question.

20
What are the most effective ways to start a fire in the cold?
6
Should I add holes to my fire pit/bowl?