What is the risk of starting a forest or wildland fire with a flare gun?

When firing a flare gun in the air, what is the risk of accidentally starting a forest or wildland fire? Does the flare go out completely before it touches the ground?

There is a definitely a risk of starting a fire with a flare gun, for this reason they are discouraged by the National Park Service (at least in Grand Canyon-Parashant National Monument).

Here is a case where a fire was started,

HONOLULU (HawaiiNewsNow) - 29-year-old Kevin Nakagami was arrested by police on suspicion of first-degree arson, after he reportedly told them that he'd fired a flare gun at the Koko Head shooting complex.

The flare had landed in some dry brush and snowballed into a full-scale fire fight and rescue operation on the Koko Head hillside.

Here is a case where firefighters were deliberately using flare guns to start fires.

Garret Blasingame, a Everglades National Park firefighter, uses a flare gun to ignite brush along State Road 29 during a burnout operation to stop a wildfire in the Big Cypress National Preserve. 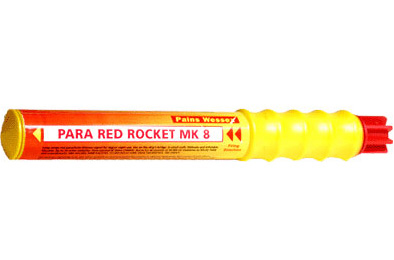 Flares ignite at 191 °C (376 °F) and burn as hot as 1,600 °C (2,900 °F). This makes them incredibly dangerous since they are well above the ignition temperature of most flammables found in a forest or wildland.

My experience firing a parachute flare such as a Pains-Wessex at sea level, the air is thicker and they tend to hit the ground unlit. Further in elevation, say 4400', most of the flares tend to stay in the air for less time and hit the ground lit. The flares are hot enough to start a fire instantly if they hit dry grasses or scrub.

I've fired illumination style parachute flares into the air and set them off on the ground and used them to illuminate an object. The bigger flares burn so hot that the plywood used to block the light a foot way will ignite.

I'd also like to mention it's illegal to fire a Pains-Wessex style parachute flare in a non-emergency situation near a navigable waterway. It will be seen by the Coast Guard as an emergency and they will respond.

Not the answer you're looking for? Browse other questions tagged safety emergencies communication forest-fires or ask your own question.

29
Modern equivalent of a flare gun?
6
Is there a safer way to use a flare in a wooded area?
2
Is a flare a good fire starting tool?

38
How can I be absolutely sure my fire is safely extinguished?
31
Surviving a forest fire by starting another fire
6
Is there a safer way to use a flare in a wooded area?
20
How long after a forest fire can you safely re-enter a forest?
6
Is there a benefit for animals who return to the area of a deadly forest fire after the fire is out?
4
Will the Trailhead Registry burn in a forest fire?
7
What are the immediate causes of the large forest fires that have ravaged the US and Canada over the past several years?
8
Can a gun spontaneously fire?
1
Radius of safety from forest fires