The "Lech Fall" in Austria is a huge waterfall with a small peninsula on its inflow. This picture gives a nice overview: 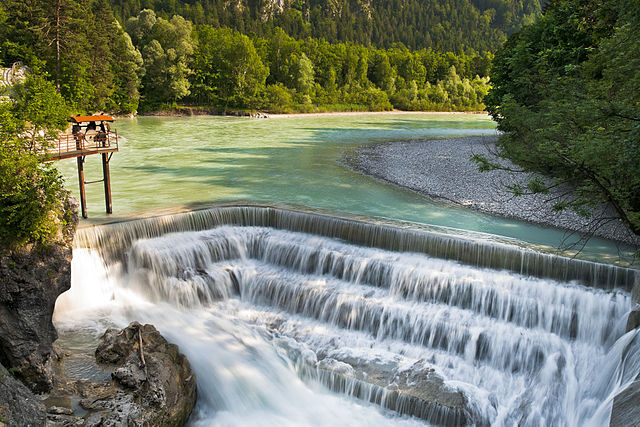 I was standing on that peninsula and experienced extremely strong changes of the water level. It rose that much, that half of the stony land was underwater in seconds! It randomly rose and fell (approximately every 5 minutes).

What causes these strong "tides"?

It looks a lot like there's a power station just downstream (photo), which can be seen on openstreetmap. I suspect that the power plant is being used to respond to peak loads for which hydro is very good. That whole stretch of river has several power stations and the flow through them will be coordinated to some extent. In particular there's a dam upstream of the falls.

TV pickup is a phenomenon where electricity demand spikes in the advertising breaks of popular TV programmes. It may be more of an issue in the UK than in some countries because of of the national obsession with tea-drinking and a significant fraction of the popoulation putting the kettle on at the same time but can account for surges in demand on the timescale you mention. It's also possible tht related to this you happened to be there at the right time for some sort of test/maintenance operation which resulted in opening/closing gates.

I'm slightly surprised that there aren't any warning signs telling people to stay out of the water as levels may change without warning. I've seen those before downstream of power stations.

8
What is the longest stretch of bike trail that parallels a navigable river in the US?
4
How many bike paths parallel the Ohio River?
13
Why do some people stand inside the river fishing?
33
In the US is it legal to travel on any river/creek my canoe will navigate?
11
How do you protect yourself against crocodiles when you have no option but to camp on the banks of a croc-infested river?
6
How long to travel the Mopan River by canoe between San Ignacio and Melchor de Mencos?
3
How long would it take to canoe the entire length of the Belize River upstream in July?
2
How dangerous is it to swim in the Amazon river?
6
Can you notice a waterfall in time to get off the river?