Do squirrels have front and full peripheral vision?

Our suburban yard in Massachusetts has a small woodsy area. We use a section for feeders for birds, chipmunks, squirrels, raccoons, opossums, rabbits, and the occasional bear or fox.

In an area of our patio, at least 20 feet from the closest feeder and that group of large trees, we put food down and stay within a few inches of, and sometimes directly on, the pile. Certain chipmunks, who we recognize by their markings, know where and when to wait for that food, and happily eat at our feet and even on our shoes.

This year, for the first time, a few squirrels have been daring enough to come close and eat. I'm surprised because they're usually quite skittish as they get nearer to the house.

In the first two pictures, I'm standing just behind the leaf at the bottom right corner, and the little squirrel, possibly a young Red Squirrel, Tamiasciurus hudsonicus, is not more than a foot away. He stood in that sideways position for a few minutes, then turned to face me. He then came closer, right under my feet, to find whatever whole seeds had been left by the chipmunks, and ate for a while. (I didn't take a picture then for fear of scaring him away.)

In the other two pictures, I'm in pretty much the same place, although it's hard to tell. I believe that squirrel is an Eastern Grey, Sciurus carolinensis, which is common here in America, Canada, and also in a variety of countries in the UK. He starts by looking tentatively towards me, then moves to where that food is and puts his head down to eat. I don't know if he chose that pile of food because it was the nearest to him, but I assume so.

I'm wondering what they're seeing in each of their body positions. Can they see me, or the chipmunk, only with both eyes facing me, or do they only need one? Can the grey squirrel with his head down eat and watch me at the same time? Can these positions also allow them to see what's happening around or above them?

I'm also curious if it's seeing the cat, but there's glass in between them, so there might be glare or other factors. The cat's always pouncing against that window and the squirrels and chipmunks never run away, so either they don't see her or they feel safe knowing they're protected by the window. I admit I really just added the cat picture because it's cute!

This is not meant to be a highly scientific question. I'm just curious because I spend so much time watching and interacting with my backyard animals, and their behavior fascinates me! 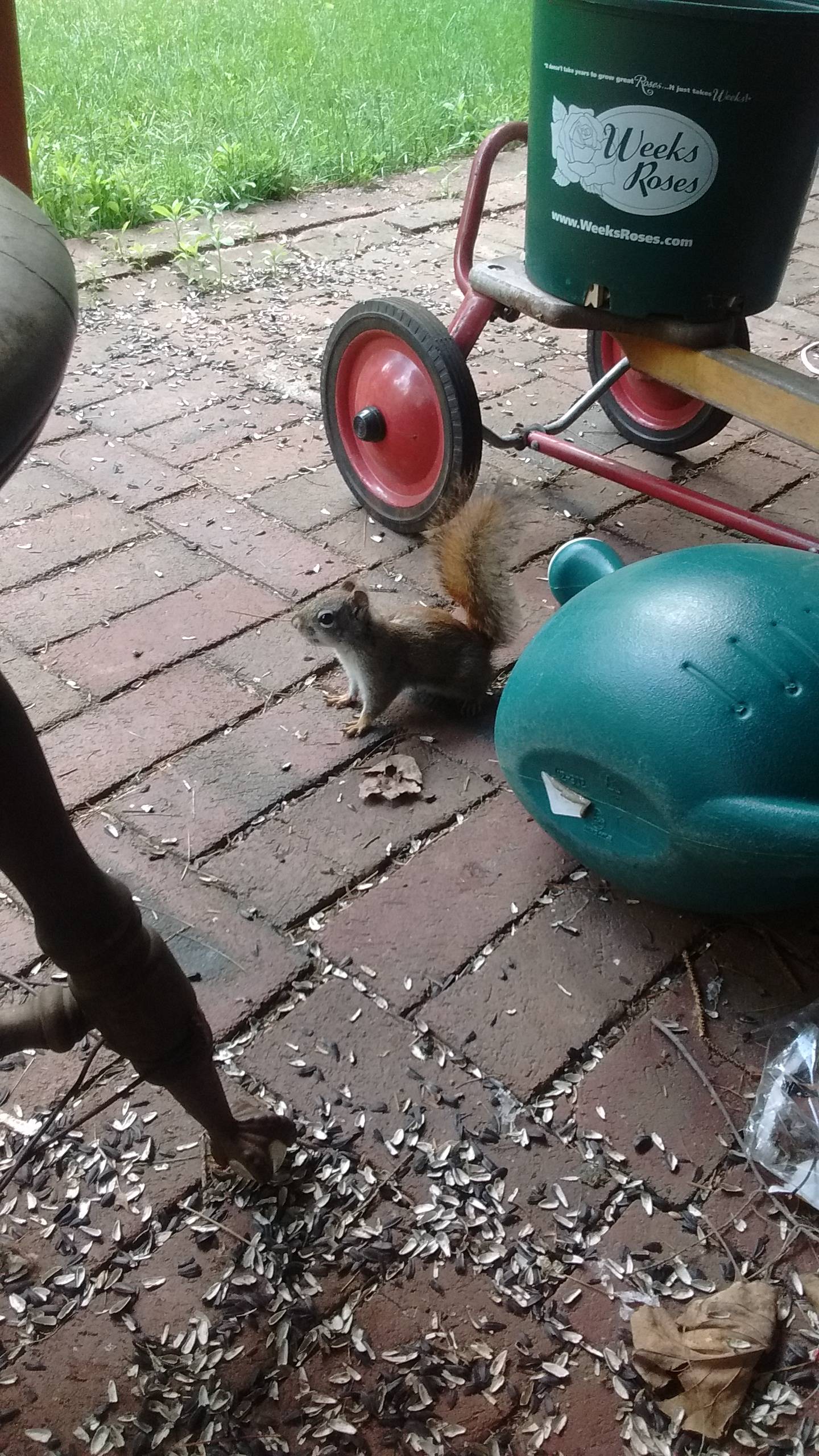 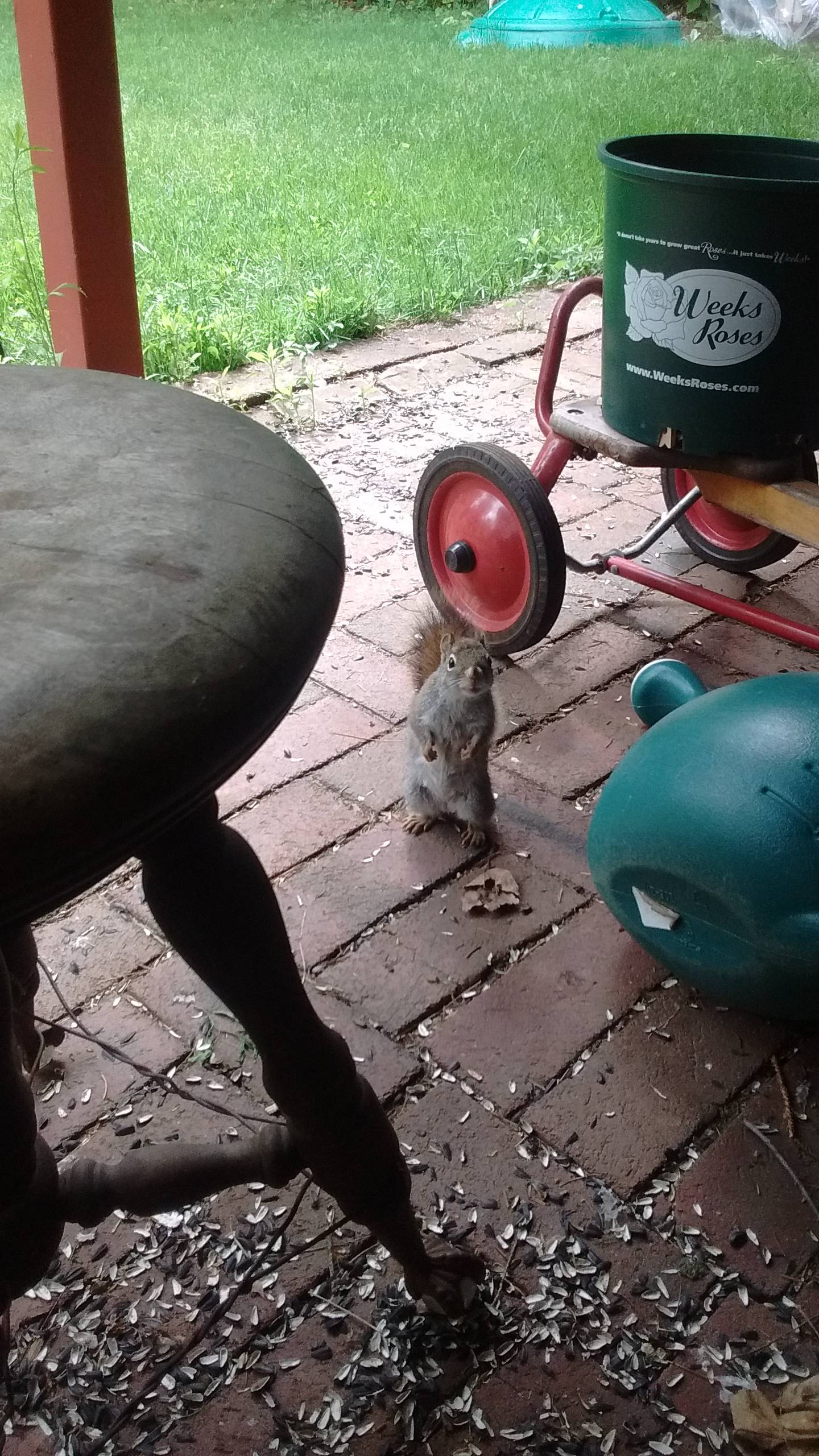 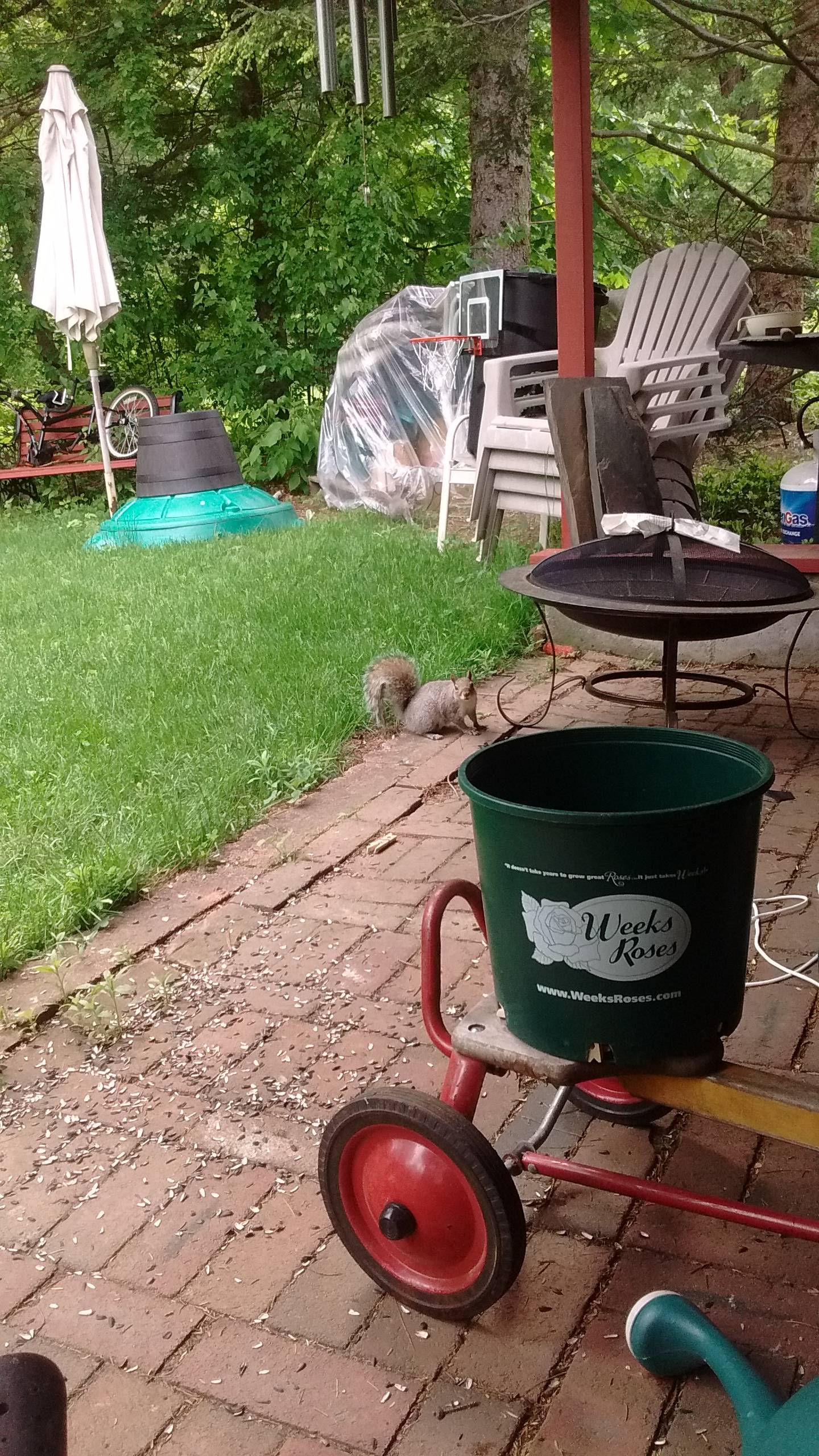 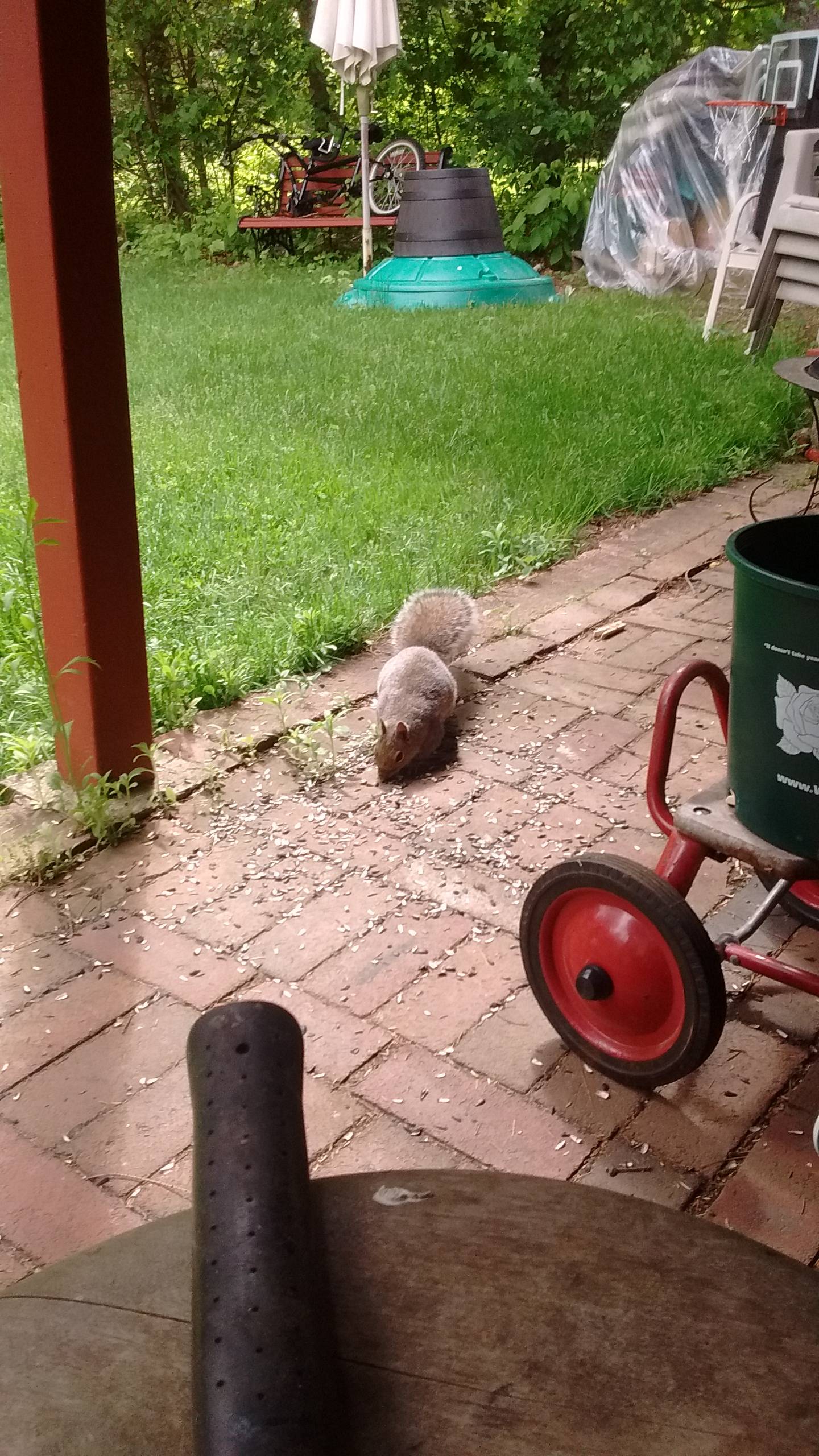 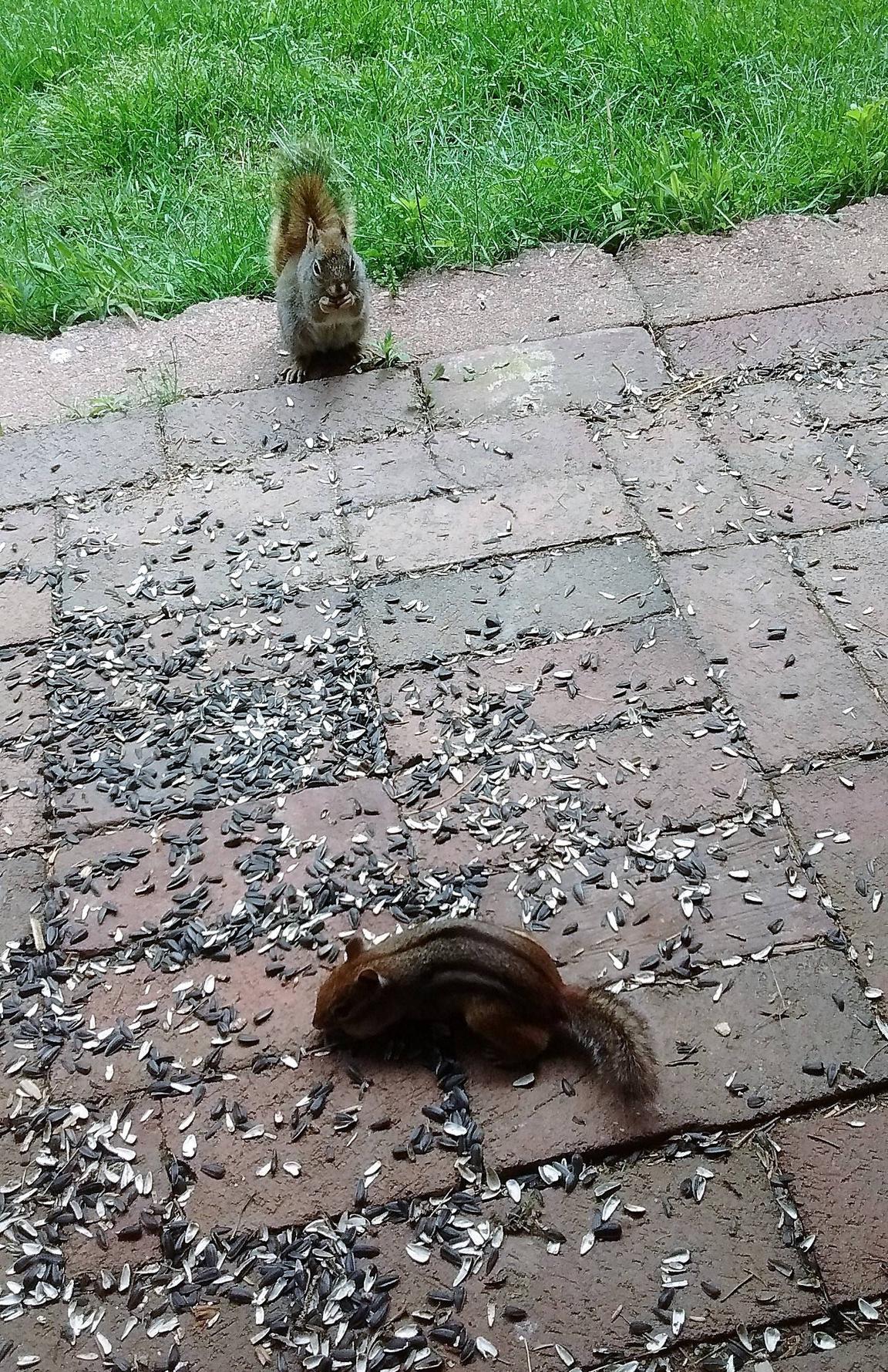 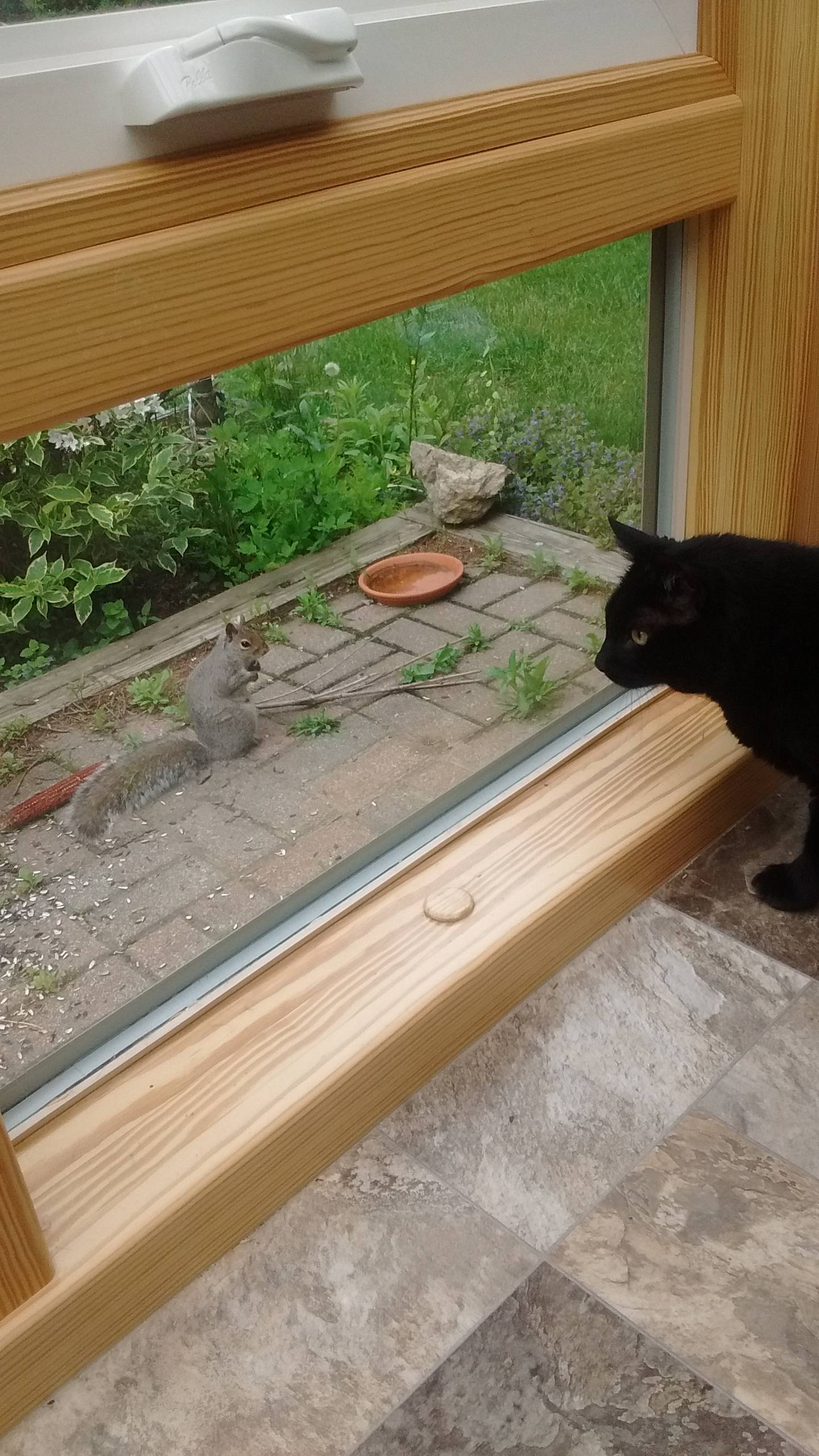 Like many prey animals, vision is optimised to detect danger coming from anywhere. They can see you with one eye very easily, and their reflexes are on a hair-trigger to take them away from incoming attack. They can see above them, and all around, with a blind spot to the rear, and a very small one just in front of the nose (which is thought to lead to accidental biting on occasion when feeding squirrels)

This diagram is for a rabbit (from vgr1.com) but the squirrel is very similar: 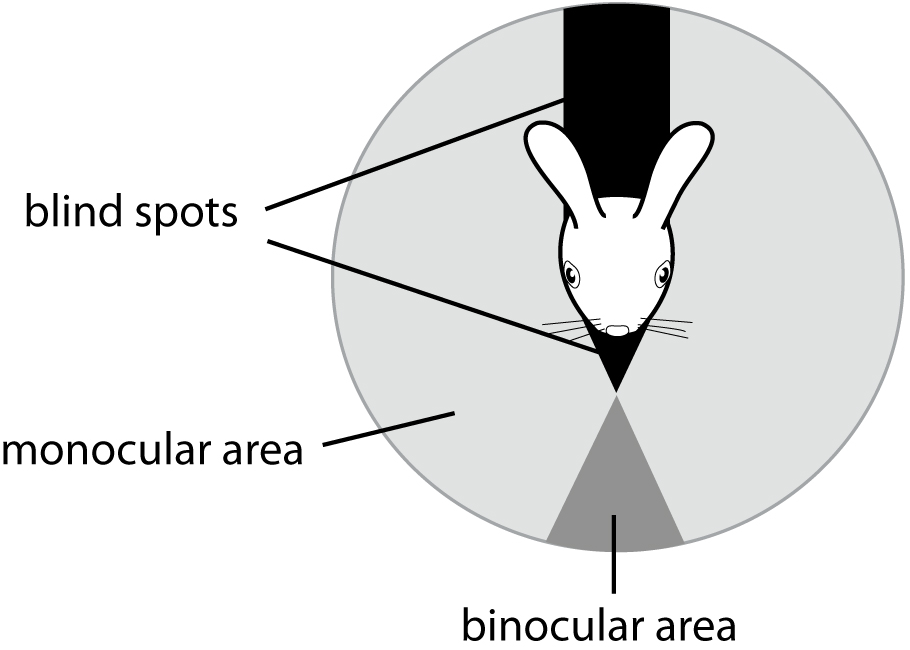 This is very different to predators, whose vision is generally for accuracy in targeting - hence binocular, front facing eyes, allowing very accurate distance perception. See this contrasting diagram of an owl's vision from owlpages.com:

Of even more interest is the fact that unlike humans, who have excellent focus in the centre of our vision, a squirrel's peripheral vision is as well focused as the centre, so predators coming from above or from the rear (although not directly behind) are also in perfect focus!

Having watched grey squirrels like that for many years in various situations, I feel very confident that the answers to your questions are:

Can they see me only with both eyes facing me, or do they only need one?

They only need one to see you. It is often very clear that a squirrel is seeing you and paying attention to you with one eye. My impression is that they tend to do this when they are not particularly alarmed/interested by you, and also when they are still wanting to keep the other eye on things in other directions.

Can the grey squirrel with his head down eat and watch me at the same time?

Yes. Squirrels have very high awareness of other creatures around them by vision and hearing, and they are generally very attentively tracking the movement of all other animals around them, even when eating with head down. Note that you can test this theory by moving an arm quietly but suddenly when his head is in a position you think he might not be able to see you. In general they will visibly react to most sudden motions they see.

Can these positions also allow them to see what's happening around or above them?

They seem to have some blind spots below and behind their heads and to some degree upwards and back, but if you can see one of their eyes, I believe they can see you.

Notice though that unless they are also concerned about other animals or directions, they will tend to focus on something of interest by facing it so both eyes can see and they get binocular vision, as shown in some of your photos.

Squirrels also have very good directional hearing, and they are very clever about thinking about where they can jump and climb to to avoid other animals, and seem to always be thinking about this and will even needlessly tease/play with dogs and cats and other squirrels in games of chasing and hiding especially involving trees and running around obstacles.

I have a very small yard and only one spot where I can place a pole feeder out of (or so I thought) squirrel jumping range. Approx 8 or 9 feet. But I have watched them climb up on the closest high point and seemingly compute the distance vs their ability. You can almost hear them thinking. Then they paw the ground and adjust their footing,just like a track athlete, crouch into position, and go for it...and sometimes they reach goal. So they must be able to see and judge distance at least that far. I'm continually having to make sure that chairs and other platforms are moved as far away from the feeder dish as possible. Half annoying, half entertaining!

7
Why does a fox defecate on my patio, which I use as a feeding station for critters?

5
What animal might uproot and relocate a newly-transplanted sedum?
9
How far does a nursing Eastern Gray squirrel travel from her nest?
29
Are grey squirrels really bad for the overall habitat in Germany?
10
Will a Rocky Mountain Goat attack a person?
3
How can I tell if there's a living snail in the shell, without picking it up?
8
Will a live clam on the beach have a better chance of staying healthy if I put it in the water?
4
Do Eastern grey squirrels pretend to bury nuts in the ground?
4
How do squirrels find buried nuts?
8
How can we be the most respectful to a moose when photographing it up close?
7
Why does a fox defecate on my patio, which I use as a feeding station for critters?