What is the intention behind webbing the rope through snow?

Please refer the image below. This is a screenshot from the movie Meru which is about the successful attempt of climbing Meru by Conrad Anker, Jimmy Chin and Renan Ozturk.

I didn't understand, why the rope is webbed/passed through snow? 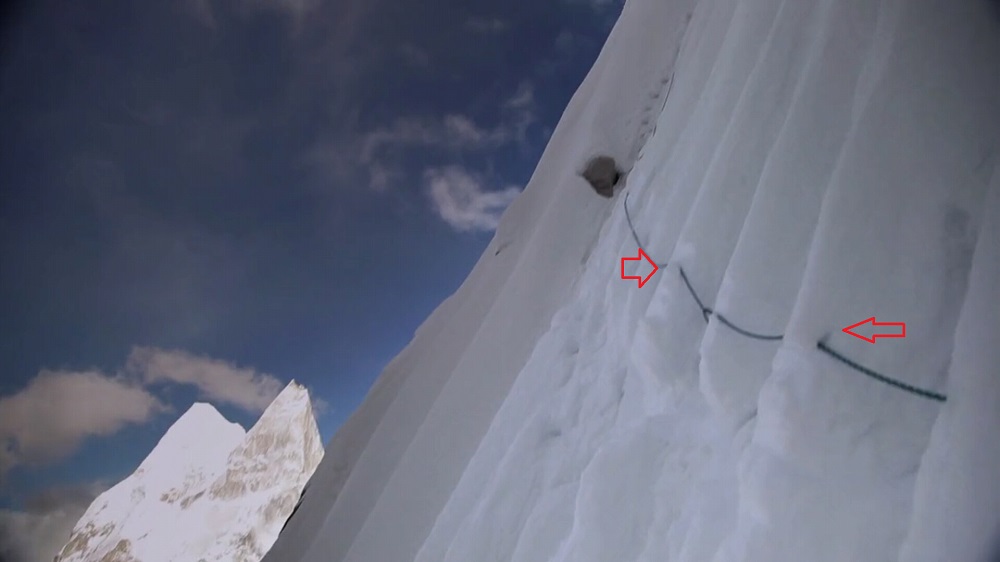 EDIT: I watched the film again, and I can confirm that it is snow and not ice.
P.S.: These 3 mountaineers aren't just any mountaineers that we usually come across. These are well-known, admired, recognized one of the most talented and experienced climbers/mountaineers around the world.

EDIT 2: I just saw the section of the film again, and it is a biner on the right side of the column which is at right hand side of the left red arrow.

The answer is in this video: https://youtu.be/seCiupa4I6U?t=1m2s

I'm not sure if it's the same traverse as the OP posted, but I'd bet on it. The thing that looks like a biner between the columns is indeed a biner, probably from an ice/snow anchor. The holes (especially the large one) are due to this biner. What happens is that when the leader requires slack and pulls the rope up, the friction between the rope and the columns before the biner is extremely one-directional: the biner forces the rope to run in an almost fixed angle theta from the belay. Every climber has seen this happen: you place a quickdraw and then the route has a horizontal traverse, and then when it gets vertical again you feel a lot of friction and look down - what you see is the rope being constricted by that quickdraw that preceded the traverse. The friction is mainly due to the normal force the rope creates against that biner, but in this case you also have a lot of friction against the columns before the quickdraws (since they're protruded and pass in front of the rope's way). I've sketched some draws: 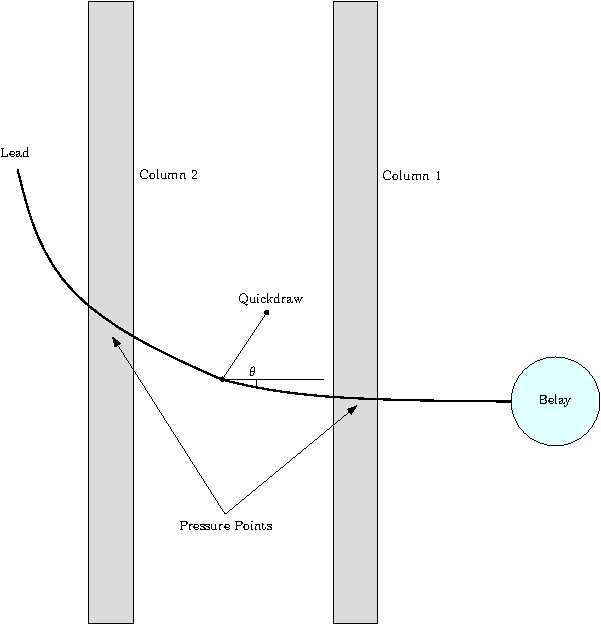 Column 1 (and the ones before it also) is the one that will experience the most unidirectional (mostly horizontal) rope slippage, and will acquire holes due to it. Column 2 will also suffer similar effects, because after the anchor the rope's movement is also unidirectional. The following columns will have no holes, since the rope has again a free angle to move until the leader places another anchor - that is, the rope will dangle and scatter the snow in a uniform manner.

This is in agreement with the picture and the video I attached shows pretty clearly that the quickdraw moves up and then, when it reaches a maximum angle, the rope is constricted to move in a single direction. After some meters I'm pretty sure the little hole it opens at each time it does that is already large enough for it to enter it completely.

Edit 1: the situation where the holes are inevitably dig is quite possibly when the leader ends the pitch and begins retrieving the excess rope for the second climber to come. This creates constant, fast rope action against the columns.

Edit 2: view from above added for clarity.

Not the answer you're looking for? Browse other questions tagged mountaineering ice-climbing or ask your own question.

17
At what point do I need snow goggles or glacier glasses when hiking?
13
Walking through a Thigh-high snow
2
Would tied strips of webbing have similar strength to a climbing rope?
8
What is the correct technique for self arrest, with an ice axe, on a snow or ice slope?
7
What are the advantages of horizontal front points on crampons?
9
Has Joe Simpson ever explained why he did not cut the rope himself?
6
What is the col between Mt Meru and Kilimanjaro?
30
At what angle should an ice screw be screwed into the ice?
15
Do I need a rope on the Großglockner?