What are these fungi that I've found growing on a dead birch?

What are these fungi I found on a dead birch? Initially, I thought perhaps artist's bracket or southern bracket, but now I think they might be horses hoof fungus? I'm not very knowledgeable about this sort of stuff so I could be well off.

I'm in lowland Scotland and, they were on the same tree though there was a darker bracket on a log that was on the ground right next to it. I was looking for cramp ball fungus and all I could find until these was wood-ear on some old dead elder.

The ones I touched were hard but I didn't try to get up to the ones on the tree, there was a swarm of beasties about and my dinner was enough protein for my tastes. The tree was split just below the half way point and was abundant. Some were greyer/browner on top and others were mainly white from bottom through to a thin top of pale brown/grey. 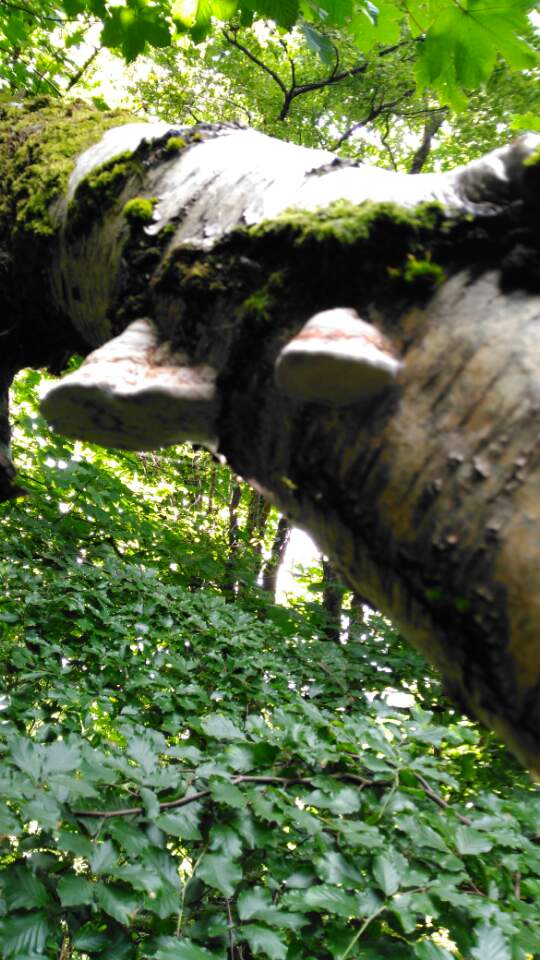 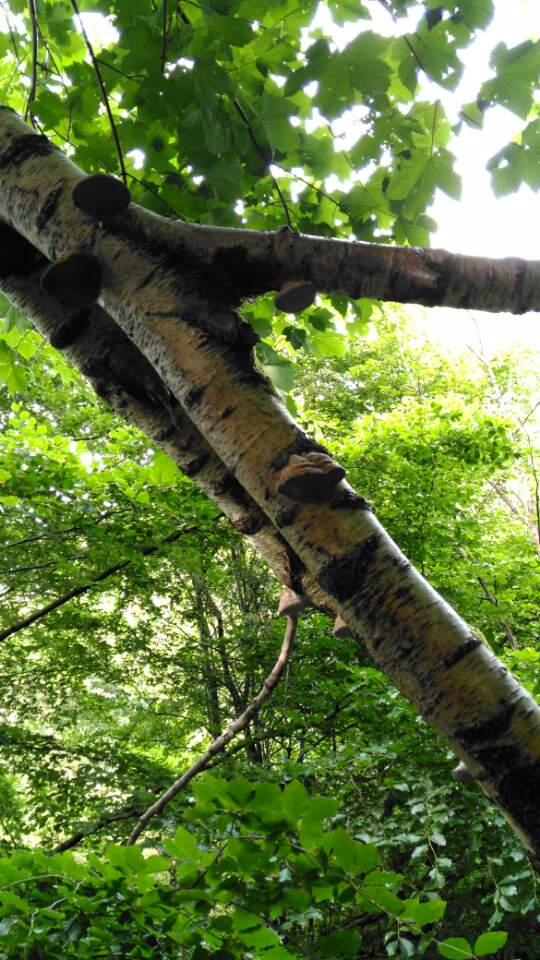 ps. sorry, I know the pictures are rubbish!

Here is a slightly edited photo that makes their features a little more distinct. 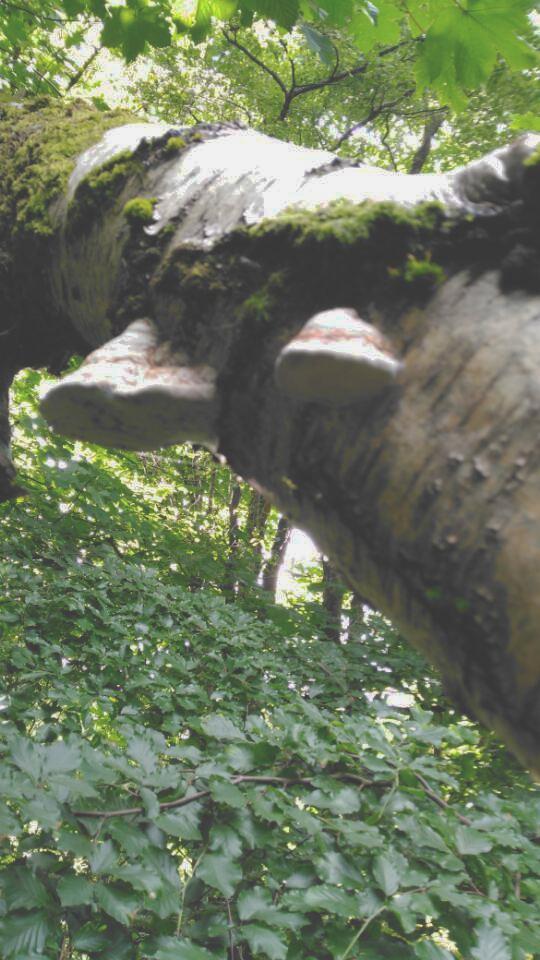 I had a few more photos, I edited the colour values on one of them to make it less bright and the other I'll just upload. You can see the trees state and its abundance clearly at least, if nothing else... and I also show in this second update the black fungi. 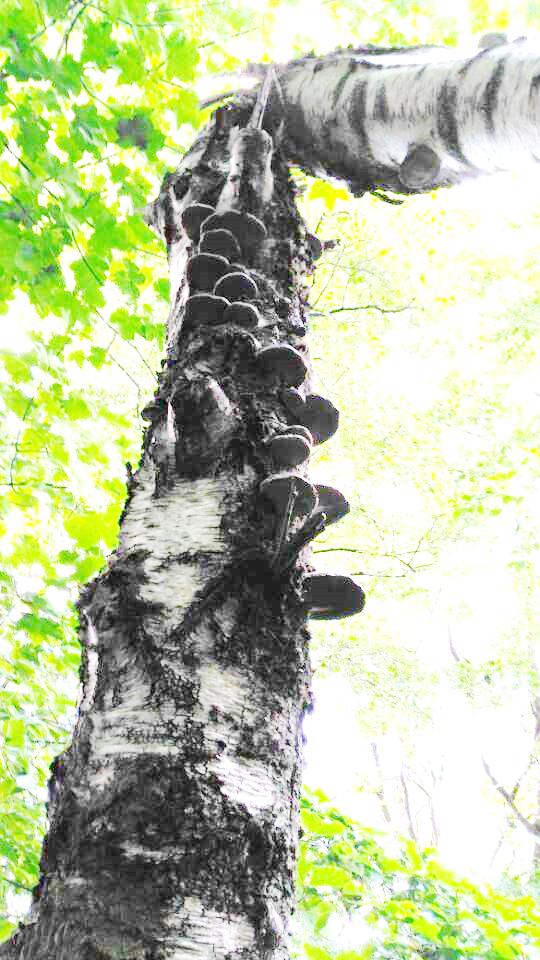 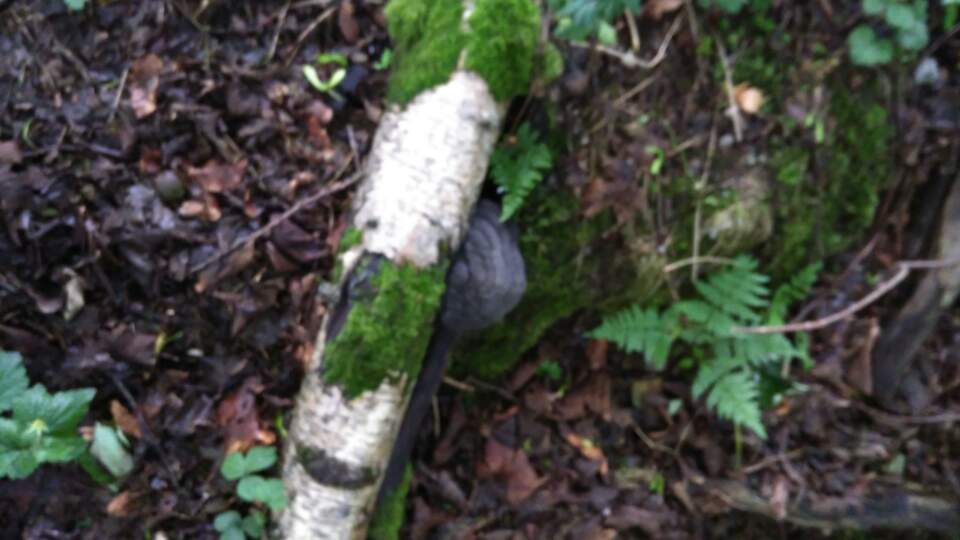 I went back and collected some, definitely sure it is horses hoof fungus and I'm looking forward to processing some amadou from it. Any ideas of uses for the spore tubes? 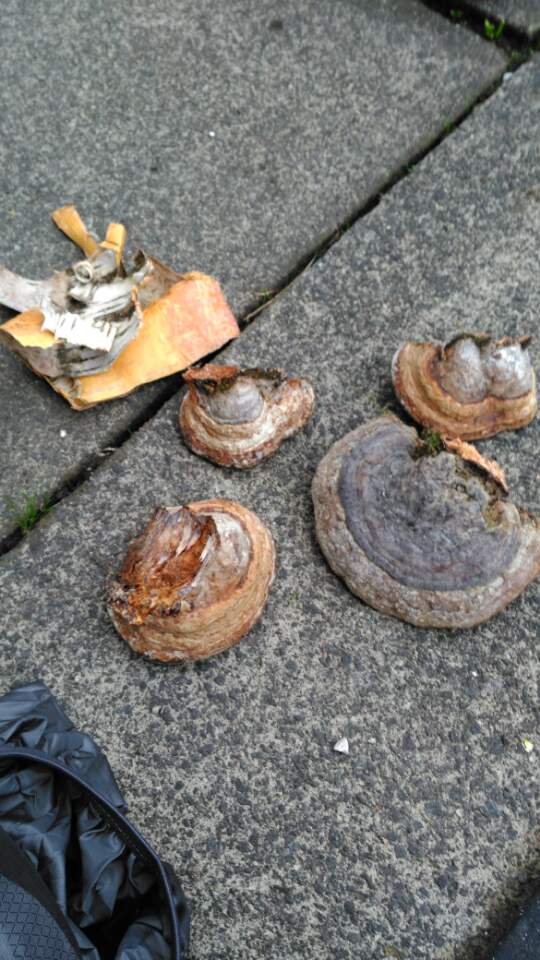 They are quite sturdy and apparently they are parasitic and can cause damage to living trees. They live a long time! I took a few and left the others for some other lucky passerby. Quite tricky to get off the tree though... seemingly if you cut free the trama layer, which is sort of like cork or suede, on the outer of the tubes, then let it soak in a mixture of water and ash, before boiling for an hour or so, then gently beating the material to loosen the fibers, you end up with a material that is great for taking a spark from flint/steel or ferro rod, and can smoulder for quite a long time, so you could use it to carry fire with you if you didn't have modern conveniences. Quite a cool fungus!

Thanks to everyone who helped out!

I would agree with your research, I am certain that it is Fomes fomentarius - Hoof Fungus. Common in Scotland, and northern England, becoming progressively rarer as you travel south.

Here are some that I photographed in the Great Glen, Scotland, when kayaking. 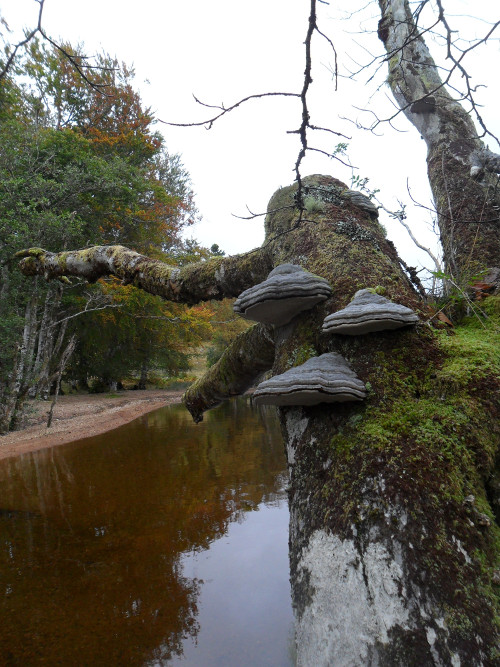 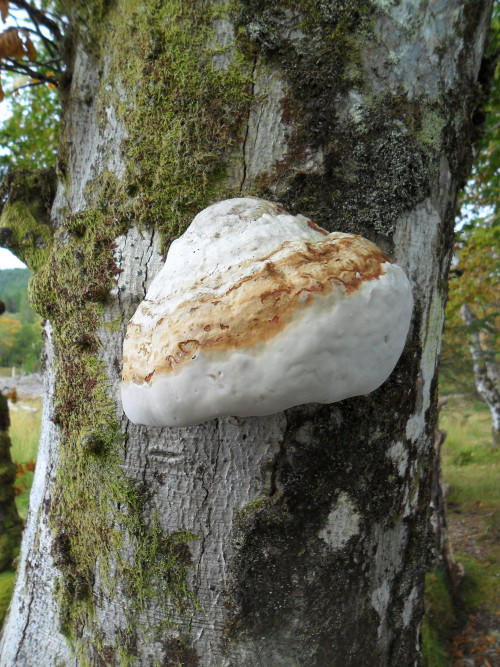 Apparently it can be used by trout fishermen to dry their artificial flies, and a dried bracket was found in the possession of Otzi the Iceman whose body was found preserved in a glacier on the border between Italy and Austria. (Source: Fomes fomentarius (L. ex Fr.) Kickx- Hoof Fungus).

There is a similar looking fungi that it could be Phellinus igniarius, but it is rarer in Britain and more often found on willows.

We called them birch ears here. They are antiseptic. If you get cut, slice some and cover the wound with them. But they are not an eating mushroom.

Not the answer you're looking for? Browse other questions tagged uk trees scotland fungi-identification or ask your own question.

5
Is this fungus on a birch tree Chaga?

9
What types of trees are in these intertwined groups in Massachusetts?
12
What are these bulges? Are they harming the tree?
14
How to assess the likelihood of a tree falling in a forest?
8
What kind of tree produces these seed pods looking like spiky balls?
5
Is this fungus on a birch tree Chaga?
7
What kind of animal may have done this?
45
Can removing dead wood harm the ecosystem?
3
What is growing in these cocoon-looking structures found on a mountain in Massachusetts, USA?
9
UK Puffball Identification
5
What are these painted markings on trees for? (not trail markers)