On a recent run which crosses the Humber Bridge my GPS watch seems quite confused by my altitude as I crossed the bridge, as if there is an 8m shear drop half way with the south side being lower.

You can see this clearly on the graph plotted after uploading the watch's data: 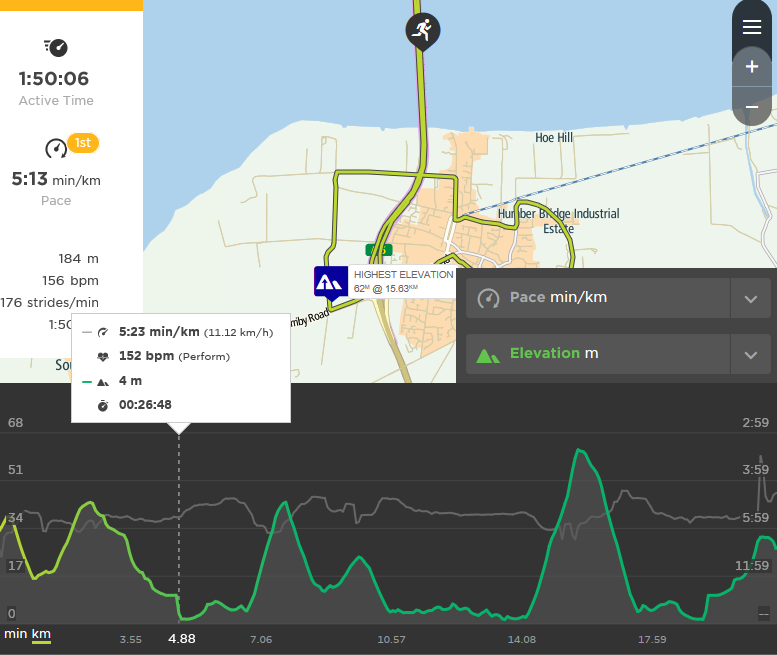 as we cross the half way mark going south ~4.88Km in and the reverse ~19.10Km in as we head back north. My first thought would be to just assume a fault in the watch's calculations, but I remember noticing the same signature in another trace of the route from a previous year when doing a little research before the run like so

and doing a little more research after the same can be seen in the official map for another run that crosses the bridge available here (the elevation map in the bottom right shows the same drop between ~17.5 and 20 miles when the route is south of the bridge's half way point).

Extra information as per the comments below: I'm using a TomTom GPS watch and their standard web interface. I have had a thought and will review the raw data from the device when I get home to see if the anomaly is there too or introduced in later analysis. I don't know what the data sources for the other graphs were.

Having talked about this to a couple of people offline who have some experience with mapping, we have a working theory (though I'll not accept my own answer unless+until others confirm these ideas).

So to summarise what happens going south:

Exactly the same occurs in reverse on the return leg of course.

The two half-marathon traces I included seem to be using slightly different map data. On the trace taken from my trip the riverside is an obvious curve and the "no data" section is shorter. On the other trace the altitude data stops closer to the sides of the river so the flat parts of the trace are longer. Also it seems that instead of using the nearest point on the map for which there is data it is using the last point visited for which there is data, so the sudden change in altitude occurs when altitude data "appears" again (near the sides of the river) rather than half way between the points where there is data, so near the end of the bridge the traveller is heading towards rather than in the middle of the bridge. The trace on the full marathon PDF is a little different again because the traveller never goes further south then the bridge exit, immediately turning under the bridge to join the other carriageway to go back north.

Comments? This seems to make sense in our heads at least...

This is basically a copy and paste from an answer I gave here http://gis.stackexchange.com/questions/234430/… There are also links to more info in the other answer

There could be a number of problems in play here depending on where you are, what the terrain is like, and what the capabilities of your device are?

Having been a surveyor in a previous time of my life, I can say that at least at that time (15 years ago or so) GPS was really quite good at lat/lon type coordinates, but not quite so good at elevations.

I suspect that your device(s) might be using different data sets, or the measurements just aren't precise enough in the particular area to be reflected properly in your graph.

Not the answer you're looking for? Browse other questions tagged gear gps or ask your own question.

5
Reattaching waterproof rubber on GPS
9
GPS topo map downloads
15
How to select a good GPS receiver?
8
Device with very accurate GPS location
9
Any actions to take with GPS rollover?
6
E-ink device with GPS for maps?
17
Are there any GPS devices with no transmission capability?