For example, see this image from this scoutpioneering.com post, where they call my "double half hitch" a Lark's Head, and "two half hitches" a Clove Hitch: 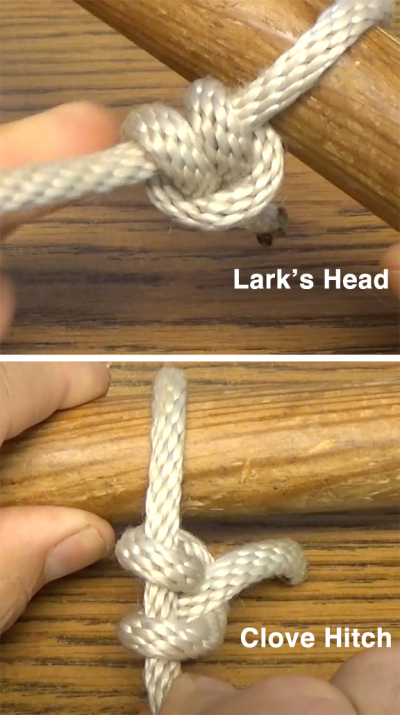 I should have asked the course leaders, but never did: is there a valid use for a double half hitch/Lark's Head? (It's the version I always tie, although it does seem to work free when intermittently loaded.)

First, a note on terminology. There are several groups of knots that have a certain what I call topology. When that topology in the rope is tied around a fixed object, the resulting knot has one name, but when turned around that object then tied around the standing end of the rope, it has a different name. Further, some knots can also be used to join ends of two ropes, and then it will have yet a different name. Examples include the pairs you listed:

Take a close look at these two as well, and you'll see the same topology:

In the clove hitch shown, the running end is on the outside of the knot's load, which means, the tightness of the knot relies on the knot tier's skill at keeping it tight.

Further, if the knots were tied such that there isn't much load on the knot (and there is more slip in the bight), then, the clove hitch will tend to twist out, eventually allowing the running end to unsecure itself from inside the knot.

Not the answer you're looking for? Browse other questions tagged ropes knots clove-hitch or ask your own question.

15
Which mid-line knot is best suited for a trucker's hitch?
6
Do Half/Twin/Double Ropes get Middle Marked?
14
Why are eye friction hitches not commonly used in rock climbing?
9
How can you tie a clove hitch one handed?
4
Undoing an over tight Clove Hitch?
9
Is a clove hitch to be distrusted in climbing?
7
How to tie a bull hitch using end(s)?
7
Alternative to midshipman's / taut-line hitch for modern ropes
2
Terminology for different ways of tying bends?