What is this brown bird with a white area over its eye, found on the top of a pine tree in Ohio?

Any ideas what bird is making this song? Unfortunately, this photo was the best I got, but I did get a lot of audio of it's call (the YouTube video has a bunch of them clipped together).

At the end of the video, you can see one of the birds (same kind as the one singing) fly away. In case it's flight gives any hints.

It sounds like it has at least two (maybe three) distinct calls. The one call, you can hear over and over, and was the majority of it's calls. But it also had one where it had 7 or 8 super-quick chirps followed by a high-low, high-low (specific spot in video linked here).

I'm in Northwest Ohio, US if that helps narrow it down. 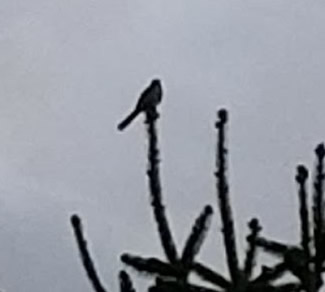 Rough Sketch Update: I saw it today through binoculars, but still couldn't get close enough / for long enough. I did see that it had some spots or lines on it's stomach (similar to a young bird, but it appears to be an adult). It was lighter brown than I was led to believe from the videos when it was silhouetted last night. It had a dark marking from its eye like a racoon, and white over its eye. It is roughly 50% to 70% smaller than the robins we have around here, which are probably American Robins, as described on this page from the Ohio Division of Wildlife. It appeared to be the size of a chickadee but with a longer tail. Larger than a gold finch.

The only times I've seen this bird, it was on the very top of a pine tree (like in the video). I've not seen it on the ground at all. There was a bird here last year that I never saw that was making a very unique sound. Not sure if it was this kind or not, as I wasn't able to find it and don't remember the song.

Today's look was quick, and I tried to remember as best I could, but again, it was from a distance, so the rough sketch below might not be super accurate. The first time I saw it today, I thought it may have had some orange tint on its stomach, but didn't see it the second time. 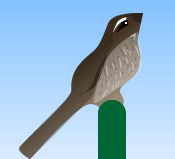 After much googling, it looks very similar to a female rose breasted grosbeak (if not exactly alike). I can't find a song that matches though, so I can't verify if that's what it is.

I am a western birder but that's what it sounds like to me. Out here they are usually found in wetter areas or in riparian habitat.

11
Did I see an Osprey?
4
What are these large black and white waterfowl with red around the eyes?
2
What is this gray bird that has black stripes on the side and around the head?
29
What is this animal with orange webbed feet, a white head with black stripes, and really likes breadcrumbs?
7
What is this black and white bird with thin brown legs and a multi-colored beak, found in Massachusetts USA in January?
10
Possible snowy owl seen in the trees
11
Why was I attacked by a bird (twice)?
6
How can a Common Kingfisher bird balance on a tiny swaying reed without moving its head?
6
Why aren’t birds using these feeders?
5
Can Cormorants swallow and digest large prey like eels whole?