What type of rope should I use to make a 1.5" Gym Climbing rope?

Use Climbing rope double up as braided as 1.5" Gym Climbing rope. What type, diameter rope, No of Strands?
Found these sample videos but curious to know what would be the best way to do this?

Yes, it's very common to braid a fast rope for climbing out of old rock climbing rope, however the key word there is old. You would typically use whatever retired climbing rope you can get your hands on, as purchasing new rope specifically for this would be very costly.

If using rock climbing rope, the the type, whether static or dynamic, dry treated or not, is unlikely to make a difference. The loads on such a rope (1/8 bodyweight per strand of an 8 strand braided rope) are so low that any stretch in the rope itself will be negligible.

The one thing that would make a difference is the rope diameter, as an 8mm rope would obviously lead to a braided rope 20% narrower than what you'd get from a 10mm rope. And I would estimate that a 10mm rope in an 8-strand braid would get you close to 1.5 inches final diameter.

You could use polyester rope if you really need it to be less likely to absorb water, but unless you're using it to climb out of the ocean, I can't imagine that would be a concern. If you do use polyester, make sure the rope you obtain is double-braided rather than twisted, as the latter will be much less comfortable to grip. (Double-braided is a sheath and core construction, similar to the kernmantle design of rock climbing ropes.)

Making the braid without cutting the rope is also possible, but limits your options, would be less neat and harder to work with. Are you really going to go to all the effort of braiding it just to undo the rope and use it for something else later? Much better to just get a used rope for cheap, and braid it with no intention of even undoing it.

It sounds like you've already figure out how to braid it without cutting, but here's an image to illustrate it. (Click to enlarge.) 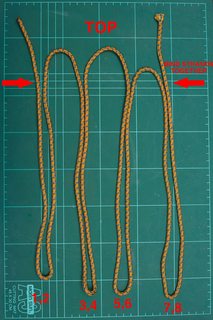 This approach requires that you follow the pattern for a four strand round braid, but using a pair of strands instead of single strands, thereby doubling the total number of strands to eight. The final product will have strands always running in pairs.

An alternative pattern that you could use if you cut the rope is to do a proper eight strand round braid, where the strands are braided individually instead of in pairs, resulting in a smoother, more evenly round final product.

I'm guessing you mean a rope like you get in school gyms, not climbing gyms.

I wouldn't say any climbing rope is a good choice here. Quite a few problems:

If you are going to do this I'd try and get hold of some retired rope (possibly from a climbing gym) and/or some static rope that isn't going to stretch that much (the kind used for setting up top ropes not for actually climbing on). Or better yet some soft hemp rope.

Not the answer you're looking for? Browse other questions tagged ropes diy rope-management or ask your own question.

9
What's the easiest way of improving my strength without a large investment of time?