Is ice-skating on lakes or ponds a sport in Iran (or Central Asia)?

This exchange of comments on English Language and Usage got me to wondering if outdoor ice-skating is or was ever a sport in Iran (or central Asia). Certainly it gets cold enough in parts of Iran.

Iran has ski resorts, and skiing has been popular in Iran for a long time. Good skiing is easily accessible from Tehran. However, the main population center, Tehran, has an average low above freezing, so skaters there are dependent on ice-rinks.

The rink is predicted to host thousands of Iranian ice-skating enthusiasts who have long been waiting for the standard hall.

The openning [sic] of the ice rink seems to be now even more important than before as Iranian athletes can exercise six ice-related sports in preparation for winter Olympics and Asian games, including ice skating and figure skating.

Global News shows a video of skaters enjoying the rink.

Skating, of course, started as an outdoor sport thousands of years ago: one source says more than 3,000 years ago in Finland. The same source says that ice-skating can be traced in China to the Song dynasty (960–1279 CE). See also National Geographic on the subject of ancient ice-skates.

However, I have not been able to find anything on outdoor ice-skating on natural ice in Iran. I could have generalized my search to ancient Persia, and the countries of Central Asia, but decided to ask the question here instead.

Afterthought: It may be that Central Asia is too dry, and Iran not cold enough, except in the mountains, which are sparsely populated. But it would be nice to know for sure.

There are at least two lakes in Iran which are commonly used for ice skating during the winter.

Located in the ancient city of Marivan in Kurdistan province near the western Zagros mountain range, Lake Zarivar, locally known as “Lost Paradise” is a river which is constantly full of water rooted from the melted snow of the surrounding mountains of the picturesque district, making it one of Iran’s most beautiful rivers.

Being within a short distance of dense oak forests, the river provides good chances for popular activities such as riding boats in the summer and ice skating during winter.

10 Wonderful Ways to Spend Winter in Iran also recommends Zarivar as a place to skate: .

There are some lakes in Iran’s cold western and north-western areas which get totally frozen during winter. As an example, the beautiful Zarivar in Kurdistan province gets thick enough for the ice skate in winters. Moreover, you can enjoy learning a great deal of folklore about the origins of Zarivar through Iranian Kurdish locals.

This picture is from their site: 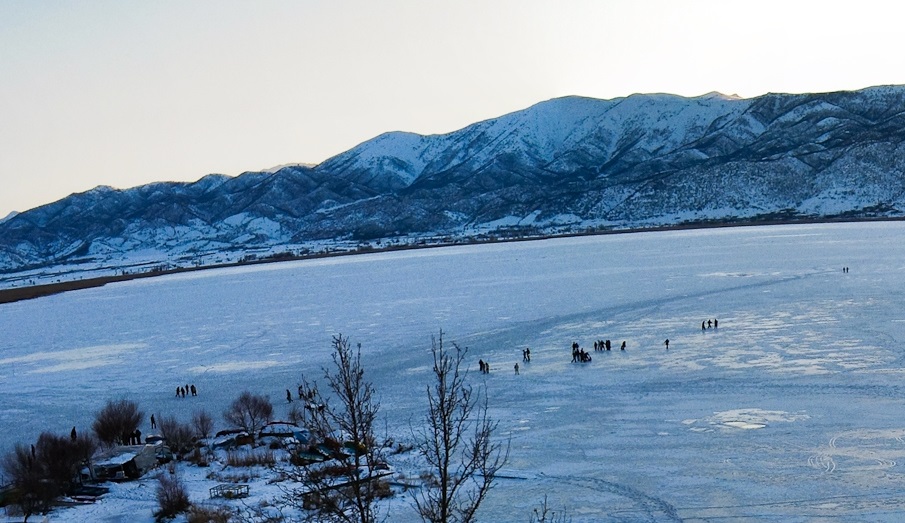 The other I found is Avan Lake, also called Ovan Lake.

The Magical Beauty of Avan Lake is a page solely dedicated to this lake, and things you may see and do there.

Alamut is a popular tourist spot due to its unique natural attractions and climatic diversity. Because of the heavy seasonal rainfall and snowfall in the winters, which at times reaches a few meters, it has numerous water resources.

However, Ovan Lake is among the most enchanting in the region and known for its magical beauty. Surrounded by Avan, Darbon, Zavardasht and Zarabad villages, the lake is located 1,800 meters above sea-level. The deepest section of the lake is 7.5 meters and extends over 70,000 square meters. It is fed by springs on the bed of the lake and annual precipitations. The excess water of the lake forms a small river which irrigates farmlands in the villages of Kooshk and Aayeen. Most residents of these two villages either breed livestock or work their land.

Ovan Lake is suitable for fishing, swimming and riding boats in summer while in fall it hosts migratory birds such as swan, goose and duck. In winter, the lake can be used for sports such as skiing and ice skating.

This site also has a description of the Avan Lake, as well as a map of the lake and the surrounding area.

The Avan Lake, in the Province of Qazvin (source link added by me) is situated in the historic Alamout area, home to the world-famous Alamout fortress, which was once the headquarters of the Ismaili sect, led by Hassan Sabbah between the 11th and 13th centuries.

The lake has a surface of 70 square kilometers (27 square miles) at 1,800 meters (5,905 feet) above sea levels. The Avan Lake is crystal clear and is solely supplied by underground spring discharges.

Fishing, swimming and sailing are the activities available during summer. The lakes surface freezes in winter and is suitable for ice-skating.

Not the answer you're looking for? Browse other questions tagged ice lakes iran iceskating or ask your own question.

21
Ice skating on a frozen lake -- how thick should the ice be?
18
How do locals (short of drilling) determine that lake ice is safe for skating, ice fishing, snowmobiling, skiing?