Is it a pheasant? A grouse? What do I feed it?

I live in the United Kingdom.

This cheeky fellow recently wandered into the house, scaring the life out of the missus, much to the amusement of the child. 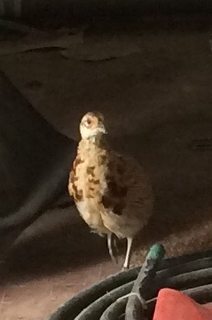 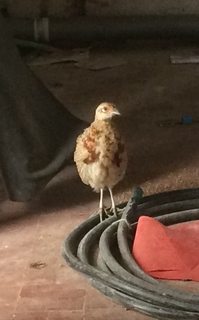 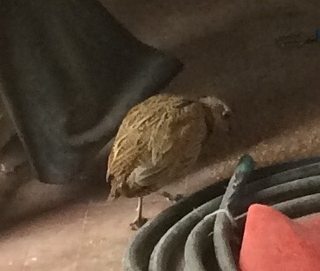 I put him out in the porch with a bit of wild bird seed mix I had kicking around from spring time, he ate some and wandered off. He's since been back for more and has taken to wandering in and out. I have a large garden with several well established trees, undergrowth etc. I don't mind him hanging around and am happy to put food out / make somewhere suitable in the porch for him to sleep but I'd like to know more info so I can put out the right food etc. Any advice on what he is, what he eats, bedding materials etc?

Why am I bothering with a wild bird, you may ask? Couple of reasons - I live near a very fast road and it'd be a shame for him to get flattened. He looks young and on his own and I suspect he's not truly wild; there are a couple of places round here that keep and breed pheasants (as far as I'm aware) and he may have come from there/ have been raised in some form of captivity. I've made enquiries with the locals but no one has responded to say they're a bird short, so if he's heading towards a career in the big outdoors, I don't mind providing a helping hand (and if he becomes a semi-pet, no big deal either, though he does poop like a trooper, so maybe he can stay outside) 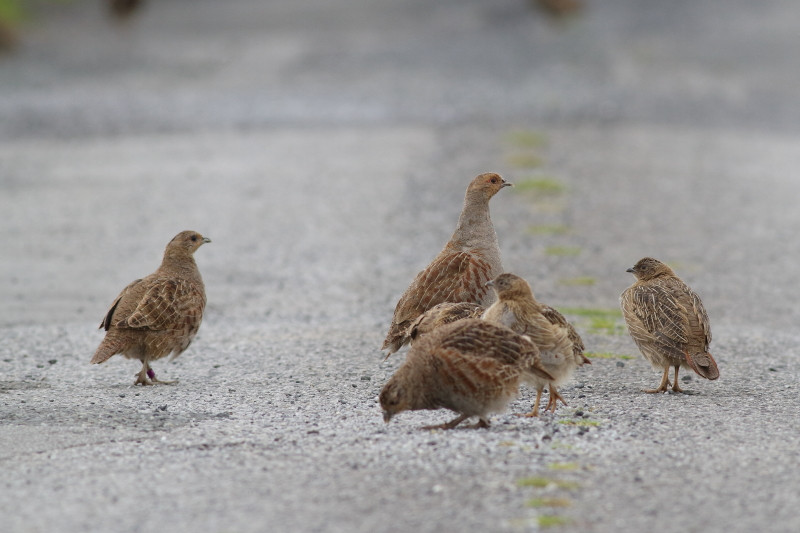 RSPCA has more info on them

A medium-sized, plump gamebird with a distinctive orange face. Flies with whirring wings and occasional glides, showing a chestnut tail. It is strictly a ground bird, never likely to be found in pear trees! Groups of 6-15 (known as coveys) are most usually seen outside the breeding season. Once very common and widespread, it has undergone serious declines throughout most of its range and is a Red List species.

he's not truly wild; there are a couple of places round here that keep and breed pheasants

These are likely shooting reserves. They try and keep the birds pretty wild in these, normally feeding at a distance, etc. I think partridges are just not really very afraid of humans (right up until the point where they got shot). So this will be pretty much a wild bird (or at least semi wild). though probably used to seeing humans and don't regard them as a threat.

Partridge are ground nesting. So they'll make their home in any long grass with good cover they can find.

I'm a bit late, but hope I can add something to the excellent answers you've already received.

I agree with the general concensus that it's probably a young grey partridge (Perdix Perdix). The adult would generally have brighter colors. I've never had one, so I can't speak from experience, but since you're interested in taking care of it, I can give you some information I found online.

This partridge is a ground hopper. They don't fly very high or very often. They almost never migrate, so yours is probably not too far from where it was born. They're usually in small family groups, so it may have become separated from its group and is wandering around the neighborhood looking for them. Your concern about the road is definitely valid. It has made it to your yard more than once, but may not be as lucky every time.

In the past the main reason for raising pheasants was for food or sport-hunting, but since their numbers have declined dramatically over the last few decades, many farmers are now attempting to create optimal conditions to increase the population. In some parts of the UK, these controlled farms are the only places this bird is thriving. Therefore, I'd continue checking with your local farmers to see if they're missing one. Local feed stores can also tell you if anyone has reported strays.

If you want to keep it, even for a while, here are some basics. (Much of this is overkill for a quick stay at your hotel, but it's interesting so I decided to include it!)

Food:
You've been given excellent advice, including from Tom Gaskill, who has first hand experience raising this family of birds, so I'd trust that!

Seeds and seed mixes are required all year round, but not as their sole diet.

For young birds, insects can be up to 90% of their diet. Their preferences include caterpillars, beetles, bugs, ants and aphids. They gradually need fewer protein sources, and by the time they're adults, animal foods only make up about 10% of their diet.

Adult grey partridges seek places where they can find lots of seed food throughout the year. During the spring and early summer, partridges feed mainly on green leafy material, including dandelions, small grains and assorted grasses. In the summer and fall, weed seeds of plants including foxtail, wild buckwheat and linotweed are abundant sources of food.

Cultivated grains, such as wheat, corn, oats and barley are another essential food source: such grains can account for over one-third of the bird’s summer diet and become increasingly important through the winter In many areas of the partridge’s range, field stubble and waste grains (especially corn) constitute nearly all of its winter food supply. (Source.)

Bedding:
They nest and sleep in the ground, so mimicking those conditions is the best idea.

It sounds like you already have much of what he needs right in your yard. Anything you can use from your garden or trees will work. Tall grasses, short grasses, tree leaves, piles of soft brush and lightweight branches are all good. Soft-type hay is okay too.

Long term:
I know you only mentioned wanting to keep him comfy for a while on the porch, but in case you're interested in doing more, there are lots of good articles about how to create a year-round home for your new friend. Since you already have trees and a garden, you might not need to change a lot. Depending on your yard, the following might be too much, but a scaled-down version would certainly work.

You can provide seed food throughout the winter at a low cost with wild bird cover. Establish a seed-rich crop in the spring and maintain it for two years. Kale and quinoa are particularly useful components in the mix.

You can also establish brood-rearing cover in the autumn. Use a mix of a cereal and a brassica, such as mustard or linseed, and up to 5 per cent red clover to attract insects.

Conservation: (I'm adding this because you said you like him, and because I like him!)
The grey partridge is "Globally Threatened" and has had a "Severe Decline" in its appearance in the UK over the last few decades. As I mentioned earlier, the primary problem is destruction of their habitat, so they have less to eat and fewer good nesting places. This is happening for many reasons.

The Game and Wildlife Conservation Trust (GWCT) is working with the British Government to create ways to bring back the grey partridge population.

I encourage you to check out their long term monitoring project called the Partridge Count Scheme. They use information from all available sources to try and help in the fight, and ask anyone to please report sightings, including you! Even your one little bird visit will make a difference for the future of these guys.

Regardless of what kind of game bird it is (although I'm with Liam--it's probably Grey Partridge), the dietary requirements will be similar. All game birds need a significant amount of protein in their diets, in addition to the expected seeds and greens. If there is a feed store nearby, you should be able to get game bird diet (preferably) or chick starter food. Be sure to get the un-medicated version. (Rabbit food will do, if nothing else is available.) A good seed mix is also helpful. Most game birds also like alfalfa hay. A little crushed oyster shell will provide useful minerals and calcium. I feed my quail chick starter, alfalfa, seed, and oyster shell, and they thrive on it.

I would start with any bird seed blend you may have. After all it is a bird and I have turkeys and even deer eat my bird seed so it'll eat it.

Not the answer you're looking for? Browse other questions tagged birds uk bird-feeding bird-identification or ask your own question.

13
How to encourage birds into the garden of a rented house?
16
What should I feed ravens/crows?
6
Is it safe to feed swans in the United Kingdom?
4
What are these large black and white waterfowl with red around the eyes?
2
What is this gray bird that has black stripes on the side and around the head?
29
What is this animal with orange webbed feet, a white head with black stripes, and really likes breadcrumbs?
6
What factors should be considered when helping to feed crows/ravens in the yard?
10
Finding dead hummingbirds on my property
6
How can I help birds know how to feed from feeders?
7
What can I do to get garden birds back after hawk has made my bird-feeder his hunting ground?