Its a technique I learned from a german mountain/climbing guide friend of mine. Personally I think it's a lot easier to lengthen the sling than the standard way of making alpine draws. The knot reduced the runner rating in half, but since there are two strands , its back to the UIAA standard of 22KN, well above any forces seen in lead falls on intermediate pro (not to mention the ratings on the pro itself).

On a recent trip a climbing partner pointed out that the girth hitch can induce horizontal forces on the carabiner, and if the hitch slips "up" the carbiner it can even load the gate and slide off. Which got me to reexamine my alpine draw technique.

Just to demonstrate, (not my image), the way a girth hitch looks on the biner. The two loops have a slight tendency to slide up the two sides of the biner if the knot isn't loaded/tightened (I make sure to give it a yank when placing). 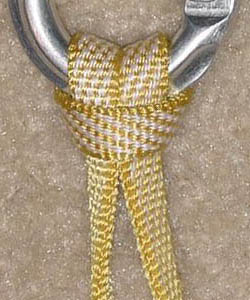 So is what I'm doing bad or known to be wrong? I trust my guide friend, but maybe I should pass on this particular tip?

The knot reduced the runner rating in half, but since there are two strands , its back to the UIAA standard of 22KN ...

The 22kN rating is for the loop strength of the sling, not the single-strand strength. Therefore any reduction in strength caused by a knot puts the strength below the 22kN standard. Stated strength for a girth hitch varies from one report to another and with the specific connection (around a large object, sling on sling, on a carabiner), knot orientation (bend angle), and sling material. I encourage you to research this, or even better if you can have your specific combination pull tested.

Also, I'm not convinced the girth-hitch method is that much more convenient. This seems pretty fast:

Incorporating article links from the comments that are relevant:

By coincendince, I asked the same question to a guide last weekend. His response was this:

If the top biner gets loaded weirdly against a hanger, a fixed connection to the sling (girth hitch) makes it more likely that the biner will break.

This is why non-alpine draws have the top biner free and the bottom one fixed.

Yes, this will reduce the strength of your sling.

Look at the rating on your carabiner, though. It's probably something like: 23kn, 7kn, 7kn.

What will reduce the strength of your system most? Loading your biner sideways!

This technique is a great way to mitigate that risk. Much more worth the reduction in strength of the sling, even if it is as much as 50%, to reduce the risk you load your biner on the gate. Just my two cents. If you're trad climbing as I expect, your piece of pro is probably only rated to 10kn anyway, and this is much more than you'll ever experience in a normal fall (provided you don't do something dumb like directly connect to a piece with a static line and experience a factor 2 fall).

An aside, what you mention about the tendency to slide up is why I prefer D-shaped biners over oval biners. I feel like they don't have this tendency as much, but this is just my preference in the end.

16
Slings for anchoring and lanyard in rock climbing

16
Should a carabiner ever be clipped to the tie-in loops and should anything other than a carabiner ever attach to the belay loop?
16
Placing protection efficiently when leading trad?
4
Shortening a shoulder-length sling to half-length?
7
Chaining locking carabiners
10
Hitch with no ends
10
Should you occasionally use locking biners on pieces of protection when using alpine draws?
10
Distel Hitch vs Prussik
9
How can you tie a clove hitch one handed?
7
How to tie a bull hitch using end(s)?
7
What is wrong with this belay setup?