What insect makes this hissing type sound, especially in the summer?

During the summer, I always hear this sound.

It's like a long "hissing" sound. I assume that it is some sort of insect that produces this, and it's usually during warmer days. It can be heard all day long, but I don't think at night I've ever heard it. What bug makes this sound?

Its very hard to distinguish from that sound clip but my guess as to what you are hearing is probably cicadas depending on your location. They can sound like a buzzing or hissing noise and generally are most active during the peak of summer. If you look you will probably find their shells they have left behind after crawling out of the ground to start their second phase of life. (seen below) 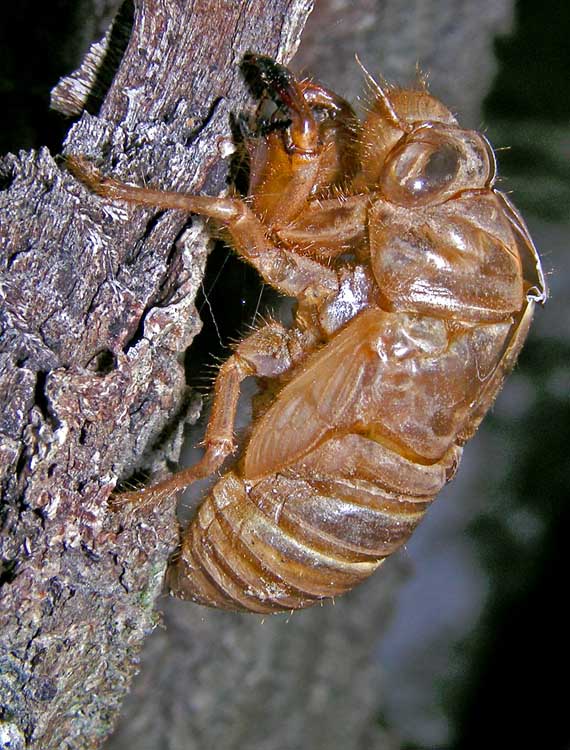 And here is one after leaving it's shell: 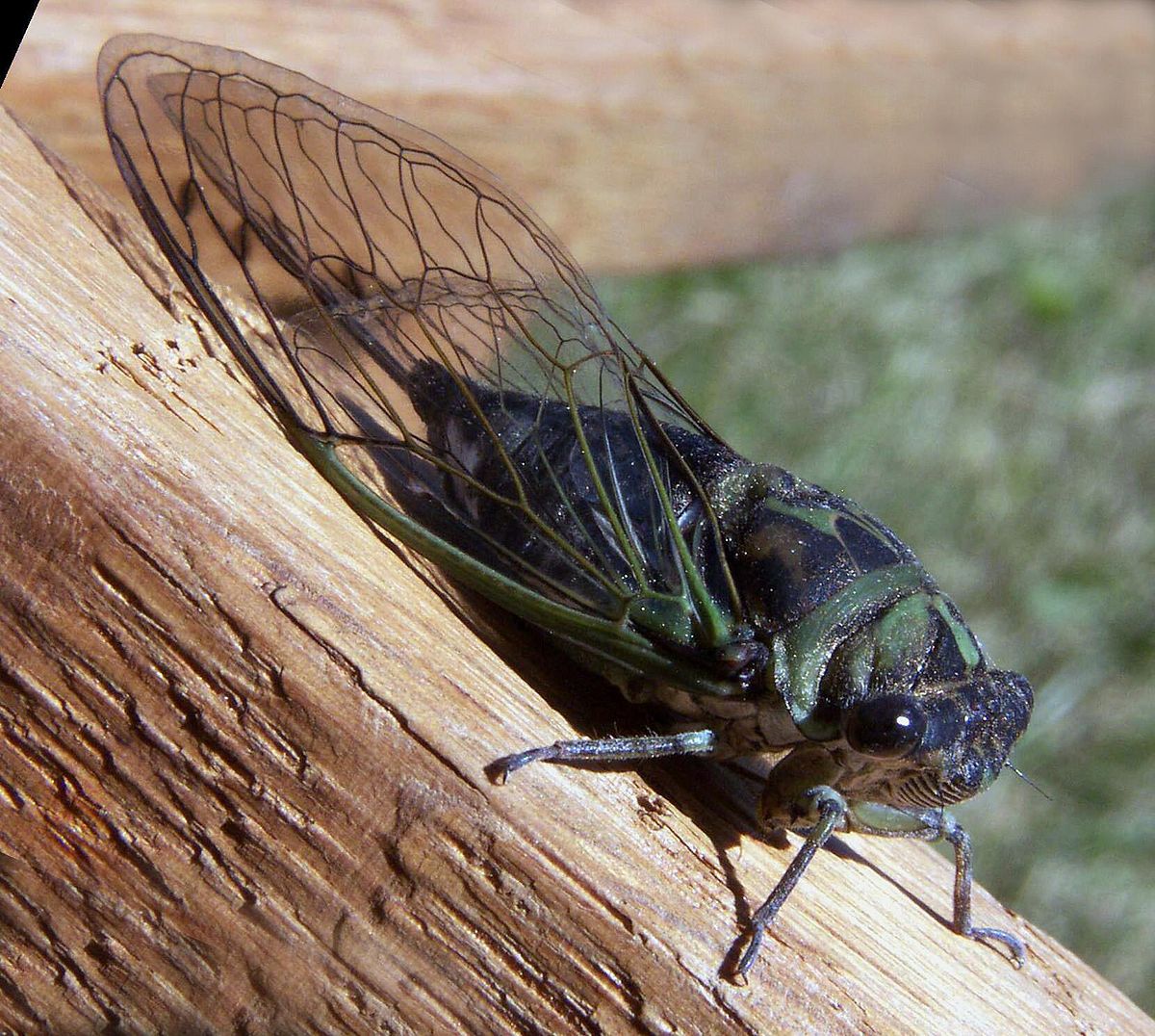 You might watch this clip and see if it is a similar noise to what you are hearing.

They are interesting creatures for sure, they live for up to 17 years, but once they crawl out of the ground and shed their shell and get wings, they only live for about 5 or more weeks in which they try and find a mate. Also a favorite food of copperhead snakes and the sole receptacle for cicada killer wasp larva, So they have tough lives once they crawl out of the ground.

Cicada killers are a wasp species that uses these to house their larva, they sting them which paralyzes them and they drag them to their burrows where the wasp lays eggs in the still living cicada, its young then hatch later and eat the cicada for nutrition. The holes you find, if the size of your finger in width may be wasp burrows. There is usually but not always a pile of dirt around the hole that looks like it has been balled up.

Cicadas are insects, best known for the songs sung by most, but not all, male cicadas. Males sing by flexing their tymbals, which are drum-like organs found in their abdomens. Small muscles rapidly pull the tymbals in and out of shape — like the cap of a Snapple bottle. The sound is intensified by the cicada's mostly hollow abdomen. Female and some male cicadas will also make a sound by flicking their wings, but it isn't the same as the song cicadas are known for.

Cicadas begin life as a rice-shaped egg, which the female deposits in a groove she makes in a tree limb, using her ovipositor. The groove provides shelter and exposes the tree fluids, which the young cicadas feed on. These grooves can kill small branches. When the branches die and leaves turn brown, it is called flagging.

Once the egg hatches the cicada begins to feed on the tree fluids. At this point it looks like a termite or small white ant. Once the young cicada is ready, it crawls from the groove and falls to the ground where it will dig until it finds roots to feed on. Once roots are found the cicada will stay underground from 2 to 17 years depending on the species. Cicadas are active underground, tunneling and feeding.

After the long 2 to 17 years, cicadas emerge from the ground as nymphs. Nymphs climb the nearest available tree, and begin to shed their nymph exoskeleton. Free of their old skin, their wings will inflate with fluid and their adult skin will harden. Once their new wings and body are ready, they can begin their brief adult life.

Different Types of Life Cycles There are three types of cicada life cycles:

Periodical: Cicadas species with periodical life cycles emerge all together after long periods of time, for example, Magicicada septendecim will emerge every 17 years (Find out where they'll emerge next).

Proto-periodical: Cicada species with proto-periodical life cycles might emerge every year, but every so many years they emerge in heavy numbers, like the Okanagana.

How Many: There are over 190 varieties (including species & subspecies) of cicadas in North America, and over 3,390 varieties of cicadas around the world. This number grows each year as researchers discover and document new species. Cicadas exist on every continent but Antarctica.

The Largest: The world's largest species of cicada is the Megapomponia imperatoria, which is native to Malaysia. The largest species in North America is Neotibicen auletes, aka the Northern Dusk Singing Cicada.

The Loudest: According to the University of Florida Book of Insect Records, the Neotibicen pronotalis is the loudest cicada in North America, and can achieve 108.9 decibels. Australian species of cicadas, like the Double Drummer (Thopa saccata) are said to exceed 120 deafening decibels at close range. The loudest cicada in the world is supposed to be the Brevisana brevis, a cicada found in Africa. At a distance of 50cm (~20") B. brevis reaches 106.7 decibels.

Longest Lifecycle: The most well-known cicadas in the North America are the Magicicada periodical cicadas, aka "locusts", which have amazingly long 17 or 13 year lifecycles. Brood VI (17 year life cycle) will emerge in North Carolina, South Carolina and Georgia in 2017. Read more about where and when.

Edit for Sue: I found your question on the Cicada Mania site. They had this to say..

A few people have asked me if cicadas sing at night. The truth is, in most cases they do not. Most of the time when you hear an insect at night it is a cricket or katydid. However, there are a few cases when cicadas will sing at night:

In the presence of artificial light sources, like streetlights & flood lights, or a full moon. I turned on a flood light tonight to test this and it worked: a cicada started to sing.

Not the answer you're looking for? Browse other questions tagged bugs bug-identification or ask your own question.

4
Identification of bugs on porch

11
Tiny crab/bug in Pacific NW; makes shell out of rocks/sticks. What is it?
13
What are these strange insect nodules on my front porch?
3
What kind of cockroach is this?
6
How can I identify Woolly Adelgid on a Hemlock tree?
6
Is this a dragonfly or a damselfly?
5
What type of centipede is this?
5
What type of insect is this orange-camouflaged creature?
19
Identify this insect found indoors in Ireland with a double tail and antennae
16
How to deal with hordes of flies in outdoor toilets?
0
What type of ladybug is this?