Lowering other members of a party on belay after rappelling

My plan is to set up a rappel anchor, using one or more slings around a boulder and thread the rope through rappel rings, or more likely, quicklink carabiners.

The process to get down into the notch would be as follows:

Are there any special considerations for this method? How should I build the anchor knowing that the rope will be moving through it, possibly multiple times?

Here is what I don't like about your plan, the less experienced people will be tying themselves in without you present and the last person won't have a second pair of eyeballs to double check that they have everything set up right.

However there is a way to have everyone set up ahead of time. What you want to do is throw both ends down and then set all of the ATCs up to rappel. Extend the ATCs with a sling so that the people are not pulled to the ground. 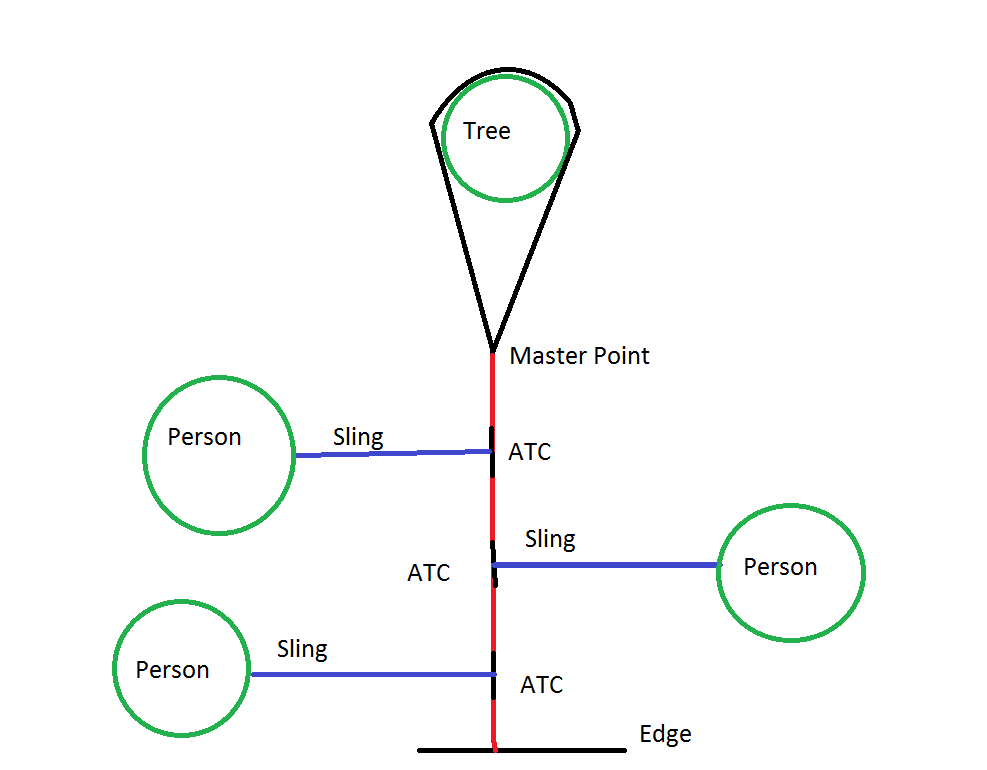 This way you can do a double check that everyone is set up properly and ready to go. Also you will be able to give them a fireman's belay at the bottom.

I would take them rappelling first before you take them on this trip.

Extending everyone's rappels and tying everyone into the rope before the first person descends is the proper, safest way to do things, unless you wanted all the followers to tie an autoblock as well. It's the quickest, simplest, safest thing to do.

The alternative would be to set up a proper top-belay anchor, lower all your friends from the anchor one at a time, then clean the anchor and rap down on whatever you're leaving behind. Or, you can have you friends rappel by themselves, but keep them on a backup belay with a second rope (also from above, you can also accomplish this using one rope: rappelling on one half, and using the other half as the backup belay). This way they get a chance to give rappelling a try, but you've got an extra line on them incase they slip up.

My approach would depend on if I was confident that the rappel was straight forward with an obvious bottom with a solid secure place to become unsecured from the rope. If everything is straight forward, I would probably lower each person from the top and after everyone else is down rappel myself. Being lowered from the top is pretty similar to being lowered from the bottom, so the less experienced individuals should not have any problems. This lets you check that everyone is setup correctly before beginning to lower them. It also means you can monitor people near the edge and the rope as it goes over the edge.

If the descent for the first person could be tricky or an anchor needs to be set up at the bottom, then it might be better if you go first. Instead of them tying in, I would probably have them each clip in to a large locking carabiner (maybe two that are opposite and opposed). The key thing to stress in this situation is for them to NOT drop the rope. If you have a bunch of people, this is really asking for the rope to get dropped.

When setting up the anchor, for either method, you need to be aware of the edge. Putting the "master point" right at the edge decreases the chance it runs over anything sharp, but it also makes it more tricky to weight the rope. Putting the master point far from the edge makes weighting the rope easier.

While Charlie Brumbaugh's solution will work, it has the downside that everyone's attachment relies on a sling as a single point of failure, and slings are not nearly as robust as the things that we would normally accept as single points of failure, such as ropes, harnesses, and carabiners. If there were any unnoticed damage to one of the slings, someone could be dropped.

An alternative solution is this:

Not the answer you're looking for? Browse other questions tagged climbing rappelling climbing-anchors or ask your own question.

16
Should a carabiner ever be clipped to the tie-in loops and should anything other than a carabiner ever attach to the belay loop?
13
Lowering off from anchors vs. rappelling after a climb?
7
Chaining locking carabiners
17
What happens to rappel anchors?
6
The dangers of simul-rappelling
3
Use of a personal anchor system to rappel (abseil) off a cliff with anchors by the edge and at foot level
3
Redundancy in rappel systems
6
Rappelling using the Munter hitch - stopper knot at the end of the rope?
6
Is it safe to depend only on a prusik?
1
Practice for roped climbing using a tree, is this setup safe?