Where do white tigers live?

We saw this magnificent white tiger in a wildlife rehabilitation center in the United States. I don't like seeing animals out of their natural habitat, but all of these animals were rescued from circuses or zoos, and are not able to be returned to the wild.

Usually these places have signs by the animal enclosures so we can learn about the animals, but I didn't see any information there.

This especially intrigued me because I don't think I've ever seen a white tiger before, even on television.

Where does this breed of tiger usually live? What are some other important facts about it? 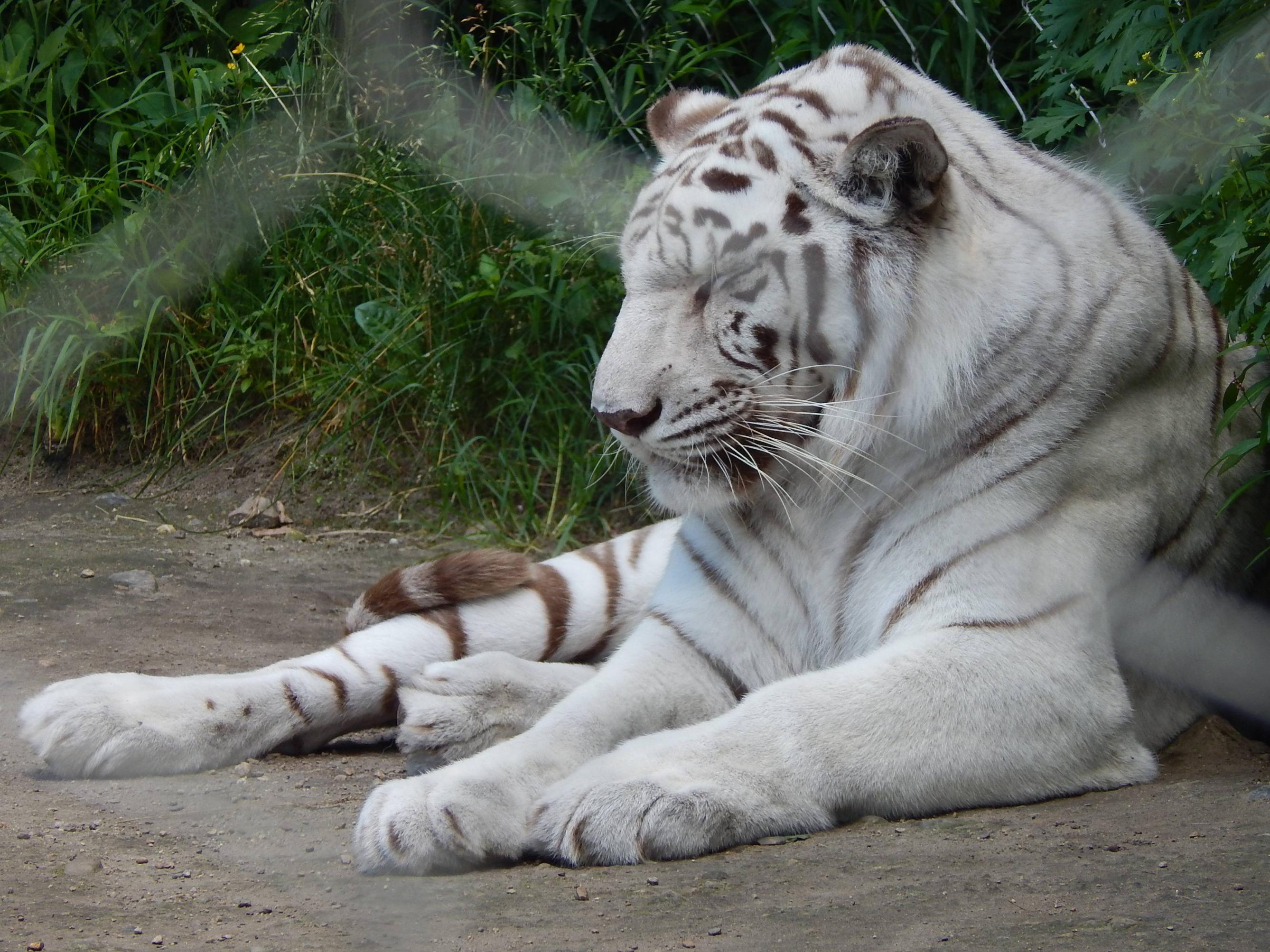 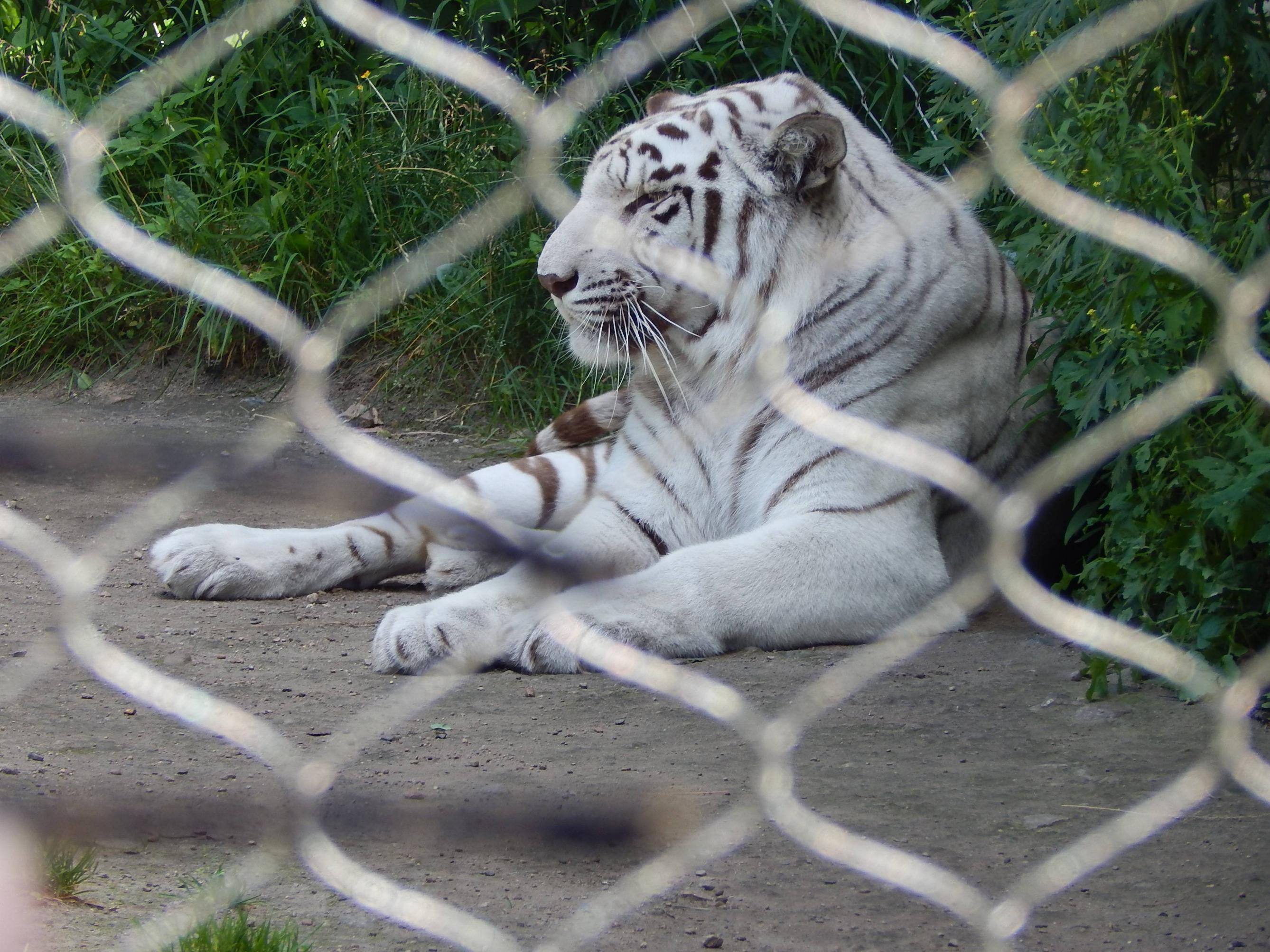 All white tigers live in zoos. The last white tiger living in the wild was shot in 1958. (This breaks my heart.)

White Tiger Classification and Evolution The White Tiger (also known as the White Bengal Tiger) is a subspecies of Tiger, found throughout the Indian subcontinent. Although the range of the White Tiger is historically very large, these animals are incredibly rare as their colouration is dependent on a defective, recessive gene that is passed on from their parents.

A fellow cat-lover sent me an e-mail nearly two months ago about a "pale tiger" that had just been photographed in the wild.

Animal spotted by photographer in jungles of southern India may be the fairest known tiger living outside captivity.

Pale tigers, distinct from white tigers, are thought to have a genetic mutation that results in what biologists call colour morphism. It occurs in environments with large, random mating pools that allow for the varied exchange of genes.

Parvish Pandya, a doctor of zoology, said the birth of a tiger with pale fur was “quite a genetic chance”. He ruled out the possibility the tiger was albino, citing the lack of pinkish hue around its eyes.

Wright, who has spent decades in India tracking tigers, said she recalled only ever seeing one before, in the Ranthambore national park in Rajasthan in the 1980s. “But it wasn’t nearly as pale as this one,” she said.

The last white tiger in the wild was shot in 1958, and though some still live in public and private zoos, many suffer severe health problems due to a lack of genetic mixing.

White tiger you see is not the white tiger subspecies. White tiger are albino Bengal tigers or Siberian tiger just like human have albinism in all races. So of course they are very rare in natural state. The unusual pigmentation and albinism caused disease will make it a lot harder for white tiger to survive. It is a good thing that they don't show it on TV, which I will explain.

The most import reason I am writing this answer is to raise awareness: NOT to love white tiger. Yes, they look magnificent and beautiful. But it is not natural, another example is Liger, just a special breed to satisfy consumers. And to increase the chance of albino occurrence, breeders do inbreeding.

Because of the inbreeding and resulting genetic defects the Association of Zoos and Aquariums barred member zoos from breeding white tigers, white lions and king cheetahs in a white paper adopted by the board of directors in July 2011. It is noteworthy that the first person to speak out against the displaying of white tigers was William G. Conway, General Director of the New York Zoological Society, which later became known as the Wildlife Conservation Society when he said, "White tigers are freaks. It's not the role of a zoo to show two headed calves and white tigers."

The same gene that causes the white coat causes the optic nerve to be wired to the wrong side of the brain, thus all white tigers are cross eyed, even if their eyes look normal. They also often suffer from club feet, cleft palates, spinal deformities and defective organs.

The white coat is a double recessive gene so most of the cubs born through this inbreeding have normal coloring but they too suffer the same defects and are referred to in the trade as “throw away tigers.” As such, they are often killed at birth because only the white tigers are the big money makers. And because none of these cats are purebred (they are all crosses between Bengal tigers and Siberian tigers), they serve no conservation purpose.

Not the answer you're looking for? Browse other questions tagged animals tigers or ask your own question.

6
Dealing with wildlife in the desert of California/Nevada in general and in the White Mountains in particular
6
Where and when can I see the most seals in Cape Cod, Massachusetts?
8
Will a live clam on the beach have a better chance of staying healthy if I put it in the water?
8
Is there a place near Miami, Florida where I can get close to wild animals without leaving my car?
9
Where can we see genetically pure American Bison, including Yellowstone National Park?
11
Why should lights be turned off on beaches where turtles breed?
9
Is Germany or any of Europe really rabies free?
2
Where to find pronghorn sheds?
6
Why is this woodchuck losing its fur?