Why does the Iditarod sled dog race use separate routes in alternating years?

The Iditarod sled dog race is a competition that takes place in Alaska, USA. Each team consists of a musher, who drives the sled, and 16 sled dogs. The race usually starts in Anchorage and ends in Nome. The total mileage is in the vicinity of 1000. Some people like to call it 1049 miles since Alaska was the 49th state, but it's generally somewhat shy of that. Having begun in 1973, the race takes place annually, usually starting in the first week of March.

The Iditarod begins and ends at the same spot every year, but at some point along the way a section of it is split off for a portion of the race. In the even numbered calendar years, it goes on something called the Northern Route. In the odd numbered years, it travels the Southern Route.

I'm intrigued by the different routes, and have a few questions.

The original route of the famous Iditarod Sled Dog Race, which started in 1973, was what is now known as the Northern Route. In 1977 the Iditarod Board of Directors decided to split the route into two sections, and the Southern Route was created. They also felt that alternating routes each year would be the best way to do it.

Both sections of the trail are a part of the Iditarod National Historical Trail which was used in early years for all winter travel. Dog sleds delivered the mail, the preacher, the groceries, and hauled out gold and furs all the way to Anchorage or Fairbanks. During the early years of the Iditarod Race, the mushers only traveled the northern trail. Source

The decision to split the route was made for a few reasons.

The route travels from Anchorage to Nome. It stops in Ophir, a true “ghost town” with a population of zero. Then it splits off into the Northern Route and the Southern Route, meeting back up together at Kaltag.

After Ophir, the Northern Route stops at checkpoints in Cripple, Ruby, Galena and Nulato before getting to Kaltag. The Southern Route, after Ophir, stops in Iditarod, Shageluk, Anvik, Grayling and Eagle Island, and then gets to Kaltag.

This is the official route map. A list of checkpoints and distances between them can be found here. 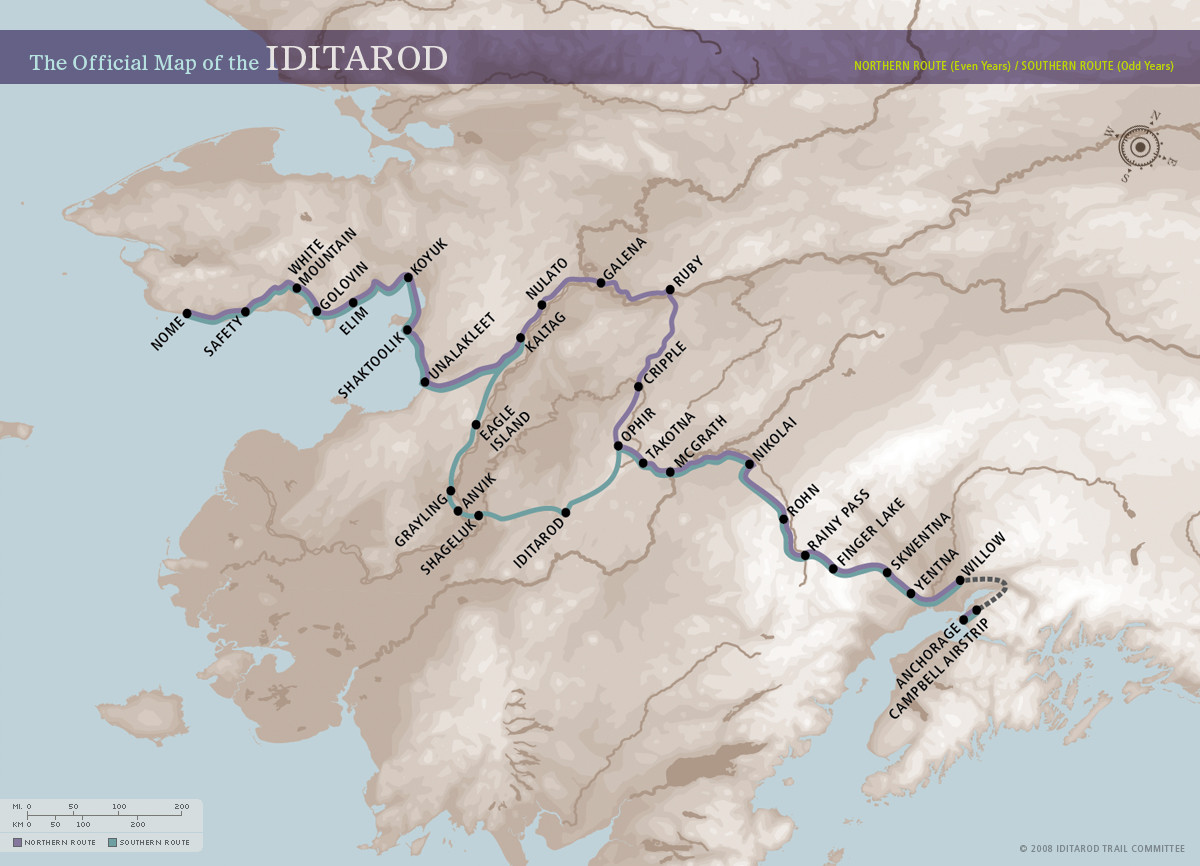 It's worth noting that weather and other things cause changes to the exact route. There have been numerous times when, in order to make sure the race took place during the appointed week, changes have been made. Global warming in general has been blamed for some of the more recent changes. For instance, in 2017, the weather was so warm that it was not safe to use certain parts of the trail due to lack of sufficient snow. Therefore, the course was altered. More information, including the course for that year, can be found at The Alaska Life.

Sources for information in this answer include
Iditarod, the Last Great Race
SBNATION
Iditarod EDU
The Alaska Life

Not the answer you're looking for? Browse other questions tagged united-states trails dogs alaska or ask your own question.