Is this rock I found on the Toiyabe Crest Trail an arrowhead?

I found this arrowhead-shaped rock on the Toiyabe Crest trail in Nevada, USA. I'm wondering if it actually is an arrowhead. It's about 1.5 inches long. 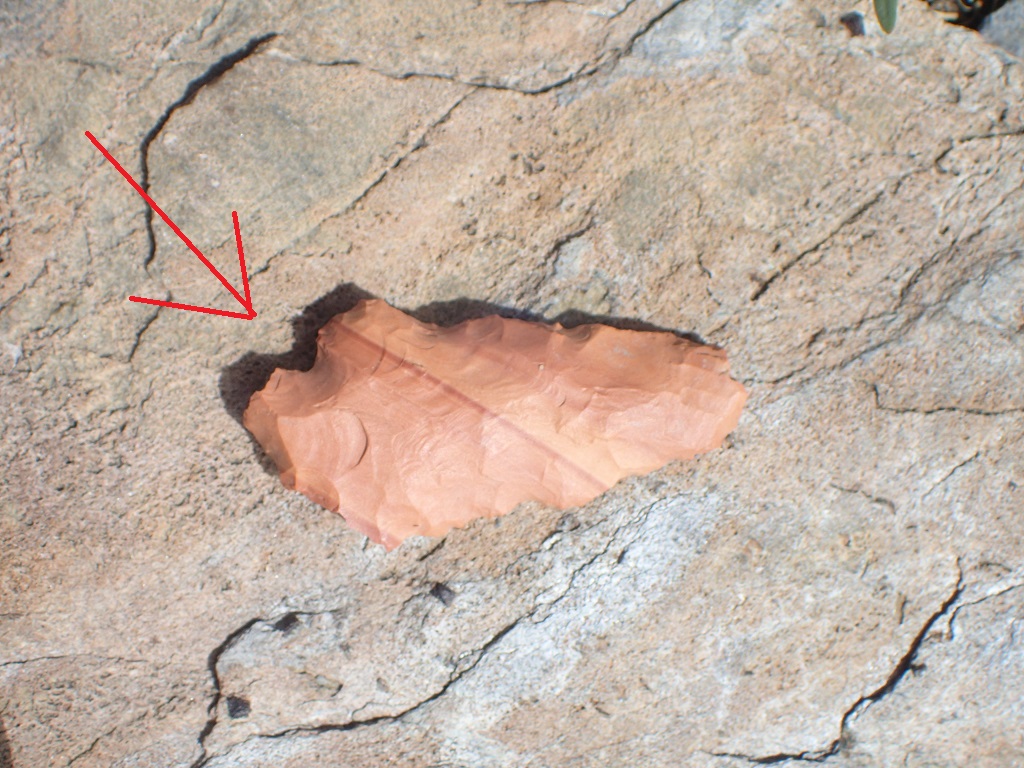 The reasons that I think it could be is that it's about the right shape and the edges looked like it had been sharpened. It also has what looks like a notch on one side (pointed to with the red arrow). It was also of a different kind of rock than everything else in the immediate area.

Could it be an arrowhead?

Yes, that looks like arrow heads I've found in that general area too. Note that it may be a unfinished or discarded piece.

There is clear flaking and shaping. It would be very very unlikely for this to have happened by natural causes.

I don't honestly know what an arrowhead looks like, especially not well enough to make a definitive identification. However, I found two references that at least confirm a possibility that arrowheads may exist on the Toiyabe Crest Trail. Since you asked "could it be an arrowhead," I hope this might be helpful. There aren't any pictures in either of them, so I don't have anything to compare with what you found, but I think reading these two accounts could be interesting.

Austin Nevada Wilderness Areas has some good information about the Toiyabe Crest Trail, which is the longest maintained trail in Nevada. The website gives general information, including a good list of things you might see while traveling there. The area is rich with a diverse array of animals, birds and fish.

The Toiyabe Range is also diverse in geologic finds. Plutonic, volcanic and sedimentary rocks are all present. Keen eyes will spot plant and animal fossils as well as an occasional arrowhead. Rockhounds will also find treasures in the variety of specimens.

My second account is from "Backpacking in the Arc Dome Wilderness" published online at The Path Less Beaten. I know you've made the trip, but for others who are interested, this is a very long, detailed, report written by a man who made the arduous journey with his dogs.

They were out for many days, and after one of their final nights in the wilderness, he writes this:

The dogs enjoyed a leisurely morning sunning themselves as I made breakfast and started packing up. After I rolled up the tent, I found that I had been sleeping on top of an arrowhead the whole time. It looked to be made of flint, and had the tip broken off. It was kind of neat to think that this spot had been used for camping for hundreds of years.

Not the answer you're looking for? Browse other questions tagged united-states history manmade-object-identification or ask your own question.

6
What is the history of the Duckbill rock formation in Oregon?
6
Found in a river in north Georgia USA. What type of rock is this?
3
What is the estimated cost for through hiking the Pacific Crest Trail?
4
What type of lizard is this grey and orange one I found near the Grand Canyon?
7
What is this square plastic thing with small black flat glass marbles in the Uintas?
5
What is this plastic net with a wide middle and bottom that looks like an upside-down flower hanging from a tree?
3
What is this metal plate at the top of Mount Hoffman?