What is a tent skirt and what is its purpose?

Several posts on this side make mention of tent "skirts". For example:

I found some for sale here, but without a picture. Google Images appears to show tents with an extra flap at the rainfly, but the rain would have to be extremely horizontal for rain to hit the inner tent that way. Is it for single roof tents?

You pretty much answer your own question.

Snow skirts are primarily used on 4 season tents designed for high altitude or arctic conditions. The idea is that you pile snow on the skirt to seal the perimeter and prevent the entry of wind-driven snow. The skirt can also help anchor the tent and reduce flapping in extreme winds. 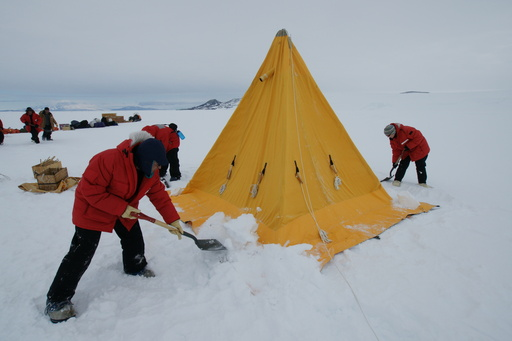 However skirts add weight and reduce ventilation options in good weather, so in modern designs they are frequently omitted. For example Hilleberg tents, which are widely used in arctic conditions, do not come with skirts as standard. Instead, the fly is designed to hug the ground and the user would simply create a wall of snow around the hem. 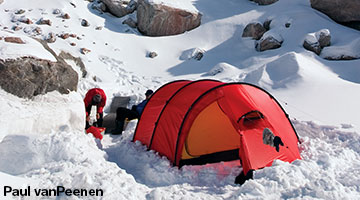 Less commonly skirts are used in summer, when they are referred to as "sod skirts". You pile dirt on the skirt to keep out wind, dust, sand, insects, snakes and vermin. This technique is mainly used in floorless tents as the skirt is pretty much redundant if you have a sewn-in groundsheet.

Not the answer you're looking for? Browse other questions tagged tents terminology or ask your own question.

6
What could be the cause of condensation on the tent floor?
13
Is a mountaineering tent necessary for backpacking Iceland?
7
Are there 1-person 4-season tents?

11
Is it normal for a double skin popup tent to leak in slight rain?
13
What is a “fast pack” setup for a tent?
25
Does touching the tent outer wall from the inside make it leak?
13
Is a mountaineering tent necessary for backpacking Iceland?
6
What could be the cause of condensation on the tent floor?
9
What is the defintion of a “unisex tent”?
8
Would a lightweight 2-person tent or medium weight 3-person tent be better for near freezing weather?
9
Tent in the rain
12
Why aren't (poly-)cotton tents more popular?