Is there any evidence that attaching a biner to both seat and leg loops results in a 3-way load?

It is commonly known that loading your carabiner in three directions is bad, as it reduces it's strength. This is apparent when talking about belay stations, as e.g. described in this blog post by the American Alpine Institute. The same danger is often associated with attaching a carabiner to both the seat and leg loops of a harness as opposed to just the belay loop. I haven't yet seen any evidence supporting or refuting this. By evidence I mean something like an accident report or actual tests done.

My personal hypothesis is that this is not problematic. I am just stating this as a reasoning for asking for evidence. I do not claim that this hypothesis is correct, as equally I haven't done or read any tests validating it. These two loops are close together in the first place and their position is not fixed, they are only tightly wrapped around body parts, which themselves aren't rigid either. Therefore I believe that under load they will be pulled close together and away from the body, such applying an effective single force to the biner.

Also, this is not about any other dis-/advantages except this particular safety issue. I know people who use it, which reason enough to ask this question. 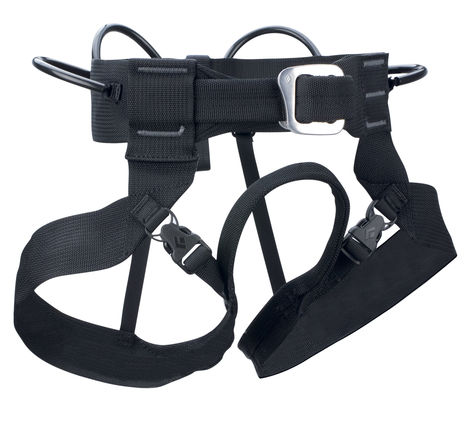 as you will notice, there is no belay loop at all. This is how the directions show one belaying with it. 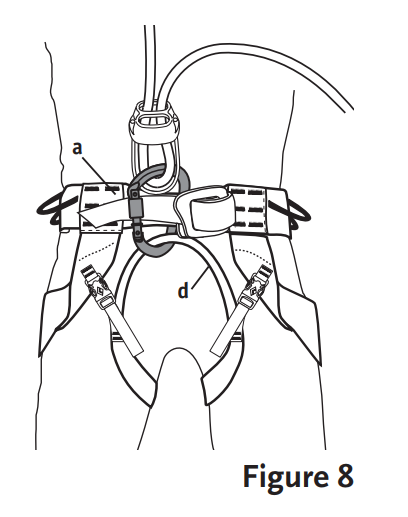 However, this type of harness is designed to be used this way, most other harnesses are not.

For data on how hard it would be to break a tri-axial loaded crabiner consider that Black Diamond was able to break one at 17 KN. For comparison,

As far as other evidence that would show that clipping to both loops can cause the carabiner to fail, I am unaware of any studies. However, there were/are a good number of climbers clipped to both, even with harnesses that had a belay loop, especially after the death of Todd Skinner whose worn belay loop failed.

I don't know of any instances where people have died because a carabiner used to belay someone failed due to cross-loading. I think that if such an event were to become known, people would be pointing to it as a reason to use the belay loop to belay.

The other reason to clip to both loops, is that it will make it much harder to belay in the PBUS style, as a belay device such as an ATC will be oriented horizontally instead of vertically.

All harness manufacturers instruct users to put carabiners through the belay loop and not the tie-in points.

Petzl has it in their manual: 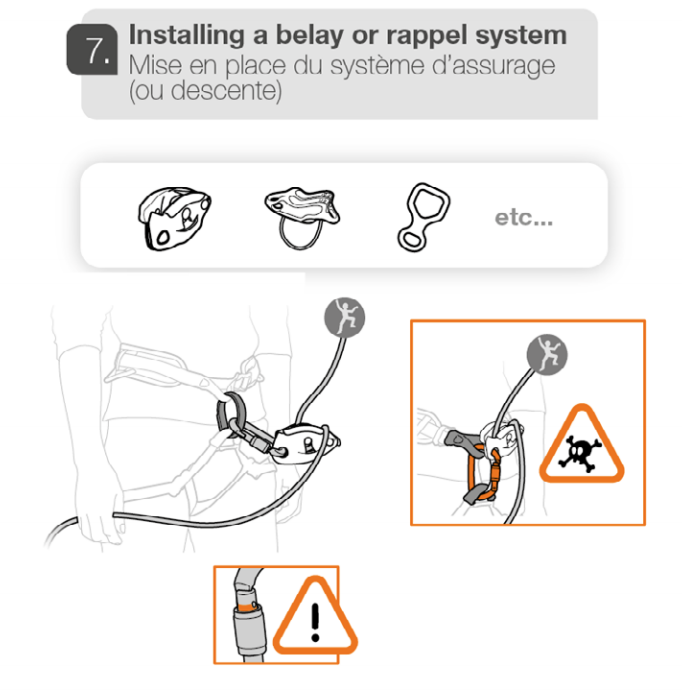 Black Diamond's Director of Global Quality Kolin Powick (who does much of their gear testing) has this to say:

“You should only ever have a carabiner through your belay loop,” he says. Belay loops keep everything properly oriented, and make it easy for you to visually inspect the system. “If you instead clip the belay carabiner through your harness tie-in points,” says Powick, “then everything is rotated to an inappropriate, non-ergonomic angle, which makes belaying awkward and can cause triaxial loading, where a carabiner is pulled in three directions … not good.”

I can only agree with the previous answers that clipping into the tie in points just increases the risk of the carabiner not being loaded as designed.

And there have been accidents of carabiners not being loaded as designed and I found a source that mentions such a failure that involved cliping into two tie in points.

At the start of an abseil, when the rope is more horizontal than vertical, depending on the orientation of the karabiner, this can allow the FoE to apply a large force to the gate of the karabiner, and lever it open [...]

In the second one something similar happended, but with the carabiner clipped into the belay loop.

You can easily do this experiment yourself. Attach a carabiner to both leg and waist loops. Tie the biner to a rope or use a sling and hang from a branch or anchor. Observe how the biner is loaded. Depending on your individual harness, body and carabiner, there will be some degree of triaxial load ie the alignment of forces on the biner will not be optimal with regard to how it is designed.

Carabiners are not rated for triaxal load, only for closed gate load, open gate load and minor axis (across the gate) load. It is not, however, likely that they will perform significantly worse with any triaxial load than with minor axis or open gate load. That is the carabiner will, worst case, hold about 7kN. There is no way you'll sumbit a biner at your harness to such forces without doing something very very wrong. Note also that some harnesses don't have a belay loop. (And older models didn't have none) For those harnesses you'll simply have to attach a belay biner to both loops.

Just because a non-optimal practice won't kill you doesn't mean it's a good idea. Belay loops were added for a reason. Manufacturers and climbers around you will assume and expect that you use your gear as intended. Don't do things differently unless you have a very good reason.

16
Should a carabiner ever be clipped to the tie-in loops and should anything other than a carabiner ever attach to the belay loop?
15
Toproping with two ropes joined by a double fisherman's
3
Using Gri Gri 2's Carabiner with Another Belay Device?
5
Is there any statistical evidence that hunting reduces the likelihood of mountain lion attacks?
1
Is there any evidence that black bears (or other large predators) are indifferent to, or acutally repulsed by, the scent of humans?