A few weeks ago, I strapped a target onto a tree that was about 1.5-2' in diameter to sight my muzzleloader on private property. I fired about a dozen .50 cal bullets into the tree.

In addition to liking firearms and hunting, I also happen to be a so called "treehugger". Shooting a tree ain't exactly hugging so my question is, how bad is firing bullets into it? For example, how much damage did I inflict on the tree in the example above? Will the tree die? Will it recover? How many rounds can an average tree take?

Tree can die of lead poisoning from bullets,

On the morning of July 3, Confederate forces launched the second of two attacks on Union troops occupying Culp's Hill. The Rebels, though, were ultimately repelled - after seven hours of fighting - largely due to an artillery bombardment from Union forces perched on Powers Hill. Soon after the battle, Culp's Hill became a popular picnic area for tourists who were intrigued by the bullet-riddled trees. Few of these trees survive today, though. Historians say most literally died from lead poisoning.

and here is what the Forest Service has to say about it,

Use approved targets along with a safe, ”bullet-proof” backstop. Do not to attach your targets to vegetation or structures, such as; trees, log decks, slash piles, fences, or water tanks.

By puncturing the cambium of the tree with bullets you are on the way to girdling it. Girdling a tree happens when enough of the circumference of the tree has been damaged just beneath the bark so as to interrupt water and nutrient flow, effectively strangling the tree. This is a slow death. In most cases small punctures and bark damage can be healed over by healthy trees, but larger openings increase stress and risk of infection for the tree, reducing its chances of survival.

Depending on what you're adding to the environment when firing off each round, you could be exposing the tree and its neighbors to toxins like heavy metals. Unless you're shooting a lot and at the same spot I don't think there would be very much buildup, but there is not a clear threshold as to what is acceptable and what is not. How poisonous something is generally depends on dose and the digester.

On the one hand you can be pretty confident adding plastic and brass shells and casings, along with metal fragments, into the area and trees themselves will not help life there. Plants are not deficient in those kind of nutrients, so even a little is probably not a good thing. On the other hand, sport shooting is an outdoor sport, and the time you spend outside can go in tandem with stewardship of the area. These two things - sport shooting and stewarding the area you enjoy sporting in - are orthogonal to each other in that one doesn't rely on the other. Our relationships with the woods are complex.

Also, on note of our relationships with the woods: keep in mind sawmills don't want trees with bullets in them as it can damage their saws. So if there is forestry done in an area, be mindful of that and try not to shoot the trees! I'd say same goes in a maple syrup tapping area.

Lastly, as a firearms safety measure, it is a good idea not to shoot into trees and instead pick a bulletproof backstop. For example a dirt mound larger than your target area is much safer than a tree, because you can be more confident your accurate or stray bullets will not go beyond the area you're observing and aiming at. Shooting at a tree, a bullet can easily miss the tree - are you paying attention to what's beyond it? Also, after enough shots, eventually your bullets will start going through the tree - can you see what's behind it?

TL;DR: My suggestion would be: Research the materials you're adding to your local environment, where they come from and what happens to them over time. Follow your gut, heck even ask the forest and see what your intuition tells you. And of course, stay within the bounds of smart firearm safety, which I think draws the line in this case and demands that you setup a more short-term failsafe target.

I searched for any scientific evidence that lead from bullets harm trees. I could not find any harm from the lead (other then the obvious physical trauma). You probably would not want to eat the tree, but there is no evidence that lead in moderate or even heavy amounts will cause to the tree to die, or live a substandard life.

Trees can survive for long periods with a few bullets in them.

Last week, park officials found a new one — although fallen — with two bullets still embedded in its trunk 148 years later.

“The real witnesses to the battle . . . are still here,” John Heiser, Gettysburg National Military Park historian, said Tuesday, “even though they can’t talk to us. . . . They’re the last living witnesses to this singular event.”

Maintenance employees found the bullets in an old oak tree that had toppled on Culp’s Hill, southeast of town, the site of bitter fighting between Union and Confederate forces on July 2 and 3, 1863.

The discovery was made Aug. 4 as employees cut into the fallen oak tree, and their chain saw struck the bullets. The park said the tree fell about three or four years ago. The bullets were about 13 feet up from the roots, and the part of the tree where the projectiles were found was about 27 inches in diameter. Washington Post; Gettysburg battle bullets found embedded in tree By Michael E. Ruane August 9, 2011

There might even be a bullet in the 2x4 your house is made from. We can see from the image below a bullet does not appear to harm the growth near the injury site any more than knot or broken branch would. 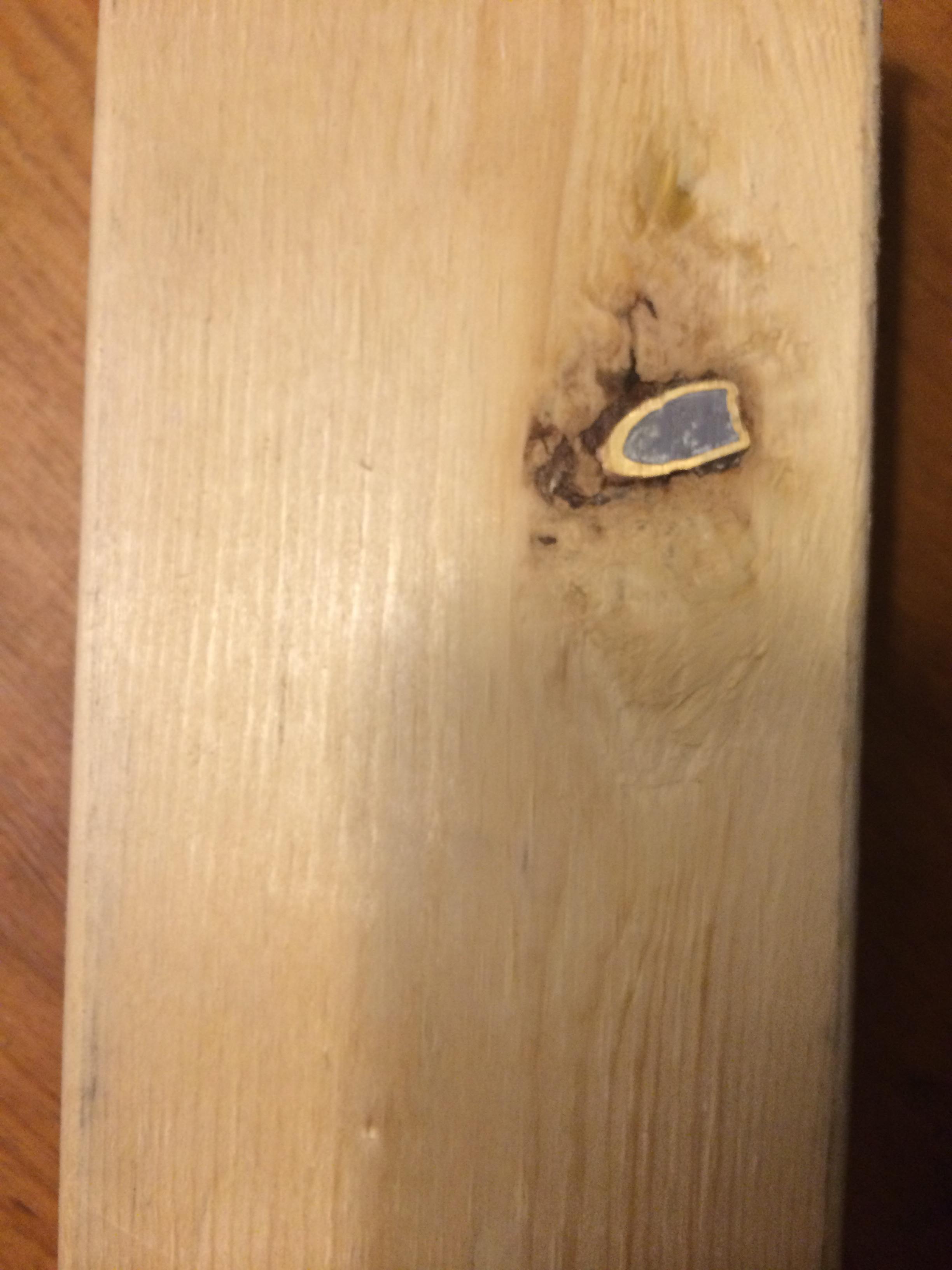 Plants can and do absorb lead, thought it seems it is more significantly absorbed from air then earth.

Riihling and Tyler (1968) grew plants from roadside seed in contaminated soils obtained near highways. The plants contained only 5-10 ppm lead in the dry weight of the plant, whereas the same species of weeds that grew in the same soils along the roadside contained 68-950 ppm lead in the dry weight of washed samples. These data indicate absorption of lead from the atmosphere. Lead in the Environment: Tom Gray Lovering U.S. Government Printing Office, 1976 (pg 69

But lead does not travel through the tree to any great degree.

A solution of lead arsenate was formerly widely used in orchard to control pests... However a study of uptake of arsenic and lead by apple and apricot trees growing in such soil has found that though uptake occurs neither metal reaches levels which are danger to consumer health. Metal Contamination of Food: Conor Reilly John Wiley & Sons, Apr 15, 2008 (pg45)

Trees exposed to metric tons of lead, do absorb some, but no indications of harm to the trees from it.

The researchers'' survey found 11 metric tons of shot in the shotgun range and 12 metric tons of lead bullets in the rifle range. "These ranges are 10 years old. Most of the lead shot has accumulated on about four or five acres. Some shots have been into the woods, which cover hundreds of acres," Rimstidt said.

However some lead escapes, he said. "But we learned that it is absorbed in the top few inches of soil and does not migrate beyond that," Rimstidt said. "Lead is not very mobile. It does not wash away in surface or ground water."

Another finding is that there are large amounts of lead in the trees near the shooting range – but not in a large percentage of the trees, Rimstidt said. "If and when those trees are harvested, they would be contaminated with lead "Science Daily:Do Lead Bullets Continue To Be A Hazard After They Land?, Source Virginia Tech November 5, 2004

Trees can be injured by trauma, same as a person. An occasional euphemism is to say someone died of lead poisoning when shot and this may be what is meant by phrase quoted in another answer "Few of these trees survive today, though. Historians say most literally died from lead poisoning."

There is no doubt that lead in animal carcass is harmful for scavengers. (Not strongly related to points above but worthy of mention)

Most lead-core rifle bullets fragment into hundreds of tiny pieces when they strike animal tissue. Lead-tainted meat may become part of scavengers' food supplies when any of the following occur: a wounded animal escapes a hunting attempt, an animal shot as a pest is not retrieved from the field, or when gutpiles remain on the landscape after a hunt. Over the past 3 decades, California condor recovery efforts have brought to light how this lead pathway in the ecosystem can threaten even the very survival of a species.But as you will see, impacts extend to many other wildlife species also. National Park Service: Lead Bullet Risks for Wildlife & Humans

As a general rule I don't think you should fire .50 cal rifle rounds at any object you'd like to keep intact. They tend to be rather destructive.

As for exactly how bad it was, try inspecting the tree. Did the shots go through a solid target first, or was this a paper target/did they miss the target? What can you see when shining a flaslight into the entry point? Do you see any exit points? Are they small and bullet shaped in a straight line from the entry point, or are there chunks of tree missing?

It's a big tree though, it can soak some damage. I first read that as a 2 inch tree, I was kind of surprised it still looked like it would survive. If you want us to be able to analyse better, send pictures of the situation please.

Not the answer you're looking for? Browse other questions tagged trees guns or ask your own question.

22
How to attach signs to trees considering tree growth?
14
Rappelling from tree
5
How exactly do you cut down a tree with fire?
8
What causes a tree to split into multiple trunks?
6
How does a tree with such an extreme curvature form?
14
Escaping tree well
1
In shooting, what is a MOA (minute of angle)?
6
When to plant a potted live Christmas tree?
10
What does it mean for a caliber to be flat shooting?
0
What is this type of tree?