Is it normal for a double skin popup tent to leak in slight rain?

About a year ago I was given a three person dual skin popup tent. Almost new but possibly a factory second.

(It's made by "Vango" and I think it could be a "reject" because one of the four guy ropes is not attached to the tent and looks like it didn't get ripped off but was never attached.)

Anyway it's a great tent and I have used it on a grassy area, properly pegged, in reasonably solid rain with 3 people and luggage with minimal wetness.

But now I'm camping wild at the beach and water has made it into the tent twice, always from one of the corners.

When I first set it up on the beach instead of trying to use the pegs I weighed it down with rocks inside between the inner and outer skins. (The standard pegs are not heavy duty enough for dry sand and windy conditions and I was too lazy to use sand-filled plastic bottles instead of pegs.)

Another factor is the sand was on a bit of a slope so I dug down a bit at the back and used that sand to build up the front, thus making the area flat but the rear is a bit like a trench and also it's not a perfect fit for the tent. Some corners are a bit outside the flat part and the rocks between the skins could slide down a bit, especially when there's some rain, wind, or both.

When I added the tent pegs and guy ropes after the first storm, because they weren't very deep, I dug down a little so the pegs would hold better, put a rock on top to weigh them down, and covered them with a pile of packed sand. In some places I may have heaped a bit of sand over the lower edge of the tent wall too.

Are there some general "dos and don'ts" for setting up a dual skin tents or popup tents or tents on sloping sand?

I'm not familiar with your specific tent, but you typically don't block ventilation in a double walled tent. The outer rain fly will collect condensation from your own breathing and the tent needs to breath to reduce it.

You also need to seal the seams on a tent if the factory doesn't do it for you, and sometimes even when they do. You can find lots of products for this, including McNett Seam Grip (no affiliation): 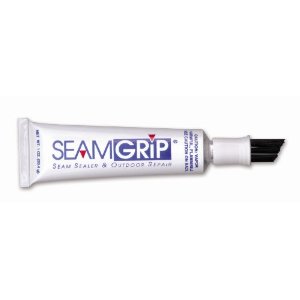 There is one thing about tents in general (well, at least I don't know any exception) - they are absolutely not waterproof!. The outer part simply soaks with water and leads it down to the ground. But if you touch it - you have a rain inside. It's just like touching the surface of the umbrella from the below.

So there is one thing you must take very seriously when preparing for rain in tent - the outer and inner layer of the tent must not touch!. If you have one-layer tent, nothing can touch the outer layer as well! A tent is actually just a big umbrella.

By 2-layer tents you should make the inner layer possibly loose, while the outer layer should be tight.

Sand will be an inherently trickier environment to camp in successfully I would imagine, since it retains moisture well and isn't as solid as earth.

Personally I've never camped in sand, but I would imagine even a bit of sand piled on the tent walls could be the cause, that would be the first thing I'd try to eliminate. If the sand is moist (or becomes moist) then you have in effect a wet solid pressing against the tent, in which case water could be very likely to make its way through in small quantities.

Popup tents are also known as 'festival' tents, and are frequently regarded as single-use disposable items!

Most Vango tents are at the cheaper end of the price scale - They aren't all bad (my first proper camping experiences in the UK were in a Vango tent), but the 'popup' end of the market is where corners are most likely to be cut on materials and workmanship.

Not the answer you're looking for? Browse other questions tagged camping tents beach rain or ask your own question.

9
Tent in the rain

18
How do I use these "guy line runners" to adjust the tension on my tent's lines?
10
How water proof are these kinds of tents?
12
Canvas vs Nylon Tent for Car Camping
35
Pitching a tent in the rain?
8
is it a good idea to cover a tent with a tarp to protect for heavy rainfall?
14
Is a mountaineering tent necessary for backpacking Iceland?
6
What makes some beaches better spots for beachcombers than others?
8
What is a tent skirt and what is its purpose?
9
Tent in the rain
2
Inner tent - Vango F10 Xenon UL 2