Are statistics about the frequency of crime actually useful in determining how safe a trail is?

We have a question here about how common assaults/crime happen to people hiking the Appalachian Trail which I have answered with basically all of the statistics I could find.

See this XKCD that illustrates quite well what I am talking about. 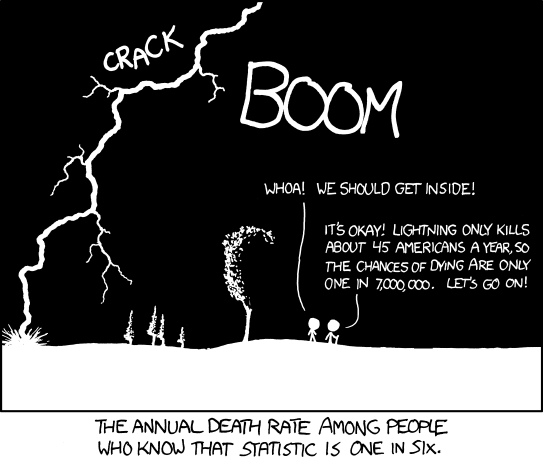 While the overall deaths are low being above treeline or in open fields greatly increases your risk (Roy Sullivan was struck by lightning 7 times).

The other thing is that for example just because there were 3 rappel failures out of 43631 climbers in a study(Source) that doesn't seem to mean that rappelling is safe (people die rappelling) but rather that most climbers take the appropriate precautions and do it safely.

Would the statistics of how frequent crime happens(if comprehensive and accurate) be an indicator of how safe a trail is?

Statistics is sometimes referred to as the study of decision making in the face of uncertainty. The XKCD comic is funny because the character is relying on a hopelessly broad statistic when there is actually a lot of relevant information staring them right in the face, which should obviously change their evaluation of the hazard.

Are generic crime statistics useful in evaluating the danger of a trail? That depends on how much uncertainty you face in your decision. If you know that your trailhead is the site of the annual camping trip and drunken revel of the local "Outlaw" motorcycle club, which resulted in 10 reports of assault last year, then you face a lot less uncertainty in your decision then just knowing that a particular trailhead was the site of 12 crimes over the course of a year. If you have no other information about specific hazards, then the generic statistics are all you have to go on, and they may be better than nothing.

Of course there is an additional factor in that people tend to be very irrational about assessing relative risk. Crime in the US is actually relatively rare, and driving is ubiquitous, so folks obsess about the danger of being assaulted on the trail, while being totally comfortable with driving to the trailhead, even though the probability of being in a serious motor vehicle accident is much higher then the probability of being assaulted on the trail.

The total number of incidents, even over a defined period of time, is meaningless by itself. There is no absolute scale for danger. What we really want to know is how dangerous one thing is relative to another, with the second being something familiar that we have some intuitive sense about.

Let's say you had absolutely accurate statistics that there were 100 crimes on the Red Trail. So what? Is that high, low, normal? You can't tell from this alone whether you should consider it dangerous to take the Red Trail.

The Blue Trail had only 50 crimes. But does that make it safer? Is the same time period being compared? How many people went on each trail? How long did they stay on each trail?

What was the nature of the crimes? If 10 of the crimes on the Blue Trail where stabbings, but 97 out of 100 on the Red Trail were theft of unattended items, does that change your mind which trail you'd rather take?

Even if you knew all these things, that still doesn't put either trail in perspective so that you can relate its safety with ordinary circumstances. In roughly April of 2017, there were 61 shootings in New York City. Does that mean you're safer on the Red Trail than walking the streets of NYC? Maybe, but you need a lot more info to draw any conclusions. How many of these shootings were on the street of people walking around? You plan on doing only day hikes on the Red Trail. How many of the 100 crimes were during the day? How many of the NYC shootings were during the day? It's really hard to get a apples to apples comparison.

Also beware of anecdotal evidence. People tend to remember and report unusual incidents more than the ordinary. Your cousin's friend's sister tells of this creepy-looking guy following her on the Red Trail. However, there were probably far more creepy-looking guys going the same way as her last time she walked around NYC. She doesn't tell stories of those since people going the same way walking behind you in NYC is a expected occurrence.

In neither of these cases anything bad actually happened. So not only is there strong reporting bias, it's not clear there is anything to report. The one creepy-looking guy on the Red Trail might have just been there by random chance with no ill intent. However, two of the many people that happened to be walking behind her in NYC might have been thinking how to maneuver themselves to snatch her purse, but didn't get a chance to pull it off.

Basically, without a lot of detailed information, most of these statistics mean very little. And, those details are either just not available, or would be a huge amount of work to gather.

I revisited this question while tracking down something else. (I'm not sure how I got here when I was looking at your recent caterpillar question, but mysterious are the ways of the moving finger on the keyboard.)

Would the statistics of how frequent crime happens (if comprehensive and accurate) be an indicator of how safe a trail is?

And you also say:

Comprehensive and accurate crime statistics would certainly be an indicator of how safe a trail is, particularly if the statistics were per person-unit-of-time hiked. (If you don't have that denominator to your statistics, you might conclude a trail was very safe because almost no crime occurred on it. But it could be a trail that has almost no hikers but most of them are killed by the resident serial murderer.

Assuming you have good statistics in terms of crimes per person-hour hiked, then there would probably also be a record of the nature of every crime and every victim. This would be similar to the actual statistics on motor vehicle fatalities.

Now it is not politically correct to blame the victims, but if the crimes on Trail X are predominantly burglaries, then you are dumb if you are not particularly careful with your stuff. If there are rapes on Trail Y, keep away from Trail Y, or go with a group, if you are not a female Bruce Lee.

Just as knowing how and when and why serious traffic accidents occur helps you avoid being killed or injured in or by a car (don't drive when drunk or with a drunk driver, fasten your seat belt, don't drive while exhausted, look both ways before crossing the street) so knowing what crimes are committed on which trails will keep you safer than the average.

You can better your chances in many (not all) aspects of life by knowing the statistics, but eventually something will get you no matter how careful and aware you are.

So the answer to your question is yes and no. Yes, the statistics are an indicator. No you can't judge how safe a trail except "on average." So don't be average.

Not the answer you're looking for? Browse other questions tagged hiking safety or ask your own question.

12
Relative risks of various outdoor activities?
14
Is there statistical backing for asserting the wilderness is safer than the highway?
7
Frequency of crime/assault on the Appalachian Trail
4
How should regular Appalachian Trail hikers interpret this weekend's attack?

17
What are the critical dimensions to a safe bear-bag?
24
How safe is the bowline knot in different situations?
5
Is it safe to cook food during a hike (on trail) when bears are possibly around?
13
How safe are stoppers/rocks when threaded through rock tunnels?
9
Are nuts and cams less safe if the rock is wet?
7
What are the best possible ways of indicating a 'closed' trail?
7
Frequency of crime/assault on the Appalachian Trail
9
Is it generally safe to hike a pass in a thunderstorm?
12
Relative risks of various outdoor activities?
1
Are there any outdoorsy hikes accessible from the T in the Boston area, preferably (but not necessarily) actually in Boston or Cambridge