What kind salamander is this black and grey one I found at around 11,000 feet near Mt Ritter in the Sierras?

I was making the last of my approach to Mt Ritter when I saw this salamander. 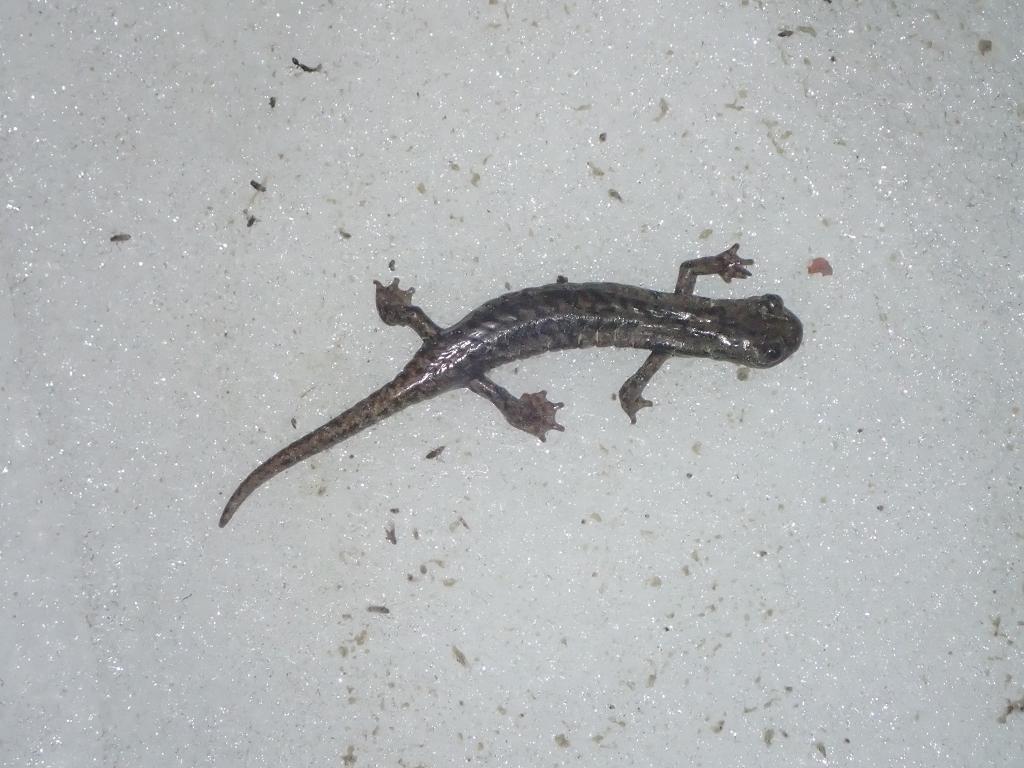 It was probably 3-4 inches long and around 4:30 in the morning, I think the forecasted temperature was around 40° Fahrenheit.

Would anyone know what kind of salamander this is?

I think this is most likely a Mt. Lyell Salamander. Hydromantes platycephalus. That page has excellent pictures of both the salamanders and the mountains on which you'll find them.

The basic descriptions I've found from a number of sources match yours in terms of coloration, although at certain life stages parts of them can be tinged with yellow or silver. They have that dark mottled pattern, and a tail that looks like stone. They also have webbed feet with the correct amount of toes, which is four on the front and five on the back. Other salamanders in the same species have different numbers of toes.

This species of Hydromantes has a flattened head and body, as the name--platy (flat)-cephalus (referring to the head)--suggests; blunt snout; short, blunt tail and a pedicelled, mushroom-shaped tongue (Stebbins 1951). There are 4 blunt-tipped, partly webbed toes on the front feet, and 5 on the hind feet. Adults reach about 120 mm (4.72 inches) total length, and usually have 12-13 costal grooves. Males are usually longer than females and have wider heads (Adams 1942).

Color: Dark chocolate to blackish above, with mottled pale gray to pinkish patches composed of whitish flecks; in some individuals, mottling completely obscures dark ground color; the dorsal coloration tends to match the color and pattern of granite rock common in this salamander's habitat, and varies among populations as substrate color varies. Ventral color is sooty to blackish often broken by irregular clusters of silvery chromophores, especially beneath limbs, on gular region, and on sides of belly. Juveniles: Completely dark brown to black with scattered golden stippling, or clusters of pale yellow chromophores dorsally.

The Mt. Lyell is one of the few varieties of salamander in California that are indigenous to the Sierra Nevada Mountain Range. Almost all other California salamanders are in the Western part of the state, and even at the Pacific coastal region.

Adult Habitat: Favored habitats are downslope from melting snowfields, which persist long into or even through the summer in the high Sierra Nevada. Individuals also are encountered under rocks at the edge of streams; at low elevations, they may be found in direct contact with moist soil under rocks or occasionally under pieces of wood. Salamanders also are found under moss on wet rock faces (e.g., in Yosemite Valley). Source

Another thing that makes me feel fairly confident in this identification is the outside temperature of 40°. Also, that you saw it at night, as it's generally nocturnal.

This species is nocturnal and cold tolerant down to 35 degrees F. (2.0 C). Surface activity is from late April to early September. Mt. Lyell Salamanders probably move into below-ground microhabitats and remain inactive during winter freezes and summer droughts, but they remain active underground during the summer. Source

It looks like you left that one where you found it, which is always important with anything we come across outside. Also, it's unlawful to take or own one in California because it's protected.

Conservation: Mt. Lyell salamanders enjoy protected status and appear to be in good condition. Much of their range is in National Parks and Wilderness Areas, so there are few threats from human activities, although road construction in the Sonora Pass region could harm excellent habitat, that occurs near roadside. They are protected as a species of Special Concern by the California Department of Fish and Game and may not be taken or possessed at any time. Source

The map on this page is marked with dots representing actual sightings, each with specific details as to where and when. Many are in the exact area where you were hiking.

12
What breed is this very large, black, turtle/tortoise found in the Northeast United States?
28
What animal could strip all the bark off the lower 7 feet of this tree?
7
What kind of animal may have done this?
11
Why was I attacked by a bird (twice)?
19
What is this blob found at the edge of a puddle on a forest logging road?
4
What type of lizard is this grey and orange one I found near the Grand Canyon?
2
What kind of toad is this 2.5 inch (6.5cm) one yellow with brown spots and a white back stripe?
3
What is this lizard-like thing?
9
Is this a baby bat and what should I have done?
1
What kind of owl is this?