How do you determine the optimum time to tack?

In one of the Hornblower novels, he is being pursued by a French frigate on the first day of war.

During the chase, both the British and French ships are sailing upwind, and it is mentioned that the theoretically correct moment to tack is passing.

Once settled on the new tack the Loire’s natural advantages asserted themselves once more. She showed her extra speed and extra weatherliness; she drew up again from Hotspur’s quarter to her beam; then she could luff up briefly and gain a little more to windward on the Hotspur. The minutes passed like seconds, an hour like a minute, as the Hotspur plunged along, with every man braced on the heeling deck and the wind shrieking.

“Time to go about again, sir?” asked Bush, tentatively and greatly daring, but the theoretically correct moment was passing.

The French captain was no fool, evidently. He had observed the Hotspur delaying past the best moment for tacking, he had seen the squall engulfing her, and had anticipated her action. He must have tacked at the very same moment. In consequence he had lost little while tacking, and that little had been regained by the time the two ships were in sight of each other once more.

Hornblower and the Hotspur

How exactly does one determine the best time to tack when optimizing for speed?

There rarely ever is a theoretically optimal time to tack that can be described in the abstract, as there are so many unknown, random variables. The best time to tack, for pure speed, is never. But never isn't a practical answer, as you usually have an ultimate destination or things to avoid, and the wind isn't constant, so you have to weigh your current course against those things, and so it usually boils down to experienced judgement and gut feeling. 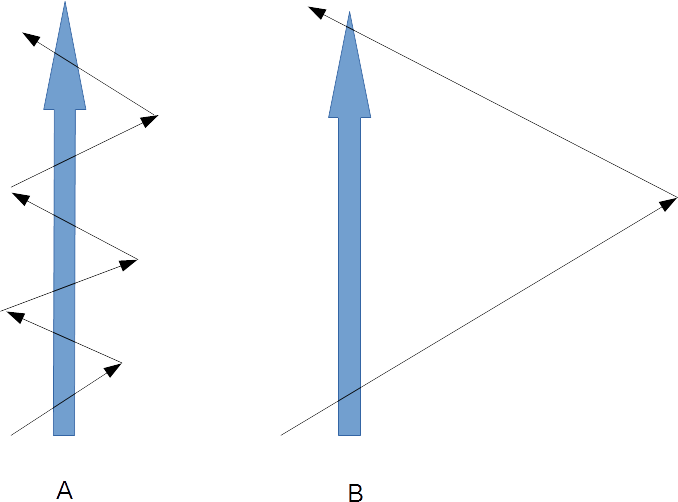 Which is objectively better? Neither. Both strategies are appropriate for different situations.

Lets imagine boat B is chasing boat A. Boat B may be able to overtake boat A by not wasting as much speed tacking so often. But what happens if boat A decides to change course while B is tacking so far away? What happens if the wind changes unfavorably while B is so far away? You have to make choices while predicting the future, a very challenging task.

Here is another example of a course decision: 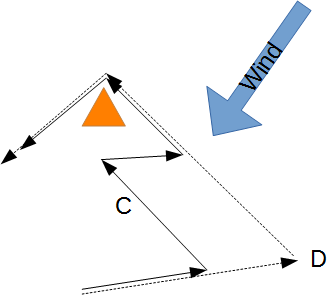 This is an illustration of a racing situation. In here, we are rounding the triangular mark counter-clockwise to the left. The solid lines and the dashed lines are two possible courses. If you look at where the two lines split, between there and the place where the dashed line turns, is a sort of 'no-go' zone for the dashed line course. If you turn later than the solid line does, you'll have to turn later again to avoid hitting the mark. But if you wait not long enough, you'll have to do two short, back to back tacks, which can be brutal on your speed and kills your maneuverability. If you take the dashed course, you can see there is somewhat an optimal place to turn, right where you are now able to reach across the wind at maximum speed and pass just alongside the mark. Going any further and you're wasting time.

With some time at the helm sailing, one can develop an intuitive feel for how best to pilot a course, but people have written vast books to try to cover the entire subject and you could read them all and would still need practice.

In theory, there is no difference between theory and practice. But, in practice, there is.

The text implies differences in the ships.

Once settled on the new tack the Loire’s natural advantages asserted themselves once more. She showed her extra speed and extra weatherliness;

In such a case Hornblower on the Hotspur would be tacking tactically to keep as much distance as possible between the two ships. The Loire must match his tacking to stay close, but every time the two ships tack Hornblower gains a little distance as he's faster to maneuvre. There's a mention of a squall which suggests that normal procedure would have been to tack away to avoid it.

Video showing tacking a large square rig vessel and the amount of time it takes, all in, about 5mins.

For modern inshore sailing and racing in small boats, you have to consider that the wind doesn't just sit in one direction and never change. It constantly shifts.

Remember that a header on one tack is a lift on the other.

One would normally tack into a header as this allows you to sail the shortest course. Quirks of wind shifts mean it normally flips back and forth between two directions, if you tack into the headers you'll almost never get a lift.

Forester provides the answer earlier in the text

Assuming a steady wind speed and direction, no obstacles to avoid, and progress to windward not in excess of that needed to make one's destination on the opposite tack, there is no such thing as an optimal moment to tack. In the passage cited, however, the obstacle is the pursuing vessel.

That French captain knew his business. Mathematically, the best course to take when trying to close on a ship to windward was to keep the ship being chased right in the wind's eye, and that was where the Hotspur now found herself again, relative to the Loire, while the latter, resuming her former course, close-hauled, was twenty or thirty yards nearer to her in the direction of the wind. A gain of twenty or thirty yards, repeated often enough, and added to the steady gain resulting from being the more weatherly ship, would eventually close the gap.

The Hotspur tacks more readily than the Loire, recovering her speed sooner, so holding a tack longer gives advantage to the Loire which is both faster through the water and more weatherly we're told. Hornblower delays his tack in this passage in order to perform it under the trickier conditions of a passing squall knowing that when the Loire attempts to tack in the squall it will be still trickier for her!

Not the answer you're looking for? Browse other questions tagged sailing tacking or ask your own question.

5
Is there a point at which one is committed to a tack?

8
Changing the shrouds, how would I know how far if I need to?
9
How would you evaluate sailing lessons for adults?
11
What is the aspect ratio of a keel and how does it affect your how your boat sails?
7
Maxi Yacht: How do the keel and the hull align when heeled over?
16
How do you stabilize a sextant for use on a boat in rough water?
8
How often should I change the lines and sail attachment rings?
12
How to manage the sail of a sunfish when paddling?
5
Is there a point at which one is committed to a tack?
4
What do the numbers on a sail boats sail represent?
0
How long to sail from the Yucatán Channel to Belize City?