What is bog shoeing?

This question asks about bog-crossing grades of difficulty, and special equipment like bog shoes. What are bog shoes?

Modern bog shoes are special footwear made for bog walking, or bogshoeing.

Bogshoeing is essentially snowshoeing through marshlands. It's popular in Finland, and Estonia where they have large bogs that comprise over 20% of the country's area. Traversing these bogs is difficult or impossible without using bog-shoes, which are similar in appearance to snowshoes.

Bog shoes make otherwise inaccessible wetlands accessible by foot, the shoes prevent the hiker from sinking into the bog, and from causing potential damage to the environment. They have been used for many years for crossing bogs, and are now becoming a draw for tourists to visit large marshlands. 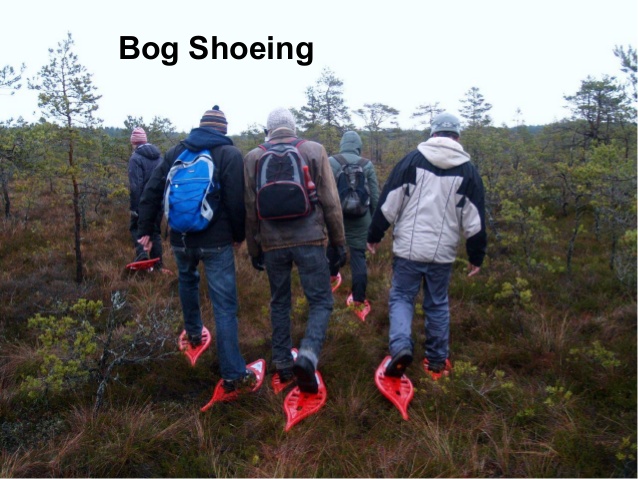 Not the answer you're looking for? Browse other questions tagged hiking footwear bogshoeing or ask your own question.

12
Which brands make wider hiking boot sizes?
10
What shoes to wear while climbing monolithic granite rocks?
15
What are the benefits of Vibram FiveFingers?
24
Climbing barefoot/in toe-shoes?
18
What is the best type of shoe to wear for crossing deep rivers?
42
Why do so many people hike with such light footwear?
14
How can I tell a “trail shoe” from a regular sport shoe?
9
What are differences between higher and lower shoes other than ankle support?
4
UK blanket bog peatland water - safe to drink?