How to inspect climbing bolts?

I am most interested in setting up a top rope anchor on 2 bolts side by side. I feel like in this case you almost have to be more careful using bolts for a top rope than sport climbing because in sport climbing you are clipping a bunch of bolts all the way to the top, so if one fails, there is another one in different rock that will probably save you to-where-as if one of two bolts for a top rope are in bad rock, both bolts are probably in bad rock. Specifically I am asking:

How to inspect a climbing bolt?

Are there any non-obvious things to look for when inspecting a climbing bolt?

If a bolt is placed very close to the edge of a corner of rock, what proximity is considered safe? I am thinking of some climbs where the bolts are literally only a foot from the top of the cliff - could the combination of the bolts shear off a piece of the rock?

Also, do bolts ever fail catastrophically? I.e. just blow out of rock, or do they tend to fail over time so you can see it coming and avoid those bolts?

This may speak to some of your concerns: American Safe Climbing Association

The American Safe Climbing Association publishes guidelines for safe bolting. Their stuff usually targets the people who are actually doing the bolting, but can be worth reading for general purposes. They have articles on how to tell which bolts are good and which are bad. And the have a lot of other interesting safely stuff

The list below is all fairly subjective, and you should still read the ASCA's website, but here's what I look for -

Bolts will sometimes fail, but not that often. The only time I've heard of it was on a new route when the route bolter wasn't finished with the route, but didn't adequately communicate it. He had a known-bad bolt on a route, and it blew when someone took a lead fall on it: Bolt Failure at New River Gorge

If you doubt the bolts, you could certainly rig an anchor (or a backup) off trees or boulders near the top of the route (if one is available), or just not do the climb. Trust your gut on this stuff - I think that bolts are generally safe, but don't know your area.

In addition to what David mentioned, their are area specific concerns and, specific ways to check bolts in those areas. Most of the time the generic advice will be useful, but please make sure you speak with climbers familiar with the area you're going to understand about possible bolting problem. Also climbing guides usually contain this information, but not always.

A perfect example of this is Thailand, where bolts corrode badly even when they look perfectly fine outside. To make matters worse you can find two bolts next to each other, a matte Titanium bolt and a shiny steel bolt. First instinct is to clip the shiny bolt, while Titanium bolts are the new ones that won't corrode. Also the type of glue used is important is a way to identify better bolts. You might not go to Thailand, but I mention this just to make it clear that it's important to go beyond the generic advice.

For more information about Thailand's bolting problems go to http://thaitaniumproject.com/

In old routes in European (at least) mountains and in quarries used by cavers for training you can find small expansion bolts called spits or Cheville Autoforeuse. They use just 8 mm thick screws and are very short because they are often drilled by hand. You often need your own hangers but sometimes they could be pre-installed.

These can fail. Cavers never use just one of them in single rope technique (SRT) and they were not designed for climbing. Climbers are not always aware of their limitations. They are not stainless and their strength depends on the details of the placement (exact depth of the hole).

Never use just one of them for descent. There was an accident in High Tatra where mountaineers fell large distance but they luckilly survived in thick snow. (report about the failed bolt in Czech language)

At least in Czechia you can find similar ones, often of unknown origin, sometimes thicker, but based on the same principle, in many old routes. It was impossible to import high quality bolts from the west before 1990. Often they look rusty on first sight but if the hanger is stainless steel or aluminium it may not be apparent.

A similar case of suspicious bolt in Great Britain. "The manufacturers of "Thunderbolt" have categorically stated to the BMC that this product is not tested or recomended for the purposes of fixing climbing anchors." Instructions for identifying these bolts are in the link.

Don't descend of a single one and combine them with your own pieces when climbing.

To add to a set of already great answers I would like to add two points: Glued bolts and weird old bolts.

There are generally two types of bolts used presently: Mechanical and glued bolts. Mechanical bolts are mostly sleeve anchors: When tightening the nut the first time a cone is driven under the sleeve which is thus forced against the wall of the borehole. This type of anchor is hard to test. In general it is very reliable but has one failure mode: If tightened too much, the holding strength decreases a lot, but usually not enough to just pull it out by hand when testing. So you just have to hope the route establisher did a good job (generally true, but accidents have happened).

Glued bolts have a smaller diameter than the borehole and are held in place by glue. This should be more corrosion resistant as it is waterproof, still the glue and bolt need to be corrosion resistant. One prominent failure mode of glued bolts can be easily tested. If the borehole was not properly cleaned before gluing, you can turn the bolt. Just insert your quickdraw and use the biner to try to turn the bolt. Still in frequented areas, I hardly ever do this. For a toprope anchor it is certainly not a bad idea to check this.

The second point are exotic/antique anchors. There are norms today, but you will still find gear that is not normed. Especially on old or alpine routes. The oldest kind are "Stift/Stich"-anchors (in German, do not now whether there is an English equivalent). These are the earliest hand drilled anchors. They are rectangular and quite fin, usually not very deep. If you find one consider yourself lucky and you may use it for commemoration, but they probably wont hold a fall. Apparently "Kronenbohrhaken" are the socalled spits @VladimirF mentioned in his answer. These came up in the 70s and could hold a fall, thus permitting a huge increase in sport climbing level. However they were hand drilled and had the drilling bit at the top of the bolt itself, so it is hardened steel. This is bad for corrosion and stability, so today they should not be used anymore. You will know one when you see it (rusted, antique looking design).

In the alps (I do not know about other regions) you can often find so called "Muniring". These can be huge as on the photo below or any other size. However they are not normed and you have no idea what kind of bolt is in the rock. I was once shown a removed "Muniring" of about the size of the one below that had a 6mm diameter about 2-3cm long bolt attached to it. So these are not reliable. There is a plethora of other sometimes homemade anchors. You should never use those as your main protection - well, if it is your only protection, which does happen, you might as well :) 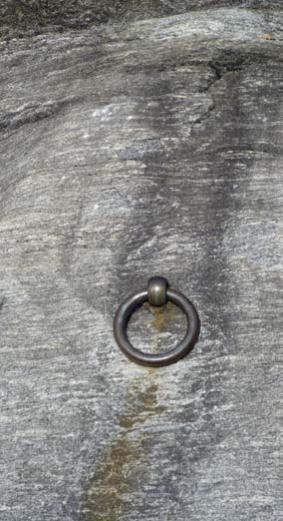 13
What are opposite and opposed carabiners?

15
Toproping with two ropes joined by a double fisherman's
8
Indoor vs. Outdoor sport climbing
14
Dealing with large runouts during sport climbing
12
Bolt Conditions at the New River Gorge
9
How can you safely set up a climbing anchor from above?
8
What do you hang on 1/4" bolts while rock climbing?
15
Rock climbing over edge - What can I put under the rope to protect it?
14
Is a single strand of webbing unacceptable for climbing anchors?
11
Climbing harness: clip two carabiners to avoid cross-loading
5
Multi-pitch sport climb: Rope too short for rappelling, but having a backup rope