Reposting this from a Facebook discussion. It's a picture taken from a retail store where they have attached a pin-tag through the rope to prevent theft; a common practice at this location.

My gut reaction is to avoid it like the plague, but I have a tendency to treat the rope like it's sacred. Has anyone seen this elsewhere? Would you climb on it? 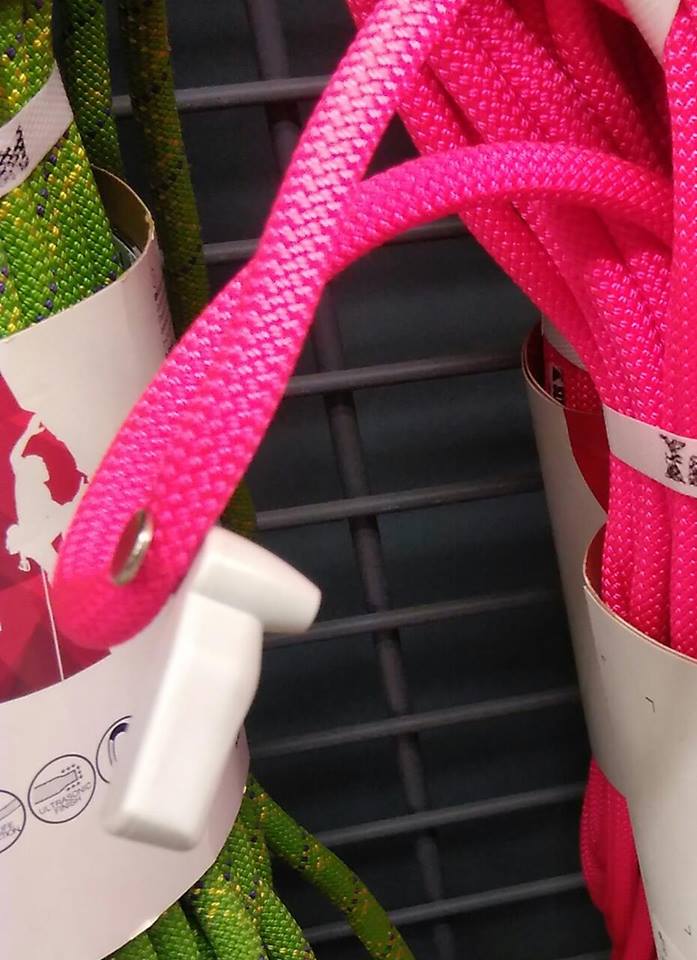 Ewww. I'm guessing they punch pin tags through $700 gore tex jackets as well? And condoms? Even if the amount of damage is minimal, it's still something I would rather not do to my rope. Some climbers do use a needle and thread/dental floss to make small whippings on the rope to indicate that the rope ends are approaching. However, there is a large difference between carefully easing a sharp needle through the rope and a retail worker, chugging along at minimum wage, shoving one of those generally ragged and burred pins through the rope.

As you mention, the amount of damage is probably not severe. Similarly, storing the ropes in a vat of motor oil or sewage would probably still be safe. This doesn't mean that any of those are best practices and speaks more to the great extent that manufactures go through to make sure their products are safe. Furthermore, I don't recall the UIAA having a rope testing category for standard falls with a security tag through the rope.

At the very least it shows a lack of respect for the end user (my making money is more important than your safety). There are so many other ways to prevent shoplifting a rope. For example:

If the establishment is unwilling to alter their practices, I would strongly urge you to contact the manufacturers of the ropes. Having worked specialty outdoor retail, this would be the sort of thing that a reputable manufacturer would drop a dealer for.

40
Things to keep away from climbing ropes
12
Avoiding tangles when leading on double ropes
6
Do Half/Twin/Double Ropes get Middle Marked?
6
Can nylon ropes fail from bend fatigue?
18
Difference when using twin or half ropes
11
Correct and incorrect slip-slap-slide belay technique
15
Is "Short roping" "Death Roping"?
37
Is there a way to find out the age of climbing ropes?
9
Would top-roping in this limestone quarry be reasonable?