Should I expect to need snowshoes in the Serra da Estrela in April?

I have a work trip to Portugal later this month and I intend to attach a short trekking/backpacking trip in the Serra da Estrela. I have around 62 hours. Will I need snowshoes for my hike?

The Serra da Estrela is a mountain range up to 2000 metres high. Nearby Guarda is Continental Portugal's highest city (1000 metres high) and has an average April temperature range of 4.6–12.4°C, which would mean 1000 metre higher up should be around -2–6°C, but that doesn't tell me about the microclimate of areas such as Covão da Amatade (1440 m), the Covão dos Conchos (1640 m), or the area in-between (trail passes over 1800 m). These things are very local and depend on many factors. Is anyone familiar with the area in different seasons and could tell me if I should expect to need snowshoes?

It might help in places, but you'd be taking them on and off regularly as the snow is mostly patchy, and it doesn't address the bigger problem of meltwater.

The highest part of the Serra de Estrela, roughly the part south of road EN 232 that runs west-east through Manteigas, does still have substantial snow in April.

When approaching the highest part, it becomes apparent there is still substantial snow: 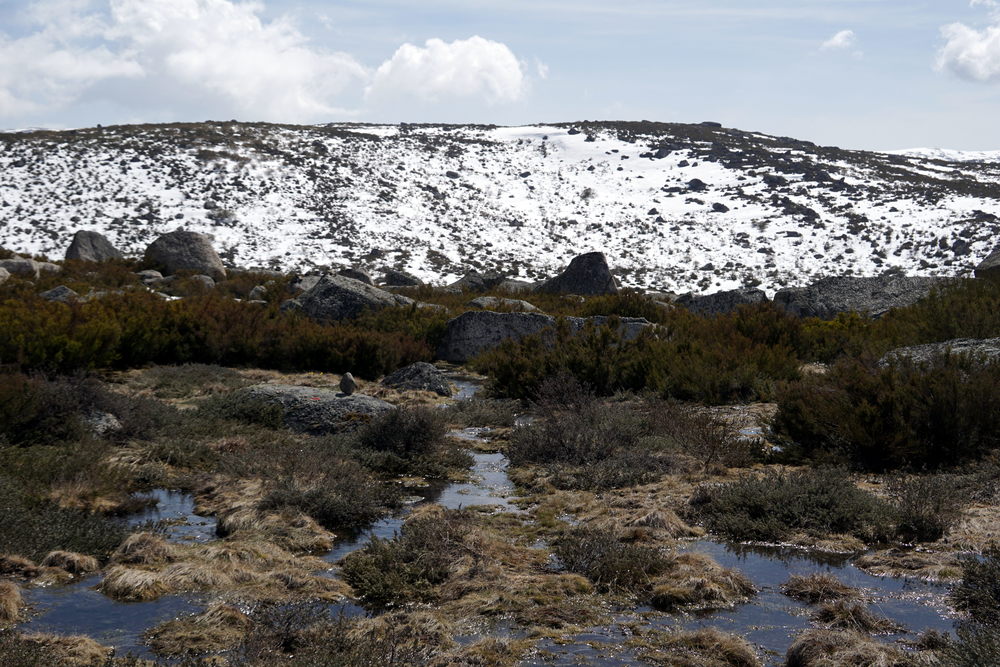 Above Vale do Conde.

However, that is not the worst problem. It was a warm and sunny day when I was there. I believe the stream in Vale do Conde is normally ankle-deep and easily crossed. When I was there, the entire valley was flooded with meltwater. Worse, I had not prepared for river-crossings, and had brought neither stream-crossing footwear, nor my fording pole. I tried to ford barefeet, but turned around when I reached the actual bank after 5 metre of knee-deeping wading through the flooded part, only realising the actual stream had become waist-deep. The aborted attempt resulted in many thorns in my bare feet, ouch. 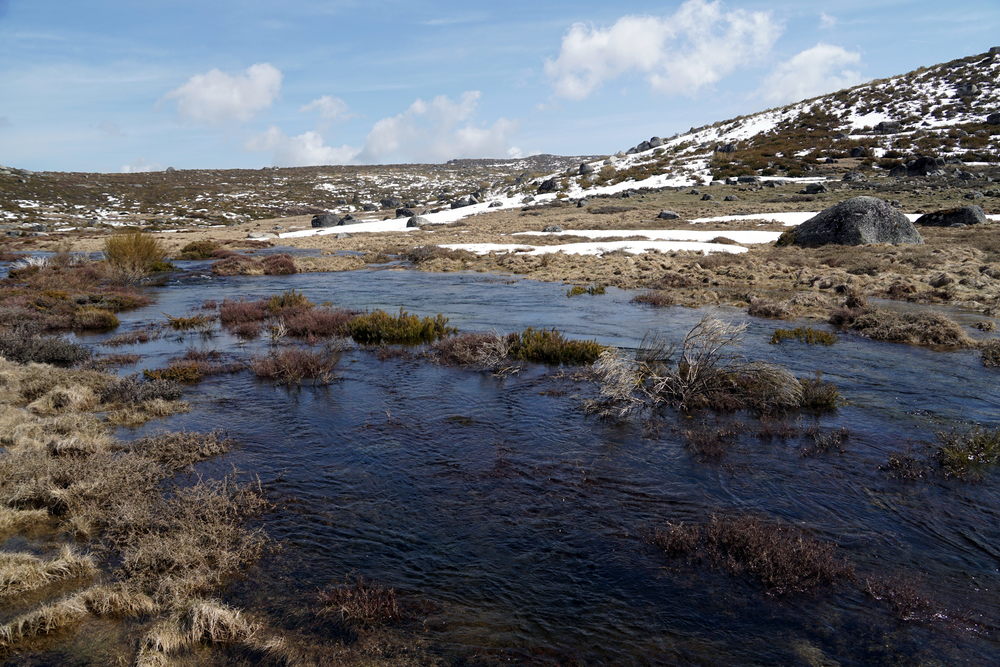 Spring flood in Vale do Conde, forcing a detour.

Instead, I ploughed through the snow upstream, hoping to find a way to cross. Eventually I found a rock lying over the stream, that I could scramble across. I did sink through the snow, so perhaps snowshoes would have been helpful here, but the snow was intermittent so I'd have had to take them on and off frequently. 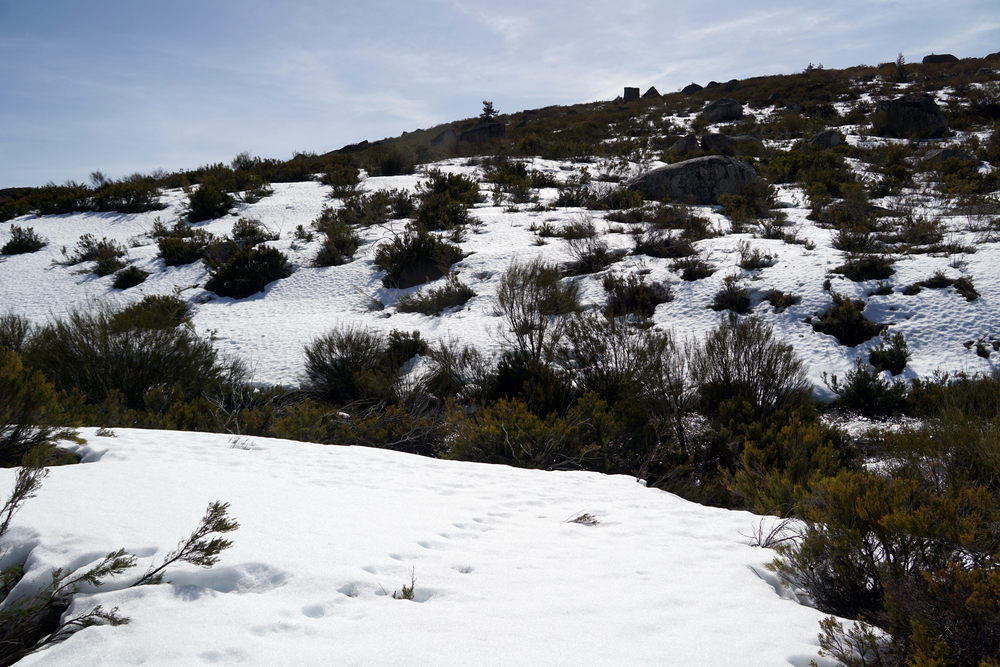 Snow at the detour in Vale do Conde.

Back on the trail, the trail was alternately covered in deep snow, or covered in meltwater. In this case the meltwater was shallow enough to walk through with my boots without getting my feet wet. 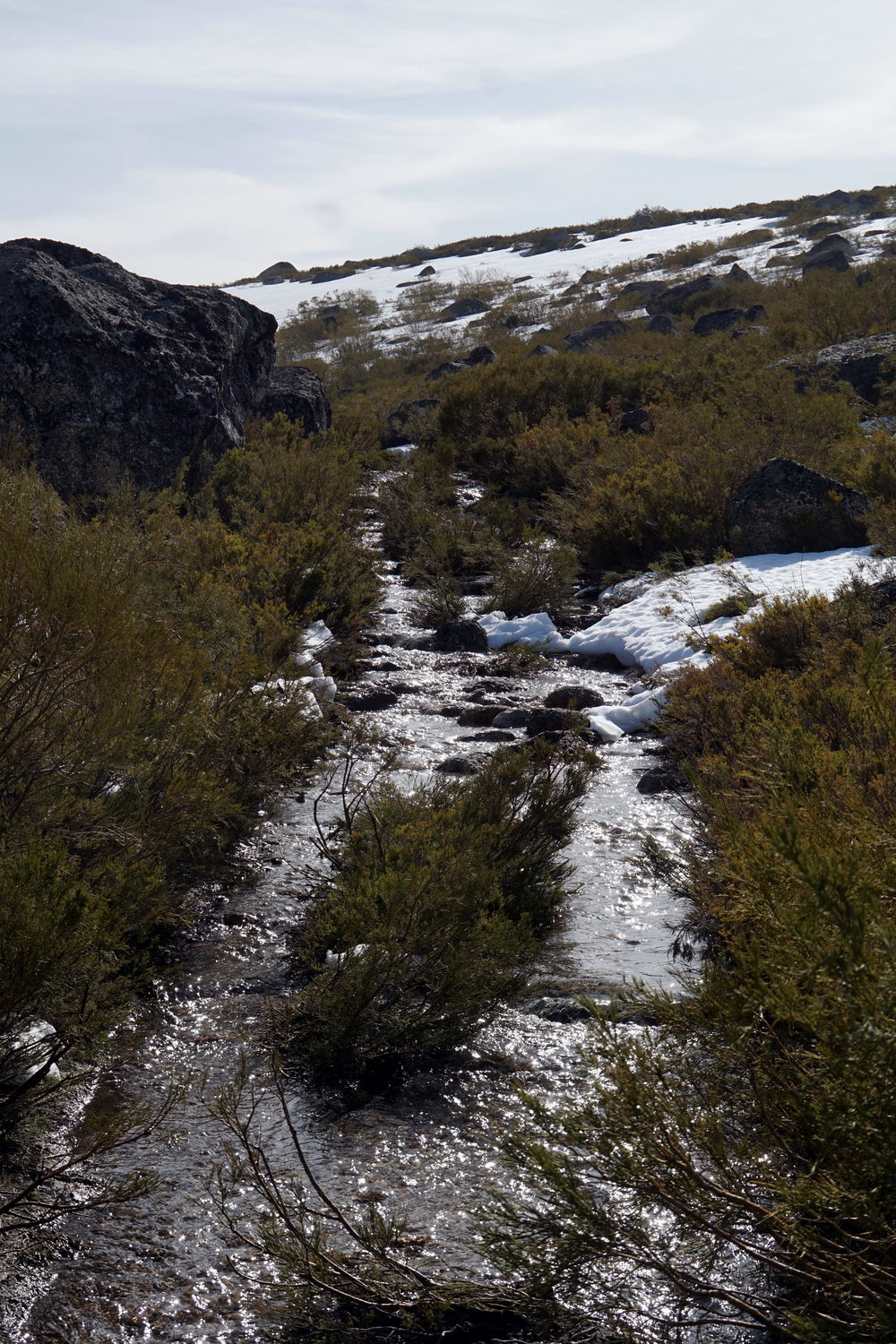 Above Vale do Conde, back on the trail, the trail is very wet.

Viewing the highest mountain, Torre, in the distance, I could tell that there was a lot more snow yet to come. 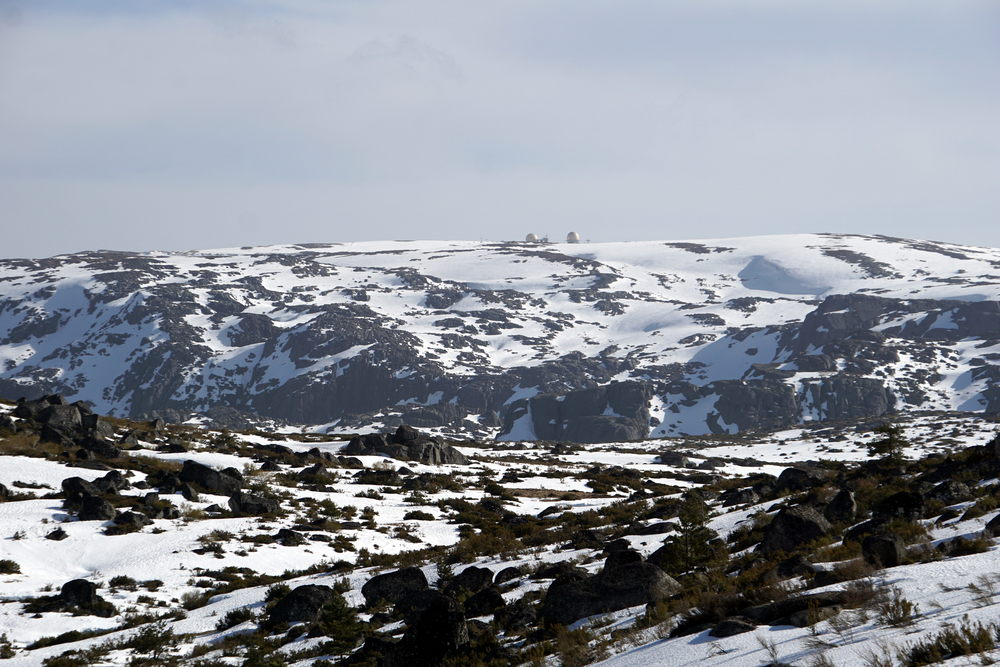 View to Torre, the highest parts of the Serra de Estrela, where people are still skiing (nearly 2000 metre elevation).

Due to delays, I reached no further than Covão dos Conches this day, and camped there illegally, as I was unable to reach the campground at Covão d'Amatade which was another 2–4 hours of hiking away (probably less than 2 in good conditions, but the steep trail down was tricky when I hiked it in heavy rain and half covered in snow). 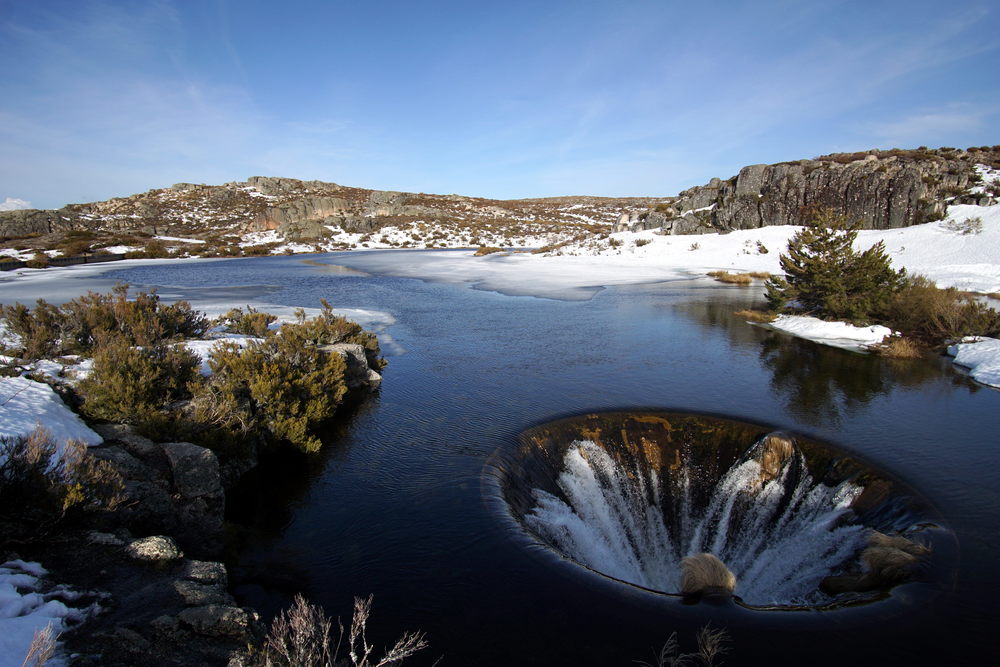 The following morning, the weather was poor. This was the stretch where snowshoes would have been most useful, as I walked through the snow continuously for a couple of hours. However, it was entirely passable without snowshoes. 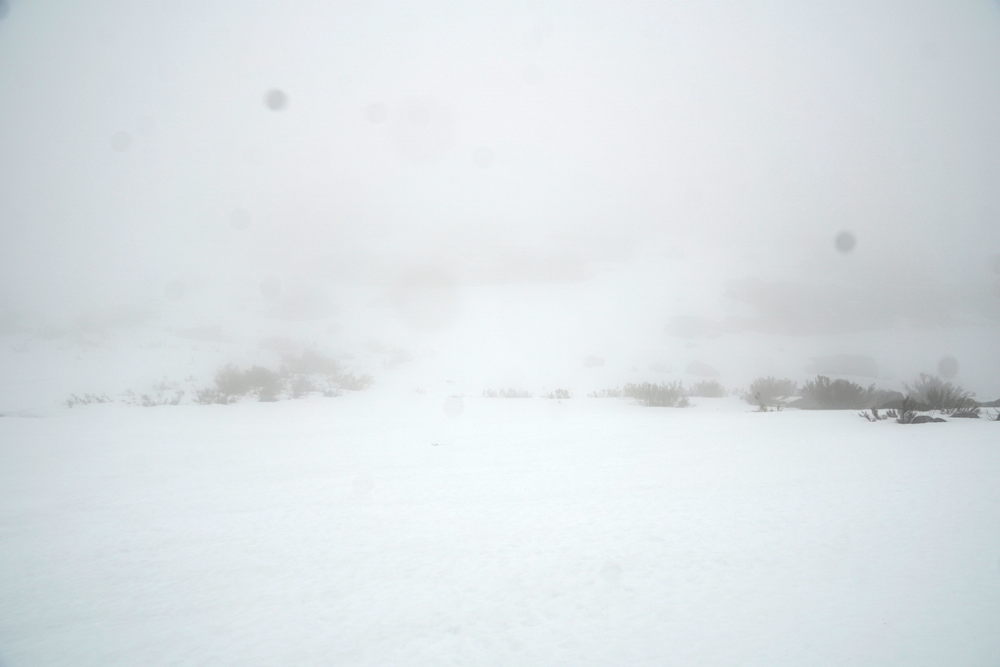 Whiteout at Barros Vermelhos. Snowshoes might have helped here, but it was passable without.

More photos from the hike, including the period before and after I reached any snow, in the full album on Flickr.

Not the answer you're looking for? Browse other questions tagged mountaineering snow spring portugal snowshoes or ask your own question.

11
Snowshoes for hilly terrain
16
How can I make a snow shoe in the wilderness from commonly available materials and simple tools?
17
Why don't people in the UK use snowshoes?
11
Skis or Snowshoes for Colorado
7
Multi-day hiking trip [California, early April]
6
What features to look for in a small snowshoe for getting up and down a long driveway and around the yard during what may be a snowy winter?
3
What is the snow level going to be in the Atlassian mountains(Toubkal) in the end of April?
5
Why do snowshoes have a hole in the front deck?
15
Do I need a rope on the Großglockner?