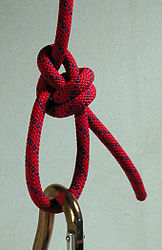 2
Overhand versus underhand loop in tying up a bowline knot
6
Does inside vs outside make a difference in a bowline on a bight?