Can microspikes replace crampons when crossing ice in summer?

When hiking in early summer I often come across patches of old snow. Till now I have managed to cross those by cutting my steps in the snow or walking around. And whenever I had my hiking sticks with me I was really happy. I believe microspikes could be of great aid in those situations as well. 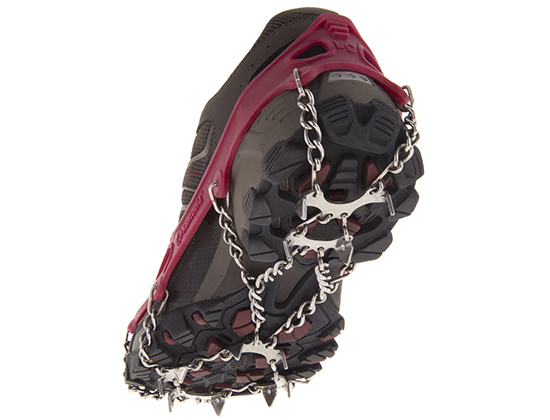 Would they also be useful on ice in summer? I mean small ice fields or non-serious glaciers. Are they in any way comparable to crampons? Do people in general walk on glaciers wearing microspikes?

Absolutely yes. I don't leave my home without them (well, another model than the one you linked) if there is any chance of hitting snow/ice during a hike. For such hikes, they always, at any time of the year, sit at the bottom of my pack, right next to the survival sheet.

I've had at least two occasions where they transformed a stupendously dangerous situation into a happy, adrenaline-ridden stroll. One of which was in late August on the return from a lightweight climbing trip - nobody would have expected ice there, but it was on the shadowed side of the mountain, and really ugly.

They don't weigh that much (at least compared to my body weight ;) ), and even if we are not talking life-or-death situations, they still can mean the difference between taking a large, uncomfortable detour or plowing along.

It's pretty obvious that there are limits; you would rather have the "real deal" with you if you have to do very steep upwards climbs where you would really need the front teeth of crampons. Obviously, if you know that you will be facing crampon-level ice, then bring your crampons.

Also, if and when I have to unpack them unplanned, then while putting them on I do a good hard amount of thinking whether I wish to continue or turn back, simply because I might not know what conditions are around the next corner.

Would they also be useful on ice in summer? I mean small ice fields or non-serious glaciers.

Yes, they (well, good models) work just fine on ice, that's what they are made for. With my favourite model (Edelrid 6 Point Grödel), I can just walk on blank, mirror-like ice as if it were a normal road. Doesn't even take much more effort.

Are they in any way comparable to crampons?

Yes, until it gets steep. They basically only lack the front- and side-facing teeth (depending on model), and obviously they may be a little less robust overall, but for straight steps, it's more or less the same. For level walking, they are more comfortable for me.

Do people in general walk on glaciers wearing microspikes?

I have seen people on glaciers with Nikes. People will wear everything. :-( Don't be that guy. But do have microspikes in your backpack just in case, to do a safe level crossing of a glacier, maybe. If you're sure that there are no holes, and all that...

Note that the Edelrids I mentioned are a very old model, so please do not simply buy them because of this mention; there may be much better alternatives available these days. On the other hand, it might be a good sign that they are still sold - they are very tough. I like the fact that they are one contiguous steel platform and not just a few spikes connected by a chain. They stack quite nicely and do not use that much space in the pack.

Depends on how steep your ice patch is.

Crampons are really good when you have steep slopes and you need to do some real front pointing. Crampons are good for mixed climbing as well. They are also heavier than microspikes.

Microspikes make a good choice when the slopes are less steep. And when your needs for grip are not that severe. From my experience, they are not as durable as crampons. Some of the spikes just break off if you use them on rocks constantly (thereby reducing the grip as well). Also note that micro spikes can't really dig deep into ice. It's more like a chain you would put on your wheels to give you additional traction. And yes, for lesser glacial patches, microspikes are good and are used by people.

It depends, if the snow is pretty level and you don't need the front points on the crampons to get up things, then yes microspikes can be a good substitute as they are certainly lighter and don't require specialized boots.

They will never be a full substitute for crampons, but they should fit your purposes better than crampons would.

Not the answer you're looking for? Browse other questions tagged hiking ice crampons glaciers microspikes or ask your own question.

14
How to be safe on lake and river ice and what should I do when I fall through?
20
What is the proper technique for self-arrest when wearing crampons?
10
Carrying crampons safely when not using them
7
When can a glacier be crossed without special gear (axes, crampons, rope, etc.)?
11
When to sharpen crampons?
13
How can I perfect my backyard ice rink?
11
Can I get crampons for small feet?
10
Self rescue procedure when falling through ice, but the ice keeps breaking
5
Crossing small corners of a glacier when hiking in summer
4
How and when to sharpen ice screws?