Is pouring boiling water into a plastic Nalgene bad for you?

I've heard that pouring boiling water into a Nalgene-style bottle is either completely fine or definitely going to kill you. Which is it?

Are there any scientific studies demonstrating exactly what happens when you pour boiling water directly into a Nalgene, and how bad this could be for a person?

Let's assume we're talking about a sturdy BPA-free plastic Nalgene-style bottle (not necessarily that brand), available today from outdoor retailers designed for (amongst other things) outdoor sports. You fill it with boiling water (from a stream, snow, faucet), then close the bottle to let it cool. You will drink the water later once it's drinking temperature.

Most Nalgene bottles are designed to be able to stand up to boiling water.

Today, many hikers and others recognize the distinctive appearance of Nalgene-branded bottles. Its laboratory pedigree is still suggested by the markings, in hundreds of millilitres, of the volume contained. The materials resist stains and odors absorption, and can be filled with boiling water.

Screw-in filters, which allow the user to add coffee grounds or tea, pour boiling water over the contents, seal the lid, and brew the beverage.

Another widely available Nalgene Outdoor product is a 650 ml (22 fl oz) "All-Terrain" or "bike" bottle. The bottle itself is made from low-density polyethylene (LDPE), and its screw top has two moving parts: a drinking nozzle that seals until snapped open by pulling on it, and a hinged Lexan dome, that when closed both snaps the nozzle closed and protects the nozzle against contamination. Unlike traditional Nalgene containers, this item can be damaged and potentially ruined by filling it with very hot water.

It is true that Nalgene bottles used to have BPA, but Nalgene phased out those products in 2008.

On the same date, Nalgene announced it would phase out production of its Outdoor line of polycarbonate containers containing the chemical bisphenol A (BPA).[12] Nalgene subsequently adopted Tritan, a BPA-free copolyester made by Eastman Chemical, as a substitute.

and at the same time it looks like even the non BPA free bottles did not leach significant amounts of BPA.

Hundreds of studies have been conducted since this time and have shown that under normal use conditions (anywhere from freezing to a hot day), BPA does not leach from the polycarbonatein detectable amounts.

This confirms other studies that show BPA does not leach from polycarbonateplastic in doses that will cause harm, even under the most extreme conditions

Nalgene is owned by Fisher Scientific. They do lab bottles, recreational bottles, and lab equipment.

Boiling water is a probable exposure. If bad thing happen the lawyers would be putting out warnings.

Not 100% but a product listed to be dishwasher safe is likely to be safe at boiling temperature.

Accoring to this Nalgene currently uses Eastman Tritan copolyester sans any trace of polycarbonate. According to this data sheet the melting temperature is 500 F. I do not find operating ranges.

No more BPA but with PBA products there is information it will leach at a higher rate at higher temperature. There is some fear other products in plastic are not good for you but have not yet been discovered.

Not sold by Nalgene but you can buy coffee presses for their bottles. one press

There are two different kinds of Nalgene bottles. The originals were soft, sort of white/translucent, and designed for lab work. You absolutely could pour boiling water into them - and much worse. I certainly did it all the time - just don't screw the lid on tight until the whole thing cools a little, or pressure differential will be hard on the bottle. A site selling them describes these as HDPE. A summary page on that site says they are fine to 120C. 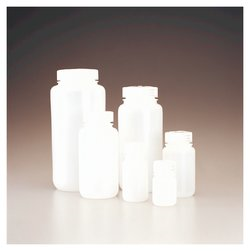 These days all the cool kids have Nalgene bottles that are clear and rigid. I wouldn't expect you could pour boiling water into those. The Nalgene website says they are made from Tritan. 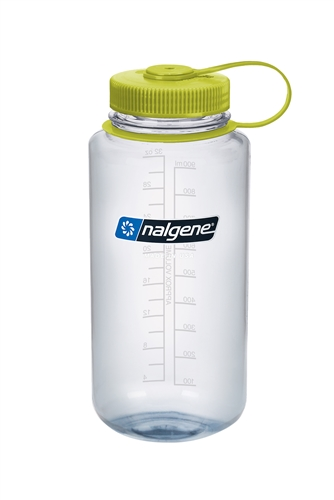 Just to be clear, the 'newer' style clear nalgene bottles are perfectly fine with boiled water from a practical use point of view. I cannot comment on chemical leaching but I regularly put boiling water in mine. On a cold night I will boil a litre before bed, fill my bottle, screw the lid on tight and put it into my spare socks. As a hot water bottle this is superb and is often still warm in the morning. I don't even have to get out of my sleeping bag to get mater to make my morning coffee in the tent porch.

TL/DR; Always safe because the bottle is not going to melt or poison you, but may be unwise because, depending on the type of plastic used, it could cause some warpage

Nalgene is a brand name/trademark not a material. All of these bottles are branded Nalgene ThermoFisher Scientific but you can see that they are made from a variety of plastics. Each of these is going to have a different profile.

HDPE is a common food safe plastic and its melting point is 120 °C so boiling water is not going to cause a catastrophic failure; however, it is a thermoplastic and the operating temperature is considered -50°C to +60°C Note that the ThermoFisher site rates their HDPE bottles to -100°C.

HDPE starts to soften around 64°C Vicat softening point, but 82°C is the limit that people have established before you risk warping ('boiling' water in coolers to cook corn)

Some have mentioned Tritan as a material. That is an Eastman trademark and it appears to be a co-polyester. There are several co-polyesters under that brand, but the melt temperature is much higher. The deflection temperature at 66 psi is generally above boiling so that is going to be able to maintain stability even with a sharp blow.

However, to maintain a seal, the container and the cap have to be different materials of different hardnesses. If this is not possible, they could use a gasket of pliable thermoplastic elastomer.

So the rigid tritan bottles should be good for holding boiling water as it cools, but you are going to have to take into account the lid material as well so caveat emptor.

HDPE or LDPE I wouldn't do straight boiling water because they are more liable to deform, especially if you squeeze or otherwise apply a force. Let it cool down to 82°C and you should be fine.

Of note, dishwasher safe has no bearing on the ability to hold boiling water (other than if it is not dishwasher safe, it is definitely not safe for boiling water). The water in dishwashers should max at 65°C (150°F)--which is a notable point for HDPE btw--but well below boiling

Nalgene (probably a trademark, not sure what the generic plastic name is) is not a good material for a water bottle intended to be used in the back country.

Nalgene gets brittle over time, even without abuse. I once accidentally dropped a full quart water bottle onto the ground, and it shattered. I had a different bottle develop cracks and leak into a pack. These incidents were maybe 20 years ago, and I haven't used Nalgene since. I think that boiling water accelerates this process.

Nowadays, there are many things you buy anyway that come in bottles of the right size and material to use outdoors. The common #1 recycling plastic (PETE?) seems to work well. It's light and tough and cheap. I keep a few empties handy. Even if you have to deliberately go get one, it's easy find juice or whatever that comes with the bottle. The juice+bottle doesn't cost much more than one of those fancy water bottles.

However, don't even put anything hot into such a bottle, let alone boiling. High temperatures makes the plastic shrink and deform.

22
Under what conditions does heating a tent artificially make objective sense?

21
Plastic or fiberglass for a kayak?
12
Will boiling be enough to decontaminate standing water from pathogens and toxins?
8
Carry a larger water bottle or a smaller water bottle for backpacking?
30
Do you need to purify all mountain water sources
10
Reusing the same water bottle for drinking tap water
6
Why is boiling water making my steel pot brown?
3
What percentage of bacteria in water dies if it is boiled? How clean is it after boiling?
11
How do you make an emergency water filter and purifier?
14
How do you boil water without a proper container?