What can I add to alcohol to make the flame visible?

One of the downsides of an alcohol stove is that the alcohol is all but invisible when it burns, and so the danger is that you won't realize its going and burn yourself.

I have heard that adding regular table salt will make the flame light orange, if that is so how much would one need or are there any other common chemicals one could add?

You can try a non chemical way to add visibility to an almost invisible flame: a small metal net layer on top of the flame that the flame will go through and after just a few seconds will be incandescent and glow red / orange 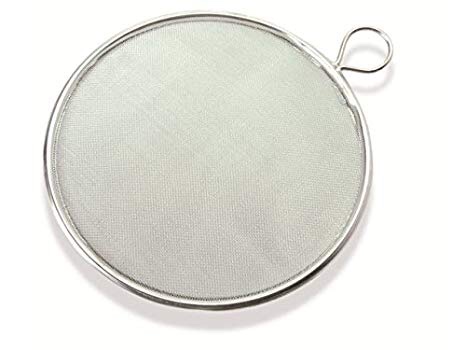 there are already made devices, I cant find a proper translation, in Italian they are called “retina rompifiamma” or “spargi fiamma” literally flame breaker, their intended use is to evenly distribute heat to the cooking pan above but will glow and maybe sort out your problem.

There are several methods, one is adding water. The thinking is this: the alcohol should be at about 75% alcohol, and denatured alcohol sold in the US already has some water in it, or other compounds depending on its intended use (or of the means by which it is denatured). So, if you're not good at math, add H₂O and experiment. Otherwise, use the actual alcohol content percentage and factor in the amount of water to use.

Other remedies including using red Heet, which is something I do not advocate, because it burns sooty, and results in toxic gases. Toluene or acetone (nail polish remover) can be used, as that is what we added in chem class with the alcohol burners. However, we weren't cooking food with it, and also, we had vents to remove the poisonous gases given off. And who wants to carry a bottle of toluene on a camping trip anyway?

This came up once as we were considering a scout trip using the stoves. But they are not allowed to be used per BSA policy. The reason - there are two, and the water addresses only one of them - is that the blue flames are extremely difficult to see. This is addressed by the addition of water or other flammable substances. However, alcohol stoves are generally easily tipped over, and nothing can prevent this. In the end, we scrapped the idea altogether - but not before a bit of experimentation.

A word of caution: anything other than a clear blue flame means incomplete combustion. This will cause soot to accumulate on the pot/pan. Be prepared for a bit of cleaning, or apply liquid soap on the bottom.

See "How to Make Colored Fire (Ask an Expert)", while the article is intended for fireplaces and not cooking amongst the recommendations is borax which is not very poisonous (in some countries it is used in food, while in others it is banned - so don't drink it or spill it on your food). This will produce a yellowish green flame.

If edibility is extremely important and a waste of good alcohol your least concern consider adding a bit of Sambucca or Vodka. Both add a blue flame.

Also suggested is adding a tiny quantity of white gas, but test your mixture before unleashing it on the Scouts.

On another point: adding green food coloring makes it easier to measure and helps ensure that no one confuses a bottle of it for water. It does not affect the color of the flame.

As can be seen in the pictures in my answer to my own question What can I burn in an open cup burner stove?, isopropanol is a good option. In some countries it has replaced methanol in denatured alcohol formulations at a few percent, so the flames are already less invisible than they were when I learnt to use Trangia stoves. Adding another 10% or so makes for still more obvious flames.

Going to 100% isopropanol is less than ideal: the flames get bigger and sootier, which also means inefficient combustion. Isopropanol has a similar energy density to the more typical burning alcohols, so unlike adding something purely for colour doesn't waste weight/fuel bottle capacity. I would also consider "pure" acetone (not pure like I have in work, but the 100% stuff sold with nail polish removers). The combustion products are pretty much the same as for the alcohols, it's commonly used in contact with skin, and the fuel shouldn't come into contact with your food

Not the answer you're looking for? Browse other questions tagged stoves fuel alcohol or ask your own question.

4
What can I burn in an open cup burner stove?

6
What's a good back-up wood and alcohol stove?
9
Which fuel burns the cleanest? Can I use E85 for an MSR stove?
11
What is the most efficient DIY alcohol stove for narrow pots?
9
Can I obtain alcohol fuel in or near Glasgow Airport?
6
Coleman Propane Stove not staying lit
4
What are the different names for and sources of alcohol for my stove?
4
Portable power generator ballpark fuel consumption
13
Using "unusual" liquid fuels in a multi-fuel stove
0
Primus Omnilite liquid fuel stove: can't prime with 0.25 jet
5
What's the smallest (and simplest) practical DIY wood-burning back-/bike-packing stove?