Is there a standard way of marking cooking alcohol containers?

The alcohol used for cooking is poisonous.

As it is used for fuel and is poisonous and clear, is there a standard way of marking the containers (which it seems are often improvised form water bottles), so that nobody drinks the stuff?

The answer is to not use a repurposed water bottle. Further, use completely different types of containers for fuel and water so you can't mix them up.

Back in the day (the 1970's) when white gas stoves were popular (yes, the still are - I have one and it works great), there were aluminum fuel bottles. And, people generally used Nalgene bottles (or big metal canteens) for water.

Well, I knew somebody who thought that using the aluminum fuel bottles for water was really cool. But, he also used them for white gas, operating under the assumption that (1) he would buy different colored bottles (red for fuel, bare metal for water), and (2) anyway you could tell the difference by smell.

All was good until one night, while winter camping, he needed a drink of water. The 'water' and 'fuel' bottles feel the same on the outside. It was dark, so he couldn't tell them apart by color. And it was cold enough that the vapor pressure of the gas was really low, so an opened fuel bottle really didn't smell like anything. It wasn't until he had taken a nice big mouthful of liquid that he realized he had grabbed a fuel bottle instead of a water bottle.

Fortunately, he had the presence of mind to spit the fuel out before swallowing it. Unfortunately, the spray of fuel all over the inside of his tent raised other safety questions (Have you ever seen a down sleeping bag completely disappear in a giant ball of flame? I have, but that is another story.)

I only use Nalgene for water. I only use aluminum fuel containers for fuel. Never the two shall meet...

The "Standard" would be to only use containers specifically designed and marked for the type of fuel it is holding.

There are a number of reasons; safety, legal and physical to not repurpose used containers to hold fuel. I won't go through them, as you are not asking about the implications of this, you are asking for the standard.

The standard is to purchase the size container of the fuel you need. If that container gets empty and IF it is refillable, refill and re-use the container specifically designed and marked for the type of fuel it is holding.

I would use a red, yellow, or green bottle - and never a blue, white, or clear bottle, no matter how you labelled it.

I know, blue containers is also used to store potable water, so I would avoid blue. In the end, red, yellow, or green - and then properly labelled - would be my recommendation.

Always use a fuel container. They are marked and designed for fuel. Never use improvised water containers for fuel. There are various sizes available in retail shops and online. 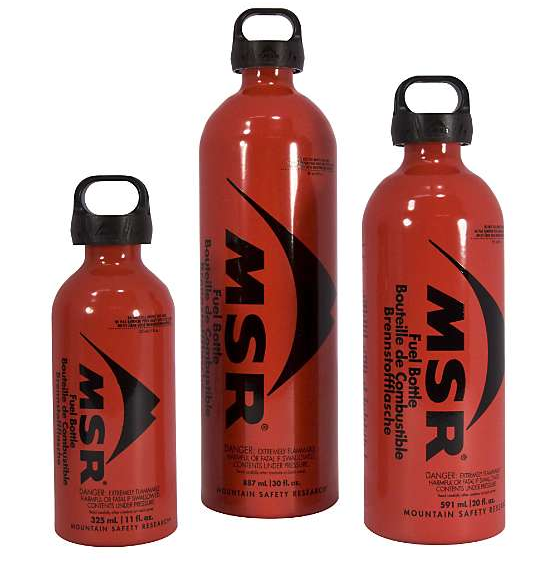 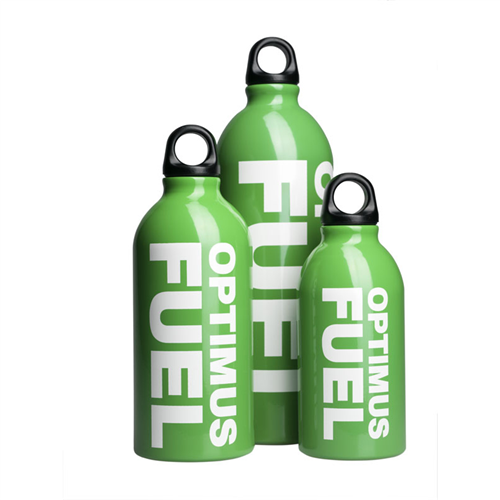 Not the answer you're looking for? Browse other questions tagged cooking stoves alcohol or ask your own question.

33
Why aren't there any electric stoves that can be used for cooking where you can't build a fire?
9
Easiest way to preserve a fishing catch - with cooking or pickling
5
Are there any techniques to cooking food when camping in the wild by harnessing the energy of the sun?