Has extended exposure to sunlight and UV in the arctic or antarctic ever caused someone's eyes to change color?

In Biology SE I have just asked Could being exposed to excess UV in the arctic lead to a human eye color change? If so, what is the mechanism? but comments there questioned weather Arctic hiker Robert Swan's eyes did actually change color due to exposure to UV.

Even 32 years ago people spending all day in brightly lit snowy areas did usually use eye protection of some kind, if not for UV at least to reduce the brightness of all the reflected sunlight.

I'd like to double check here; does this in fact happen? Has someone's eye color actually changed due to exposure to excessive UV in sunlight, especially because of the ozone holes at the poles?

Also, if there's a source specifically about Robert Swan's hike and eyes 32 years ago, that would be great!

Original source: Expedition Antarctica: A father and son's journey to save the planet. 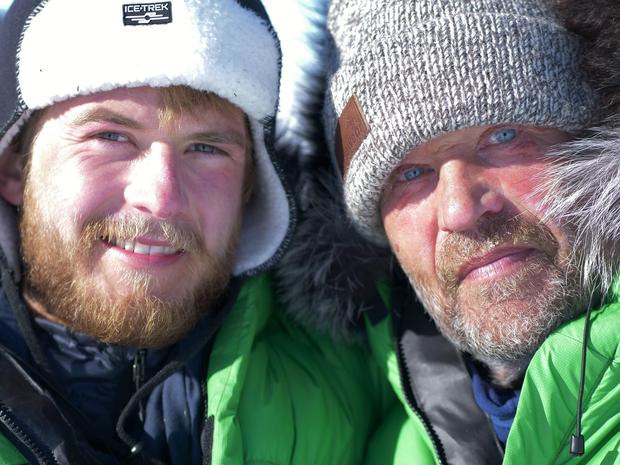 above: "This winter, Barney and Robert Swan became the first explorers to ever trek to the South Pole surviving exclusively off of renewable energy." Robert (the elder) is on the right. From here. Credit: SHELL-Technical Partners

This did indeed happen to Robert Swan, who is the first man in history to walk to both the South and North Poles. His eyes turned from dark blue to light blue on his trek to the South Pole, which began in November of 1985 and ended at the Pole in January of 1986. (His trip to the North Pole was in 1989.)

There are very credible sources, but the best one is Mr. Swan himself! After those two journeys, he co-founded a non-profit organization called 2041 Foundation, the mission of which is to inspire people to care about preserving Antarctica. (The organization still takes people to Antarctica, in case you want to book a trip!)

Robert's a passionate environmental advocate and spends most of his time as a motivational speaker and educator. In the TED video on his biography page of the 2041 website, he describes his journeys in detail, and also shows pictures. The video itself can also be found here. It's 16 fascinating minutes long!

His description of the trip that caused his eyes to change color begins around the 4th minute. He mentions having many of his body parts freeze, including his eyes. He continues:

Something happened to me on that 70 day journey in 1986 that brought me here, and it hurts.

My eyes changed color. In 70 days through damage, our faces blistered out and the skin ripped off, and we wondered why. When we got home we were told by NASA that a hole in the ozone had been discovered above the South Pole and we'd walked underneath it, the same year as it had been discovered.

Ultraviolet rays down, hits the eye, bounce back, fried out the eyes, ripped off our faces. It was a bit of a shock, and it started me thinking.

Farther down on that page is a video from one of his other talks. I haven't watched it, but I wouldn't be surprised if he gave some of the same information.

NASA published a report from its Office of the Chief Scientist, entitled Robert Swan, Leadership on the Edge. It includes one of Robert's hour long video presentations.

Robert Swan, OBE is the world’s first person to walk to both the North and South Poles. He earned his place alongside the greatest explorers in history by accomplishing this feat by age 33. His 900-mile journey to the South Pole, ‘In the Footsteps of Scott,’ stands as the longest unassisted walk ever made on earth.

During Swan's Antarctic expeditions, his team survived near-death encounters as the oceanic ice melted prematurely due to climate change. His eyes also permanently changed color due to prolonged UV exposure under the hole in the ozone layer.

The Shell Corporation, who partners with Robert in his efforts to harness sustainable energy sources for the future, interviewed him in preparation for his second trip to the South Pole in 2017. They used the word "bleach" to describe what happened. The article, entitled Powering a Polar Adventure looks back on his previous trips, to both the South and the North Pole.

His 1985 journey to the South Pole bleached his eyes and burned his face because of a hole in the ozone layer above the continent.

I didn't find anything about other specific people who experienced that phenomenon, although ongoing research into the damage done by the holes in the ozone layer proves extensive damage done to eye health and visual ability, and there are references to the radiation from lack of ozone affecting pigment. Ozone Depletion is one of many reports on eye disease and damage. It and other articles are clear that as the depletion of the ozone layer increases, so do cataracts, blindness and cancers of the skin around the eye and the eye itself. Damage is also done to the cornea, lens and retina.

Whence came Bowers great heat supply? And my own white beard? And X’s blue eyes: for he started from England with brown ones and his mother refused to own him when he came back?

Not the answer you're looking for? Browse other questions tagged snow sunglasses sun or ask your own question.