What Is the name of the supervolcano or earthquake epicenter at Yellowstone National Park?

When I visited Yellowstone National Park, I learned that there was one river that flowed over the exact point where the massive supervolcano would erupt from (if it ever does), OR where fault lines / tectonic plates abutted and where the park’s “Big One” earthquake epicenter exists.

I have completely forgotten what that spot is called, but it had a name. I think it was at a point in the river called the “xxxxx Rapids” or “xxxxx Falls.”

I can’t recall which river it was, but I am actually asking what the name of that exact spot is. Online research reveals nothing, but this site has a helpful map of the park’s rivers.

I'm not sure how anyone would know that exact spot where the next eruption will occur, but this study (Future volcanism at Yellowstone caldera: Insights from geochemistry of young volcanic units and monitoring of volcanic unrest) published by the Geological Society of America show three NNW trending lineaments hypothesized for future volcanic activity, as shown in the image below, that may help define where to concentrate future monitoring. There are numerous faults withing the Yellowstone Caldera as shown on this Yellowstone Caldera Faults website. 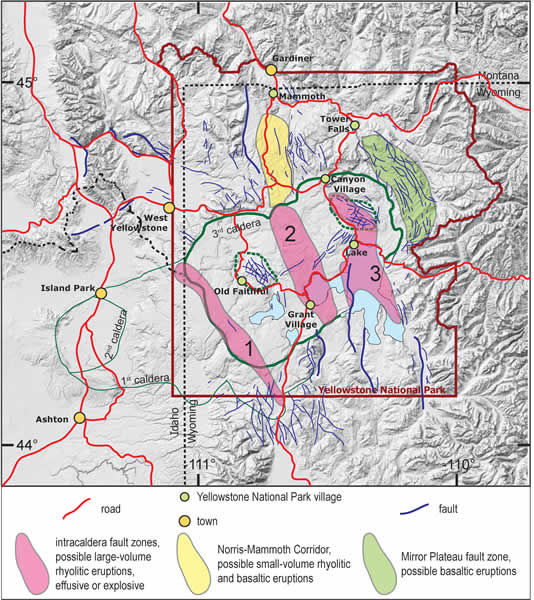 Map of the Yellowstone area showing our hypothesized foci of future volcanism in relation to the main National Park infrastructure, roads, and surrounding towns. The numbers 1, 2, and 3aa refer to the three intracaldera fault-controlled lineaments as discussed in the text.

Other answers address the name part of your question, here I just speak about the location.

It is going to occur in what is now Yellowstone National Park. CUBIC MILES of Earth will ejected "the volume of deposits for that eruption is greater than 1,000 cubic kilometers (240 cubic miles)", this is Hundreds of times more then the 1980 eruption of Mount St. Helens. Every person and animal in Yellowstone park at the time will die. Most of the people in Western Wyoming, as well as parts of Montana and Idaho will also instantly die.

Life as we know it in the United States and possibly the world will be altered by the climate change from debris in the sky, changes that will last beyond the lifespan of anyone who survives the initial event. Read more here and here

The location is North Western Wyoming. It is not a point, it is a large area measured in miles.

I believe you are thinking of the Yellowstone Caldera

Not the answer you're looking for? Browse other questions tagged yellowstone or ask your own question.

9
Where can we see genetically pure American Bison, including Yellowstone National Park?