What sort of glue (if any) to use to fix replacement tips onto carbon fibre trekking poles?

I have a pair of quite old Black Diamond Alpine Carbon Cork Flicklock trekking poles. After much use and abuse the tip on one of them has finally gotten bashed in (the carbide tip has either broken or been pushed back completely inside the plastic mount and although still usable the pole is now nowhere near as secure when in contact with rock).

I managed to remove the busted tip by following the instructions here which suggest dipping it in boiling water then wrenching it off with pliers. It did actually come off surprisingly easily once heated (but before that I couldn't budge it at all).

To secure the new tips, tap them on a hard surface like concrete a half-dozen times. Do not use glue.

but I'm dubious about this: I can easily imagine the new tip disappearing into the next sucking Scottish quagmire it encounters if not firmly fixed to the pole. I'm guessing the original tip was glued on by some sort of thermal-sensitive glue; hence the boiling to release it. The site linked above also mentions "old glue residue".

What sort of glue should I use to fix these? Obviously something which will let me repeat the boiling trick if/when the next time the tip wears out would be ideal, but my Google-fu isn't having much luck identifying such a thing. Or does the just "tap them on" approach actually work in practice?

The photo here - from left to right - shows the old broken tip, the tipless pole and the new "Flextip replacement - Long" I want to fix on the pole. 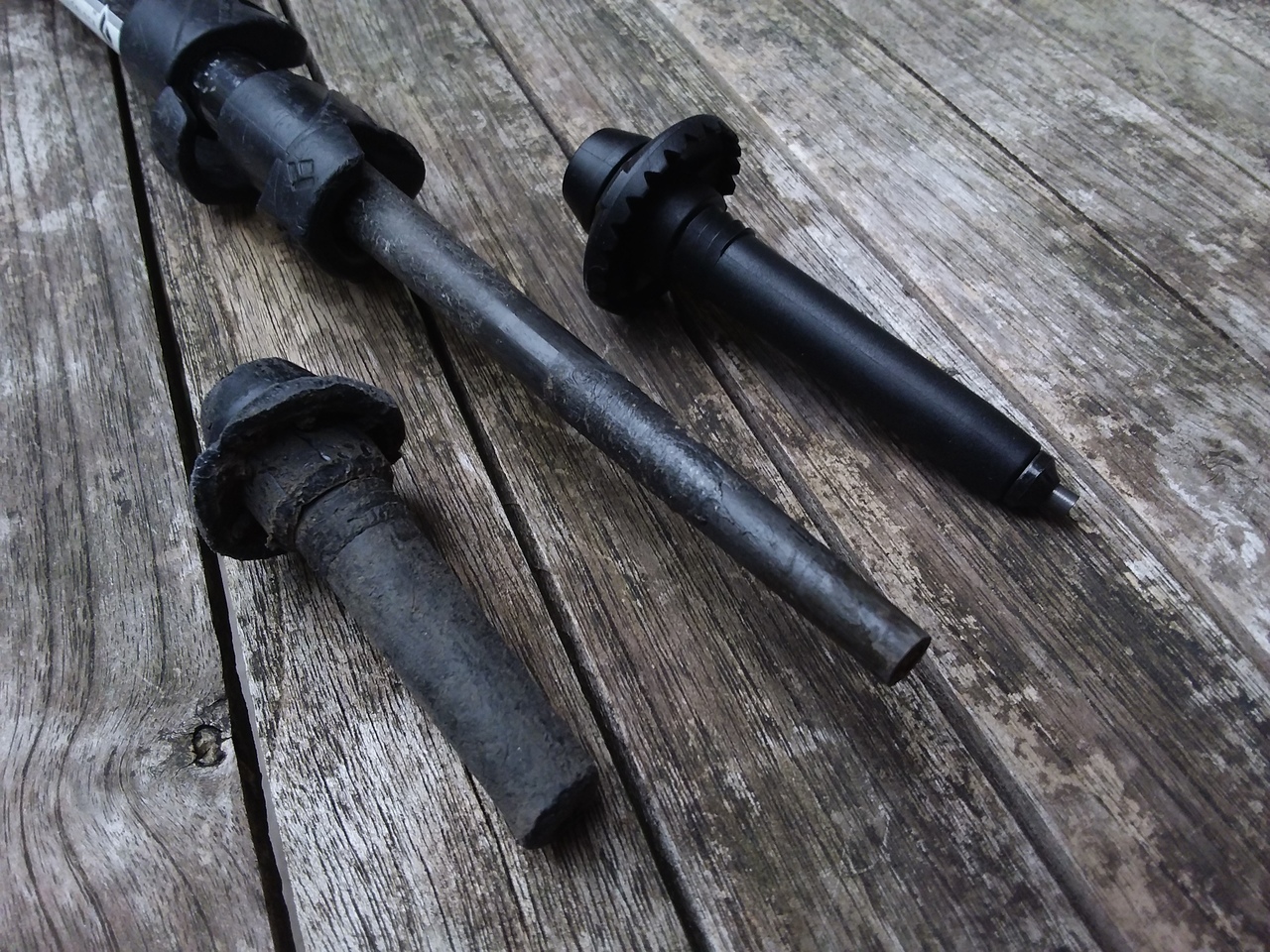 Outcome: In the end I followed the instructions and simply tapped the new pole tip on with a sharp strike of the pole onto hard flagstone pavement. With hindsight, I wonder if it would have been best to do this immediately after the old tip was removed and while any glue reside was still in its warm and sticky state. However despite doing it later the new tip does indeed seem to be remarkably well stuck on as a result and completely resistant to any efforts to pull it off by hand. I will mark this answer as the accepted one if its still there after a year of usage!

There's a website that give advice on gluing different materials.

For gluing plastic to metal, it states,

Clamping can make the difference between success and failure here.

Whenever you are gluing metal it's a good idea to clean it first with steel wool or sandpaper. (Rust never sleeps.)

There are so many kinds of plastic its hard to give advice here that applies to them all. If possible try a small test in an area that doesn't show.

Some plastics have a smooth surface finish that can be sanded off with a 120 grit sand paper, for better adhering properties.

This is assuming that your poles are metal and not carbon fiber.

I have Komperdell all-carbon trekking/skiing poles on which one of the points got loose. Since I preferred Black Diamond baskets, I punched the second tip off the other pole and replaced both.

I used good old regular two-part epoxy that can be bought in those dual syringes, like this. Just pour some epoxy in the tip and jam the pole in. It will lubricate the pole and it might want to pop out of the tip, so I had fixed the tip in a vise and spent about 5 minutes pressing the pole downward in the tip to make sure it was set at the bottom.

I can happily say that the tip repair/change is still holding over 8 years later. Epoxy is probably a totally permanent solution although if those poles ever break, I will try to punch the tips off, just to see if it's possible.

Here are a few interesting data points from the cross-country skiing world which shows a heat gun (or boiling) and hot glue/a hot glue gun being used to replace the tip on a ski pole: https://youtu.be/3NpCYOW7s-k and https://youtu.be/SBNVS29cdUs . Looks like the ideal solution, albeit requiring specialized equipment. However there's a simpler version at https://youtu.be/WhGXoKWeYTQ which just uses boiling and a lighter instead of a glue gun to melt a "glue stick".

Not the answer you're looking for? Browse other questions tagged gear gear-care repairs trekking-poles or ask your own question.

14
Trekking poles: what are the pros and cons of Anti-shock vs standard designs?
6
What refilling material or glue did you chose to resole your trekking shoes? (What works, what doesn't)
16
What are the advantages of different locks for collapsible trekking poles?
13
Trekking Poles - Carbon Fiber vs. Aluminum
10
Should I use one or two trekking poles?