At what angle should an ice screw be screwed into the ice?

Recently we were climbing up a glacier with the ice at an angle of around 80°. We were placing the ice screws angling slightly upwards with respect to the slope of the ice wall.

However, one from our team, who stays in Norway said that the screws should always be angled downwards such that the weight is taken completely by the threads of the screw and not by the ice patch surrounding the ice screw. Apparently, this is how he was taught by a guide while climbing up a frozen waterfall.

For us, it felt natural to angle up the ice screws so that in case of a fall, the screw held on to the ice (similar to angling the pegs of a tent away from the tent). The claim that the weight of a fall should be taken completely by the ice screw and its threads seems a bit risky to me.

So is the claim correct? What's the general practice? Does the practice vary for a waterfall climb (as damaging the ice there could potentially lead to a whole slab of the waterfall falling off?)?

All of the resources that I can find say that it should be done with the screw tip pointing up and the hanger below with up to a twenty-degree angle from horizontal.

Contrary to what you might think, the best angle for the screws is slightly upward, meaning the hanger is slightly lower than the teeth in the ice. This counterintuitive method is better because the holding power comes from the threads themselves and not from a “snow picket” effect, meaning you don’t get any mechanical advantage having the shaft of the screw levered against the ice (Fig. 2).

How to Build Bomber Ice Anchors

More surprising were Harmston's findings about screw angle. As it turns out, screws hold much better when they're angled in the direction of the falling force, as in the second scenario above. Perhaps needless to say, this is not intuitive. Much of the force is then resisted by the threads rather than the girth of the screw itself. This isn't a small difference either: an ice screw placed at a downward angle is as much as twice as strong as a screw placed at an upward "negative" angle.

Gear Physics: How Ice Screws Keep Ice Climbers from Falling to Their Deaths

Limited testing by Chris Harmston of Black Diamond and Craig Luebben about 10 years ago showed that ice screws with the hanger end angled down (negative angle) up to 20 degrees were stronger than screws with the hanger parallel to the ice or angled slightly up (positive angle). A negative angle does not, however, increase the strength of the threads; rather, it decreases the chance that the ice will blow out from under the screw.

Should I Angle Ice Screws Down?

It was once thought necessary or beneficial for ice-screws to be place horizontally or with the hanger up for optimum hold. However, it has since been found experimentally that a screw place with the tip angled up often holds as well or better. This surprising result is thought to be due to the previously underestimated role of the threads in holding the screw in place. However, horizontal placements are usually recommended.

So you would want to angle the tip up into the ice with the hanger pointing down.

It shows the most obvious difference with a 13cm screw in what he calls medium strength ice: 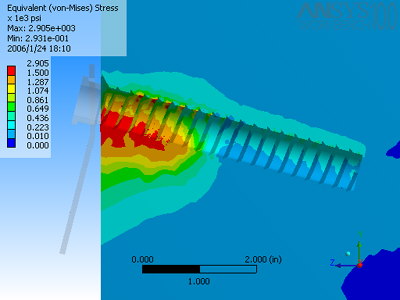 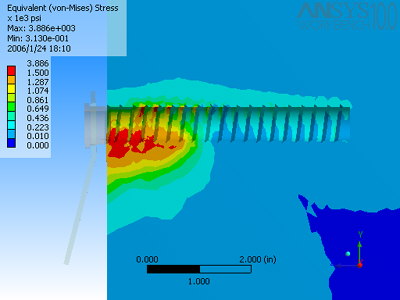 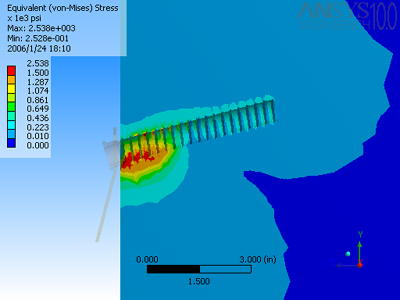 As the above figures show, placing your ice screws at a negative angle will reduce the stress in both the ice screw and the ice. 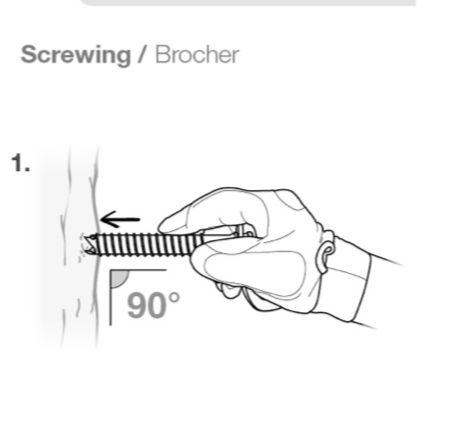 Not the answer you're looking for? Browse other questions tagged safety gear climbing ice-climbing ice-screws or ask your own question.

4
How and when to sharpen ice screws?

23
How do I know what size ice axe I should get?
16
Should a carabiner ever be clipped to the tie-in loops and should anything other than a carabiner ever attach to the belay loop?
5
How does cam strength change with the retraction angle?
9
What crampon front-point setup options are specific for various types of ice climbing?
11
Under what circumstances would you not use a recently planted ice screw?
25
How should I vet belayers? What should I look for?
17
What are the pros and cons of ice axe leashes?
6
What features should I look for in a satellite emergency device?
12
What is the intention behind webbing the rope through snow?
5
Should I take my weight into account when buying and retiring climbing equipment?